5. The Bicycle Kick Save

Reto Berra may no longer be a Flame, but in the lone full season he played with the franchise, he managed to burn his memory permanently into the minds of Calgary fans and players alike in one single game.
On November 20th against the Columbus Blue Jackets, Jack Johnson came dangerously close to grabbing the 1-0 lead over the home team. But Berra said no. In the fanciest, most gripping way imaginable.
In what announcers called an “around-the-world” type save, Berra went all ninja-like, dove and rolled from chest to back, stacked his pads in the air with a kicking motion and committed absolute robbery on Johnson.
Easily the save of the Flames’ season, and one that was played over and over in highlight reels for weeks to follow.

Eric Nystrom was drafted by the Calgary Flames in 2002 and spent three seasons donning the flaming ‘C’. Since leaving Cowtown as a free agent, Nystrom has bounced around from team to team and is now playing comfortably as a member of the Nashville Predators. And as a Predator back in the Saddledome on January 24th, Nystrom had a monumental night. Of the four goals scored by the visiting team, he scored…all four.
And yet for all of his efforts, Nystrom did not end up being the star of the night. After the Flames erased a 4-2 deficit to tie the game in regulation, it took four rounds in the shootout to solve the game. And it was Sean Monahan’s shootout winner that defined the Flames’ unofficial rebuild motto of “out with the old, in with the new.”

Johnny Gaudreau created a lot of buzz when, after being drafted by the Calgary Flames in 2011, the diminutive forward chose to spend a season or two pursuing a post-secondary education and a career in college hockey. And while Flames fans were disappointed that their fourth-round draft pick would be donning a Flames sweater later rather than sooner, the decision has clearly worked out to be a good one.
After a remarkable two seasons with Boston College developing a ridiculous amount of skill, Gaudreau gained the attention of the professional hockey world, the 2014 Hobey Baker Award and a nickname that speaks for itself: Johnny Hockey.
Just hours after accepting his Hobey Baker Award on April 11th, Gaudreau was signing his entry-level contract with the Calgary Flames.
And what better way to celebrate the signing by scoring his very first NHL goal in his very first NHL game in the Flames’ bittersweet season-closing game against the Vancouver Canucks? 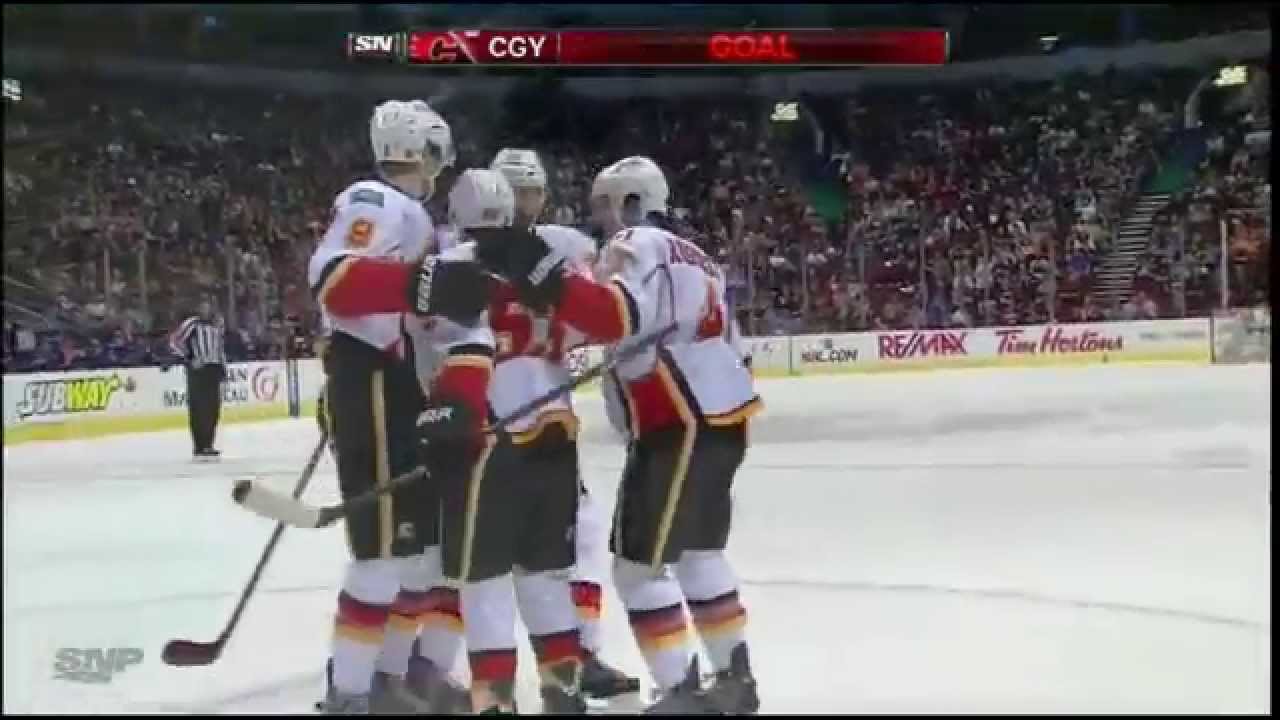 Sean Monahan has become so much more to the Calgary Flames than he was expected to be since being drafted last year. Picked sixth overall in the 2013 NHL Entry Draft, Monahan’s name was somewhat overlooked amongst the clamour for Nathan Mackinnon, Jonathan Drouin, Seth Jones, Aleksander Barkov and Darnell Nurse. And yet aside from Calder shoe-in Mackinnon, (who could potentially have had some serious competition from Monahan if not for the seven games he missed to a hairline fracture in his left foot) no other first-round rookie has made such waves in the NHL in his first season as the young Flames forward.
And on March 30th, 2014, Monahan did something the franchise hasn’t seen from a rookie since iconic Flame Jarome Iginla back in 1996: score 20 goals before the end of the regular season.
With that achievement, Monahan has become somewhat of a human foreshadowing of what he will be to the new-era Calgary Flames. It may be a bold and premature statement, but the difference that Monahan’s presence has made with the team in one short season is akin to the presence of Iginla in his early years as a Calgary Flame.

The 2013-2014 season was the first season that the Calgary Flames fully embraced a much-needed rebuild. And while the word rebuild does not exactly carry pleasant connotations for the team and its fans (for the first few seasons, anyways) the Flames somehow managed to make it a not-so-depressing experience.
The 2013-2014 roster, rejuvinated and teeming with fresh young faces, forged a new identity for the franchise: one of nose-to-the grind, blue collar work ethic and a never-give-up attitude.
They gave fans the most exciting Calgary Flames hockey played in over a decade.
And although the team completed the season 27th in the league, the lowly finish awarded the team its first ever top-five pick in the upcoming draft, giving more hope and substance to a ever-improving team.
Season one of the Flames’ rebuild is in the books, and as far as rebuilds go, this one is as good as it gets.