All sports have their traditions, but I’m a firm believer that the those found in the NHL are the best. From spending a day with Stanley to the singing of the national anthem, hockey is full of rituals that make it the greatest sport on earth.

From personal experience, I can tell you that the performance of “The Star-Spangled Banner” by Jim Cornelison is something every hockey fan needs to be a part of at least once. If you don’t know what I’m talking about, here’s a little explanation: when the national anthem is sung at the United Center before a Hawks game, the fans scream at the top of their lungs from the moment Mr. Cornelison opens his mouth to the final “brave.” [By the way, if you like this post we can send others like, about once a week, it to your inbox – just click this link]

No one is really one hundred percent positive where this tradition came from, but it’s electrifying nonetheless. Some speculate it started in 1982, when the fans started yelling wildly towards the end of the anthem to cheer the Blackhawks onto victory against the Vancouver Canucks. Others say the tradition started on May 9, 1985, when Chicago was about to take on the Edmonton Oilers in Game 3 of the conference finals.

Before Game 3, the Hawks has lost the past two games, 11-2 and 7-3. During the previous games, which were played in Edmonton, the fans chanted and yelled loudly during “The Star-Spangled Banner,” and some American fans saw this as an insult. Alas, when the series came back to Chicago, the Hawks fans were itching to get back at the Oilers. As Wayne Messmer began the anthem, Chicago Stadium became increasingly loud as fans cheered through the entire song. The Blackhawks then went on to win Game 3, 5-2, as well as Game 4, although they eventually lost the series. However, from there, a tradition was born.

The boisterous singing continues to this day and really is something to see. 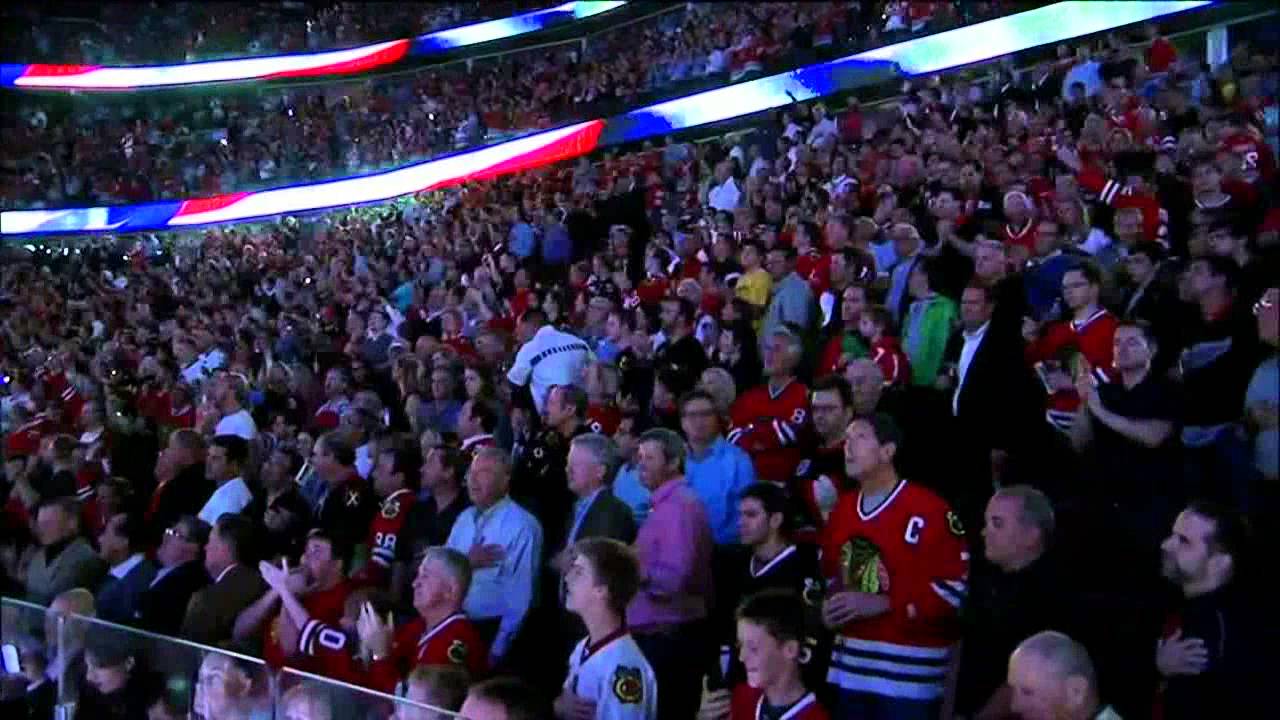 It’s hard to find a better tradition than lucky facial hair, if you ask me. This superstition started in the 1980s by the New York Islanders, when the team played four games in five nights and apparently just didn’t have time to shave. Beards grew and so did the tradition of the playoff beard. This ritual continues on today and goes like this: a player will stop shaving once his team enters the playoffs and continue to grow his beard until his team either is eliminated or wins the cup.

The playoff beard has spread to almost every level of hockey within the United States and is even a common occurrence throughout some European leagues. In recent years, the beard has become more than just a superstition for the players; in 2009 the Beard-a-Thon campaign was started encouraging hockey fans to grow their beards for charity. In the past four years, the charity has raised and donated two millions dollars. Apparently the beard has some real power.

Sometimes I wonder how people come up with these ideas. Honestly, who goes to a hockey game thinking it would be fun to whip a slimy, eight-limbed creature onto the ice? I don’t know, but it’s become a pretty amusing custom at Joe Louis Arena and is known throughout the National Hockey League.

The Legend of the Octopus began in 1952, when brothers Pete and Jerry Cusimano decided to toss these sea creatures onto the ice during a Wings game against the Toronto Maple Leafs. The octopus’ arms symbolized the eight wins that were needed in the NHL at that point to clinch the Stanley Cup. After the octopi were flung onto the ice, Detroit went on to sweep the Leafs and the Montreal Canadiens, eventually winning the Cup, and two of the next three, as well.

After that, the tradition of the octopus stuck and still remains a practice today. Detroit’s fans have even gone as far as developing proper “octopus-throwing etiquette.” The Red Wings organization has also embraced the custom and now hangs two octopi from the rafters during the playoffs. The team has even gone as far as to have an unofficial mascot – a large purple octopus named Al.

My only remaining question is how does one smuggle an octopus through arena security?

Hockey fans are crazy – crazy enough to hurl newly-purchased merchandise onto the ice just because a player scored three goals. I will admit, though, three goals in one game is quite a feat and deserves a unique celebration.

The practice of throwing hats started in Guelph, Ontario, when the hat company Biltmore Hats awarded a new hat to any player scoring three goals in one game. Somehow the tradition evolved from players being given hats to fans flinging them onto the ice. Yet it’s not quite known how the custom changed.

In Florida, fans celebrate the hat trick a bit differently and throw plastic rats instead, calling it a “rat trick.” At this point, the National Hockey League has banned the throwing of anything besides hats onto the ice. Although this ban hasn’t stopped anyone from throwing rats, octopi, or even catfish, hats are still the most common and symbolize an exciting occurrence in the game.

The Stanley Cup is without a doubt the best trophy in professional sports. Ice cream has been eaten out of it. Champagne has been sipped from it. It’s been in the shower with Steve Yzerman. This thing is like the Holy Grail to hockey players and is treated as something truly amazing.

After winning the Cup, the captain of the victorious team always receives Stanley first and is the first to kiss and skate it around the ice. The trophy then makes its way through the team, being hoisted by all the players and coaches. If you’re a hockey fan, chances are you’ve seen a Stanley Cup celebration before, and chances are it gave you goosebumps. Personally I think watching these grown men smile ecstatically and hug a large silver cup is one of the best things you could witness. It’s just pure joy.

After the on-ice celebration, the team usually continues to celebrate by drinking some kind of alcoholic beverage out of the Cup. After that, the trophy travels around the world, spending a day with each player on the team. The Cup has pretty much been everywhere imaginable, from the beach to Afghanistan. No matter where the Cup goes, though, it seems to bring fans of the sport, as well as the players, quite a bit of happiness, and that’s why it has to be the best tradition in hockey.

A Sport Full of Traditions

There are far more hockey rituals than just these five, some well-known and some that are practiced only by one of two teams. Some are decades old, while some are just beginning. Regardless, I think we can all agree that this sport is full of the greatest traditions in the sporting world. I mean, come on, you can’t beat octopi being launched onto the ice.

There are many more traditions in hockey, we’d love to hear about some of your favourites. Feel free to share them with us below.

15 thoughts on “The Top 5 Traditions in Hockey”