The 2015-16 season has started off on an odd note for Chicago Blackhawks captain, Jonathan Toews.

Also known as ‘Captain Serious’, Toews has been less of a scoring threat this year, and more expected to be seen sitting in the penalty box.

After hoisting the Stanley Cup in three of the past six seasons, Toews would have no reason to alter his style of game. So, is it simply his raw emotions taking over more often? Or, is he frustrated with his lack of scoring? It is tough to say, given that not even Daniel Negreanu could read Toews’ poker face.

Let’s quickly breakdown the numbers for Toews’ year, through about a quarter of the season. In 17 games, he has scored 5 goals and 11 points, good for fifth on the Blackhawks. He has also racked up 22 penalty minutes, the leader in that category on his team. The root of those 22 minutes? Well, that would be his two fighting majors within the past week.

Jonathan Toews… Is a Fighter?

Over the course of Toews nine-year NHL career, he had just three career fights before this season. The first came on November 18th, 2008, against Martin Hanzel, who was declared the winner by 69.6% of votes. The scrap came 15 seconds into the third period, with the Blackhawks leading the game 2-1. They went on to win 3-2 in a shootout.

Then, the next year, on January 2nd, 2010, Toews decided to drop the mitts with David Backes, who was declared the winner by a whopping 90.8% of voters. This one came 44 seconds into the second period, with the game tied at two. The Blackhawks would go on to win the contest 6-3.

The last one before this season, came on February 15th, 2013, against San Jose Sharks captain, Joe Thornton. The fight was a result of a boarding penalty Toews was receiving for a hit on Thornton. The game was currently tied at 0, and the Blackhawks would win 4-1 in the end. This time around, 90.1% of votes said Thornton was the winner.

All vote results were provided by hockeyfights.com. So, Toews certainly does not fight because he is good at it. However, the Blackhawks went 3-0-0 in games where Toews fought.

Now in 2015-16, Toews has fought for the first time in over two and a half years. Was it for good reason though? The first came on November 6th, against the Devils, Adam Henrique. This time around, Toews fared much better, garnering 88.3% of votes for the win. The result of the fight occurring came directly after the Devils had taken an early 2-0 lead in the first period. After the ensuing face-off and a quick whistle, Toews seemed to be having a few words with Henrique. Toews then gave him a cross check in the back, to which Henrique took exception, as the two drop the gloves for a good tilt. Toes received 88.3% of votes for the fight, but the Blackhawks lost the game 4-1.

It would not take Toews nearly three years for his next fight however, as he found himself throwing fists with St. Louis Blues captain, David Backes, a week later. On November 14th, with Chicago leading 1-0, Backes followed the play behind the Blackhawks net, where he delivered what looked like a check from behind on Niklas Hjalmarsson as he tried to break out the puck. Toews immediately came to his defence, dropping the gloves for the second time in his career with Backes. This time around, Toews received 60% of votes, but it was clearly a Toews win. The Blackhawks went on to 4-2. 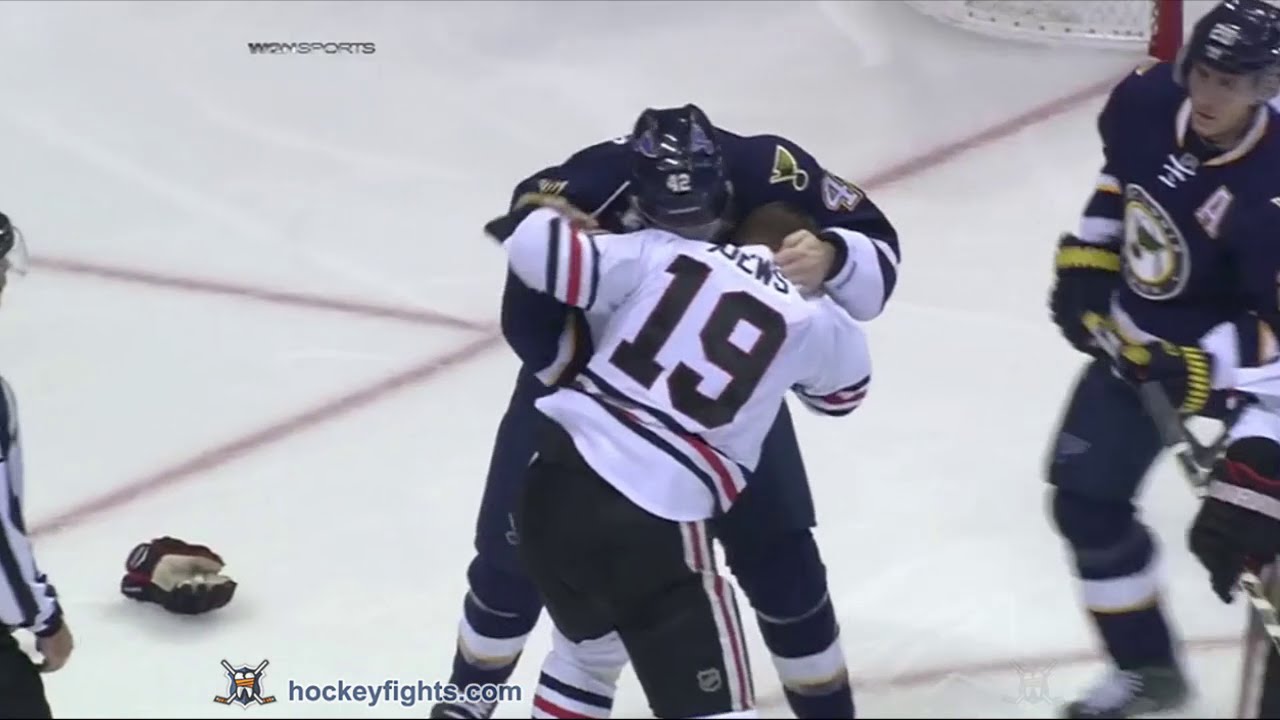 Why Is Toews Fighting More Often?

Don’t get carried away, Toews is not becoming Chicago’s newest enforcer. Although he fought twice within a week, the reason was fairly justified for each. In the first, he was likely frustrated with the Hawks poor start to the game and was looking to get his team energized.

As for the second, against Backes, it was a direct result of a hit from Backes which could have easily injured Toews’ teammate. As captain, it was fantastic of him to step in and protect Hjalmarsson, not to mention he and Backes aren’t exactly the best of friends.

Another correlation between who Toews chooses to fight, is that they are often the leader of the opposing team. He fought Backes twice and Thornton once, the captain of their respective team. This year, Henrique has also been one of the best and most dangerous players on the ice for the surprisingly hot Devils.

Another positive note for the Blackhawks; They are a combined 4-1-0 in games when their captain drops the mitts. Of course they would rather have him out on the ice than sitting in the sin bin, but you cannot complain with that record.