No matter what road the Philadelphia Flyers take leading up to the trade deadline, one obvious need they have is on the left wing. There is a marked drop-off in offensive production among Flyers forwards after their four best (Giroux, Schenn, Simmonds, Voracek). Those four players have combined for 61 goals, which is nearly half of the Flyers’ season total. Needless to say, they could use some help.

I’m on record as saying I don’t believe Philly should get carried away at the deadline, but if they have a chance to address this need with the long term in mind, they should take it.

Plagued by injuries and a virtually nonexistent offense, the Detroit Red Wings are about to say goodbye to a postseason streak that is older than Dylan Larkin. It’s a foreign set of circumstances for Detroit, but the potential exists for the Red Wings to move a player or two in exchange for future value.

If the Flyers go shopping, they may find exactly what they’re looking for in Hockeytown.

Tomas Tatar will become a restricted free agent at the end of this season. With the Red Wings’ young depth at forward positions, it’s possible that they would consider trading him instead of re-signing him. In fact, at least one team has already kicked the tires on a possible deal. 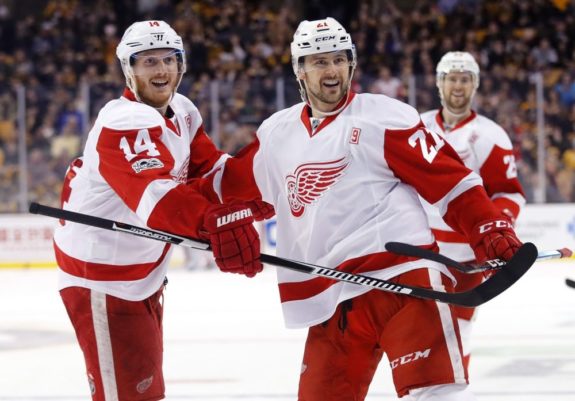 Tatar and teammate Gustav Nyquist have both been mentioned in trade speculation. (Winslow Townson-USA TODAY Sports)

Tatar’s production has dropped since his 2014-15 campaign in which he scored 29 goals, but those glimpses into his ability should still be fresh enough in everyone’s mind to think that he can get back there.

The RFA tag makes him a bit of a risk to trade for, but if Philadelphia would be willing to make a long-term investment, the 26-year-old left winger could certainly end up paying dividends. A sniper by trade, Tatar would make an immediate impact on either of the Flyers’ top two lines.

His best home would be on a line with Giroux and Voracek, two players who are excellent at getting the puck to their teammates on scoring chances. If necessary, though, he would also benefit from the brutal style of play employed by Schenn and Simmonds.

For a team struggling to find secondary offense, why not add another primary scorer like Tatar at a shallow position? 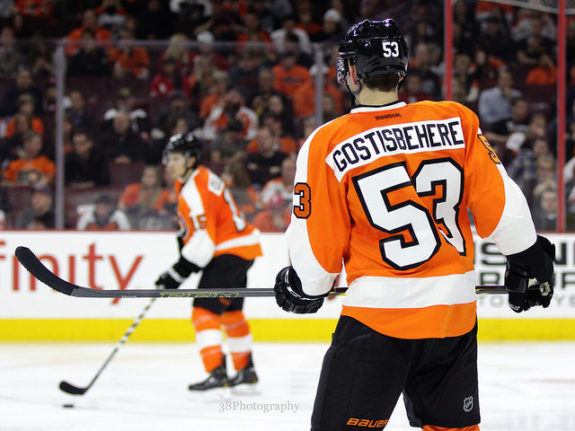 In any trade scenario, no matter how sensible, there is always a price to be paid. Detroit will not be able to drive too hard a bargain for a player set to hit free agency, but they would almost certainly ask for one of the Flyers’ top defensive prospects. Fans of the orange and black are anxiously awaiting the arrivals of Robert Hagg, Sam Morin and Travis Sanheim, but if they want to add offense, they will probably have to part with one of these young players.

With Shayne Gostisbehere and Ivan Provorov already contributing at the NHL level, the loss of a prospect would only hurt momentarily. The Flyers would still have two solid defensive pairings, which is more than many NHL teams can say, and they would strengthen their top six at forward.

Philadelphia plays in a division full of teams that score goals at an absolutely alarming rate. Tatar has a 20-goal floor, and in the right situation he could probably come close to doubling that. He fits the Flyers’ roster, and assuming they would sign him to a long-term deal, he is not going to garner anything in the neighborhood of a max contract.

The Flyers are obviously not a team that is going to enter into any three-month rentals at the deadline, but a move like this would be made with an eye on the future. That future is bright, and perhaps with a player like Tatar in the fold, it could be even brighter.