While draft day is always exciting for the best young players in the world and their families, some of them always seem to slip through the cracks and elude the best NHL scouts. As a result, there have been scores of diamonds in the rough who never heard their name called on any given draft day. These players can be late-bloomers, undersized players or even players with a bad attitude on and off the ice.

However, we all know that some of these high draft picks don’t pan out and never become quality NHL players: Kyle Beach, Thomas Hickey, Hugh Jessiman, A.J. Thelen, Marek Zagrapan and Lauri Tukonen are all top-15 draft picks that never player in the NHL or only dressed for a few games.

On the other end of the spectrum we find players that were never drafted such as Curtis Joseph and Adam Oates, and who had to overcome multiple challenges to reach their goal and make it to the greatest show on Earth. They defied all odds and managed to achieve their dream by working hard, persisting and never giving up!

The unheralded rookie turned a lot of heads this season after recording 39 goals and 41 assists for 80 points in 75 games for the Norfolk Admirals of the AHL last campaign. Conacher was signed as a free agent by Norfolk on July 6, 2011. Conacher’s highly successful season was rewarded with a two-way contract in Tampa Bay and with the Les Cunningham Award as the league’s MVP, becoming just the fourth rookie to win it since it was first presented in 1948!

The 5’8” 180-lb speedster is off to a blazing start this season with the red-hot Lightning, having recorded 5 goals and 7 assists for 12 points in only 8 games, to go along with a +7 rating. Look for the 23-year-old Conacher to battle with Vladimir Tarasenko, Nail Yakupov and Alex Galchenyuk for the Calder Trophy this season.

After playing four years with the Bemidji State University, Read was signed by Philadelphia in March 2011. After finishing the season with their AHL affiliate in Adirondack, Read made the team out of training camp last season. The 26-year-old forward was very important to the Flyers’ success last year notching 24 goals and 23 assists for 47 points in 79 contests with an impressive +13 differential. A very good two-way player, the future is very bright for the Ilderton, Ontario native and Read is currently the Flyers’ leading scorer with 7 points in 9 games this season.

A former roller hockey player, Burrows, 31, played in the ECHL and the AHL before making an impression with the Manitoba Moose in 2005. Alain Vigneault, who was the Moose’s head coach at the time, made sure the Vancouver Canucks signed Burrows because he was impressed by the feisty winger. After being called-up by the Canucks midway through the 2005-06 campaign, Burrows never looked back. 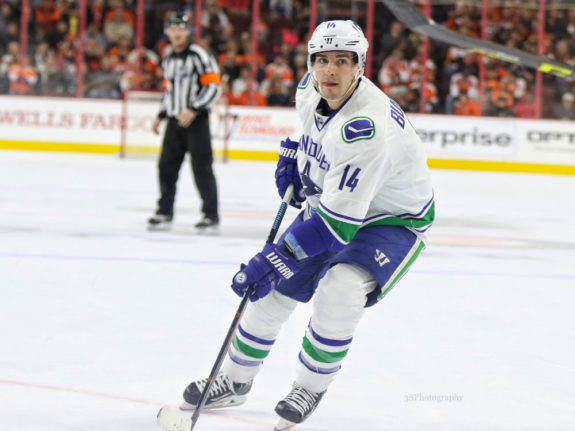 However, it took a few seasons for the native of Pincourt, Quebec to become an offensive threat, which he did when he recorded 51 points in 2008-09. Now playing mostly alongside the Sedin twins, Burrows potted 28 goals and added 24 assists for 52 points in 80 games last season. Burrows also finished with a +24 rating on the season. Interesting fact: Burrows has posted a +114 differential over his career (531 games).

One of the most spectacular defensemen in the NHL, Boyle was a key component of the Tampa Lightning Stanley Cup conquest in 2003-04. Over his illustrious career, Boyle, 36, has recorded six seasons of 50 points or more and has played for Team Canada many times. Signed as a free agent by the Florida Panthers in 1999, Boyle was traded to the Lightning for a 5th round pick in January 2002. After a few successful seasons with the Bolt, Boyle was sent packing to San Jose with Brad Lukowich in exchange for Matt Carle, Ty Wishart and a 1st round pick. The Ontario, Ottawa native has recorded 511 points in 840 career games. This season, Boyle is off to a great start for the surprising Sharks, notching 2 goals and 4 assists for 6 points in 7 contests.

Signed as a free agent by New Jersey in August 2005 after playing four years in the OHL with Belleville and Kitchener, Clarkson has never been known for his offensive talent, but rather for his feisty and gritty style of play. However, last season Clarkson turned into a very useful asset for the Devils, scoring 30 goals and adding 16 helpers for 46 points in 80 games.

Clarkson also added 138 penalty minutes for the Devils, proving he has become one of the best power forwards in the league. So far in 2013, Clarkson has 5 goals and 4 assists for 9 points in 8 games for the low-scoring Devils, showing he is not a one-year wonder.

The diminutive pivot was ignored by NHL scouts mainly because of his size (5’6”, 175-lb) despite piling up points at every level he played. In 262 games with the Chicoutimi Sagueneens of the QMJHL, Desharnais recorded 374 points before going undrafted. Signed as a free agent by Montreal in 2008, Desharnais had to overcome many challenges to make it to the NHL.

After playing one year in the ECHL in 2008, during which he led the league in points with 108 and was named the rookie of the year, Desharnais graduated to the AHL. Then, the 25-year-old never looked back and was finally called up for good midway through last season. Last year, the Laurier-Station, Quebec native was very impressive playing alongside Max Pacioretty and Erik Cole on the Habs’ first line. In 81 games, DD recorded 16 goals and 44 assists for 60 points, to go along with a good +10 rating for the cellar-dwelling Habs.

One of the best-hidden secrets in the NHL, Purcell was traded with a 3rd-round draft pick to the Tampa Bay Lightning in exchange for forward Jeff Halpern at the 2010 trade deadline. Since the trade, Purcell’s offensive production sky-rocketed alongside star players such as Steven Stamkos, Martin St. Louis and Vincent Lecavalier. After a very good 2011-12 season during which he recorded 24 goals and 41 assists for 65 points in 81 games, Purcell is off to another strong start with 2 goals and 7 assists for 9 points in 8 games. At an affordable salary of $2,362,500 this season, Purcell is quite a bargain!

Currently playing on the Penguins’ first line with Evgeni Malkin and James Neal, Kunitz was acquired from the Anaheim Ducks with forward Eric Tangradi in exchange for rearguard Ryan Whitney in February 2009. He was a key cog in the Penguins’ 2009 Stanley Cup run. Signed as a free agent by the Ducks in 2003, Kunitz, 33, had another good season in 2011-12, notching 26 goals and 35 assists for 61 points in 82 games. With five seasons of 20 goals or more, the gritty left winger has made a name of himself by driving hard to the net and defending his teammates by dropping the gloves when necessary. This season, Kunitz is keeping the pace with 5 goals and 5 assists for 10 points in 9 games to go with a +6 rating.

One of the most under-appreciated player in the league, Girardi finally received some recognition last season when he was invited to play in the All-Star game in Ottawa. Signed by New York in July 2006, Girardi, 28, went undrafted after playing five years in the OHL with London, Guelph and Barrie. Not the most flashy player, Girardi has been a mainstay on the Rangers’ blue line since his first full-season with the team in 2007-08. The Welland, Ontario native recorded 211 hits (21st) last season, while blocking 185 shots (5th). Girardi also finished fourth in the league in time on ice/game, playing an average of 26:14 minutes per/game for the Blue Shirts. Girardi is off to a tough start this season, with only 2 points and a -3 plus/minus differential in eight games with the .500 Rangers.

The ageless wonder is showing no signs of slowing down, even at the ripe age of 37. Through 8 games, St. Louis has notched 3 goals and 11 assists for an impressive 14 points along with a +3 rating. The speedy St. Louis managed to record 25 goals and add 49 helpers for 74 points in 77 contests last season, despite missing five games after sustaining facial and nasal fractures when he received a puck in the face at practice.

With already six seasons of 80 points or more, the Laval, Quebec native has scored at least 25 goals in his last nine NHL seasons! Signed by Calgary as a free agent in 1998, the right winger never managed to stick with the Flames. As a result the Lightning signed him as a free agent in 2000. St. Louis was a key component of the Lightning’s Stanley Cup run in 2003-04.

Please note that goaltenders where excluded from this top ten, which is the reason why players like Antti Niemi are not mentioned above.

Who will be the next undrafted gem to make it to the NHL next season?