Here is my list of the Top 10 Late-Round NHL Draft Picks Since 2000. I have selected ten players from rounds seven-nine (when applicable) since the year 2000 that have been a consistent contributor towards their respective team’s success. They are in order of the year, and then draft number. 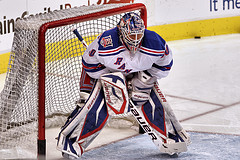 After being drafted by the New York Rangers in the seventh round of the 2000 draft, Henrik Lundqvist entered the NHL in 2005-06 where he played 53 games with a record of 30-12-9. Since then, the now 28-year-old has been the Rangers’ number one goaltender, and one of the most consistent in the league. He was nominated for the Vezina Trophy in each of his first three seasons, while also being the only netminder in NHL history to record 30 wins in each of his first five seasons. With “King Henrik” leading the Swedish men’s hockey team to Olympic Gold at the Winter Olympics in Torino, just about the only thing this goalie hasn’t done is win the Stanley Cup. Pretty good for a seventh round pick.

Although Marek Svatos has been on a downwards slope over the past couple seasons, juggling the 2010-11 season between the KHL, St. Louis Blues and currently the Nashville Predators, the Slovakian native scored 32 goals and 50 points in his first year playing pro with Colorado in 2005-06, and for the next three seasons scored over 30 points in an average of 65 games per-season. Some might say Svatos has hit a wall in his career, but Colorado sure got their use out of their seventh round pick for the five seasons he was with the club.

What a clutch role-player this guy is. Pittsburgh has been great at drafting some solid players of the past few years, and Maxime Talbot is a prime example. Although Talbot is only known to get roughly 25 points a season, his ability to play a two-way game and come up with goals when the team needs it most is endless. With 49 NHL goals over six seasons, eight of those goals have been game-winners in the regular season. Let’s not forget the playoffs, where Talbot has made himself known by scoring the tying goal in game five of the 2008 Stanley Cup Finals against the Detroit Redwings with just 35 seconds left to allow the Penguins to score in triple over-time. Although Pittsburgh ended up loosing to Detroit, in the rematch the following year, Talbot scored both the Penguins goals in game seven to win them the Stanley Cup; something the eighth round draft pick with always be remembered for. What a steal for the Pens.

What Tobias Enstrom lacks in size, he surely makes up in keen offensive hockey-sense and solid defensive roots. The 26-year-old blue-liner scored over 30 points from the back end in each of his first two seasons, while he scored a career best 6 goals and 50 points last season. Enstrom has only continued to impress this year by already setting a career-best 8 goals, while also adding 33 assists in just 50 games so far this season. For an 8th round pick, the Thrashers have developed Enstrom into one of their top defenseman, and remains to be a key component on their power play.

Now a teammate of Enstrom, the 6.05’’, 265 pounder adds size, strength, confidence and exceptional offensive ability to accent the much smaller Enstrom on the Thrasher’s blue line. Byfuglien proved he was able to play on all areas of the ice with the Chicago Blackhawks as he divided his playing time between defense and wing, and was a huge contributor to the Hawks Stanley Cup Championship. After being traded to Atlanta prior to the start of this season, he has returned to the blue line permanently, and leads all NHL defenseman with 16 goals, and sits fourth among defenseman in points with 41. Byfuglien could make a case at being possibly the best late round pick on the list.

Halak was instrumental in helping the Montreal Canadiens through their unexpected playoff run last season, and as the starting goaltender with the St. Louis Blues this season, he has proven that he has what it takes to be a starting goalie in the NHL. Although it is not uncommon for goaltenders to be selected in the later rounds, Halak seems to be more promising than some of the goalies that have been selected within the first two rounds in the past few NHL Entry Drafts. What great scouting by Montreal to harvest such a promising young goaltender.

Sometimes it doesn’t matter which round you were selected in, and Troy Brouwer is living proof that if you have the heart and the tenacity, you can make an NHL club. Brouwer is another exceptional late pick coming from the Chicago Blackhawks that gave them a chance to win the Cup. Brouwer is a hard-working power forward that is not afraid to drop the mitts and play any type of game that is required. Brouwer scored 40 points with 66 penalty minutes last season for Chicago, and continued to prove his worth with 15 goals, 14 assists and 25 penalty minutes this season.

This 25-year-old forward hasn’t had quite the chance to prove himself as many of the aforementioned players have, but Brandon Yip will remain a solid two-way player for Colorado, and he seemingly continues to improve game after game. Yip’s first NHL season was just last year where he played 32 games, racking up 11 goals, 8 assists, 19 points and a +5 rating. This season, his 9 goals and 17 points have contributed to the Avs’ secondary efforts, and the young Vancouver native plays a solid penalty kill while also achieving success on the power play when given the chance. Look for this eighth rounder to continue to improve and emerge as a consistent forward.

Although Pekka Rinne has battled with bouts of injury throughout his young career, he has still proven to be a solid goaltender that is a key-contributing factor to the Nashville Predators success year after year. Although the Preds may not have a big-name superstar like many teams throughout the NHL, they somehow continue to achieve success in the regular season and qualify for the post-season. His record over three full NHL seasons and three games as a call-up is 79-45-0 with a 2.37 GAA and .918 SV% – pretty impressive.

Another successful late pick for the Preds. The 24-year-old Swedish winger played his first season with Nashville in 2008-09 where he quietly notched 2 goals and 7 points in 28 games. The following season, Hornqvist played 80 games and picked up 30 goals and 21 assists with a +18 rating. Also in 2010-11, he played for Sweden in the 2010 Vancouver Olympics. This season, Hornqvist has racked up 16 goals and 12 assists in 48 games, and still shows the promise of being an effective secondary contributor that was chosen in the final round of the 2005 draft.