Trading your team’s captain on the day of the trade deadline is an unusual strategy. Two teams trading both of their captains at the deadline is so unusual that prior to the Ryan Callahan – Martin St. Louis trade last season, it had never happened. It was one that shocked both hockey markets as fans in New York said goodbye to a homegrown fan-favorite in Callahan, and Martin St. Louis said goodbye to a city he had called his home for over a decade. At the time, it was uncertain whether or not the deal would pan out for either team, as the Rangers were getting yet another 35+ year old superstar with two years left on his contract, and the Lightning were getting a player who would become an unrestricted free agent at the end of the season. On the night that Callahan and recent free agent departures Brian Boyle and Anton Stralman return to Madison Square Garden, it seems fitting to assess the trade and determine who came out on top so far.

Building for the Playoffs

After losing in the Conference Final in 2012 and falling short again in the Semi-Final the previous year, the Rangers were struggling to make it to that next level. At the trade deadline, and unable to come to terms with Ryan Callahan on a contract extension, Glen Sather looked for the missing piece to the puzzle to get his team to the next level. Enter Martin St. Louis.

St. Louis, a Stanley Cup Champion in 2003-04, had been a point-per-game player in the ten years since. At the time of the trade deadline, he had 29 goals and 32 assists for 61 points in 62 games and had been meshing well with superstar Steven Stamkos, so there was reason to believe that there was plenty left in the tank. St. Louis had also reached the conference finals with Tampa Bay in 2010-11 and scored 20 points in 18 playoff games, which indicated that he was still capable of being an elite playoff performer as well.

Callahan, by contrast, had put up 5 points in 12 playoff games the previous season, and the year the Rangers went to the conference finals, had only 10 points in 20 games. There is an element that Callahan brings to the team including shot blocking, hitting, and overall character that cannot be accurately measured but was certainly an element to the Rangers postseason success. 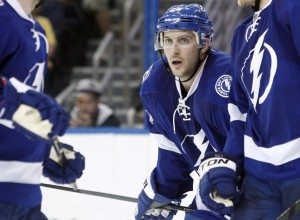 After the deal was done, St. Louis immediately struggled with just 1 goal and 8 points in 19 regular season games with the Rangers. Meanwhile, Callahan scored 6 goals and 11 points in 20 games with the Lighting, helping them edge out Montreal for second in the new Atlantic Division. The Rangers, sitting at 96 points compared to Tampa Bay’s 101, held second place in the Metropolitan division.

The Lightning ended up losing Vezina finalist Ben Bishop on April 8th to a dislocated elbow, thus causing them to ride backup Anders Lindback into the postseason. Lindback posted an unimpressive .881 save percentage and a 3.91 GAA in 3 starts against the Canadiens, and the Lightning were swept in four games.

Callahan did not register a point in the series and ended up -2, but it is unfair to criticize his performance considering the team lost primarily due to goal-tending.

Rangers Return to the Finals

During the Rangers’ march to the Stanley Cup Final, St. Louis tallied 15 points in 25 games, less than his usual point per game average, but managed three game-winning goals including an overtime winner in Game 5 of the Eastern Conference Final against Montreal.

Though his offensive production was valuable to the team, the turning point of the series against Pittsburgh and possibly the entire playoff run came with the untimely passing of his mother, France St. Louis.

Following Game 4 of the Eastern Conference Semi-Final, St. Louis received the news that his mother had died of a sudden heart attack at the age of 63. It was doubtful that Martin would play in Game 5, but after consulting his father, he decided that playing is what his mother would have wanted for him. The unimaginable emotions swirling around the Rangers dressing room propelled them to a 5-1 win to keep the Rangers alive at 3-2 in the series.

The emotions reached a fever pitch back at Madison Square Garden when St. Louis scored early in the first period of Game 6, on Mother’s Day, to help lift the Rangers to victory and force a Game 7 back in Pittsburgh.

After the game, St. Louis, who had received the team’s ‘Broadway Hat’ as player of the game after Game 5, was emotional thanking his teammates for their support.

The Rangers, who had been down 3-1 in a series 16 times before in franchise history and never won, did the unthinkable and clinched the series in Game 7 en route to the Conference Final against Montreal. After a 7-2 route of the Canadiens in Game 1, the team showed their support by attending France St. Louis’ funeral services in Laval, QC.

“What I can say is that the New York Rangers family has been touched by a little Quebec family in a deep, profound way,” Vigneault said in the aftermath. “[Sunday] was very emotional, very moving time for our team to have the opportunity to be there and to share that with Marty and his family. Marty took the stand, or the podium, however you want to call it, and shared some incredible moments. It was a very deep message and it was a challenging day for us.”

The amount of team bonding that occurred as a result of this unfortunate circumstance and the effect that it had on the success that the Rangers achieved in the postseason is unquantifiable. It is uncertain whether or not the Rangers would have gone as far as they did without the leadership and perseverance of St. Louis, but any way you look at it, the addition of such a high caliber person and player surely helped the Rangers get to the Stanley Cup Final.

Ryan Callahan was able to come to terms with Tampa Bay in the off-season on a six-year deal worth $34.8 million, a $5.8 million cap hit. Prior to the trade deadline, it was reported that Callahan was looking for a seven-year deal, but was willing to take a six-year deal in the ballpark of 6.25-6.5 million per, while the Rangers held firm at six-years $6 million. Perhaps the possibility of playing with Steven Stamkos for the foreseeable future was enough to take a modest pay cut and sign with the Lightning, but this is only speculation.

Regardless, Callahan is settling in as a top-six forward on the Lightning, and his stats this year indicate that he has found his form again; scoring 13 points in 13 games, including 2 game winning goals, and a beautiful shootout winner against Detroit on November 9th.

The only question that remains is whether or not Callahan can stay healthy, as he missed five games this season with a lower-body injury, and has missed 15 games in each of the previous two seasons. When he is in the lineup, Callahan is an impact player in more ways than one, helping the penalty kill move up from 23rd last season, to 13th so far this year.

St. Louis, on the other hand, has 13 points in 17 games this season. After a slow start, St. Louis has scored 5 goals and 2 assists in the past two weeks, and is finding chemistry with goal-scorer Rick Nash who is tied for the league-lead in goals and center Derrick Brassard who has 14 points in 17 games thus far.

The most notable difference isn’t the production of the players, but the performance of their respective teams. The Lightning are second in the Eastern Conference with 26 points and a 12-4-2 record, while the Rangers find themselves third in the Metropolitan division with 18 points and a 7-6-4 record. While both teams have dealt with injuries, the Rangers losses seem more significant considering top-line center Derek Stepan missed the first 12 games due to a broken fibula, and top defenseman and newly appointed captain Ryan McDonagh remains sidelined for 3-4 weeks with a separated shoulder.

It is too early to officially declare a winner or loser in this deal, but looking back on the playoffs and the start of this season provides needed context when evaluating the importance of these two beloved character players to their respective teams. Surely, both cities have embraced their newly acquired stars and both seem more than happy with the results.

It seems as though St. Louis has the edge for the moment considering the success the Rangers achieved in the playoffs last season. This could change, however, if the Lightning continue their fantastic pace and enter the playoffs healthier than they were a year ago.

Tonight, Callahan and St. Louis look to battle for more than just two points in the standings, they also have something to prove to their respective former managers who decided that the other player was the better option moving forward.