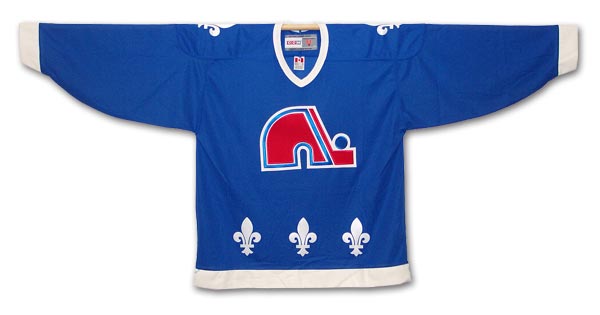 Gather round children, it’s story time. Once upon a time there was a mediocre hockey team in Canada called the Quebec Nordiques. They were so mediocre that Eric Lindros didn’t want to play for them after being selected by the team in 1991. But even though the supposed “Next One” did not wish to play for them, there were many other young stars that did.

In 1990, the franchise drafted the Irish-born Owen Nolan with their first overall draft choice. Nolan had a disappointing rookie year in 1990-1991, posting just 13 points in 59 games while suffering a minus-19 rating. But after his debut season, he was able to unleash his full potential. The power forward amassed 78 goals and 72 assists over the next two season and averaged more than a point per game for the rest of his tenure in Quebec.

The Nordiques finished in second place in the league during the lockout-shortened 1994-1995 campaign, but were ultimately knocked out in the first round of the playoffs. This lackluster performance, combined with a struggling Canadian economy and rising contract prices, forced the team to relocate to the Rocky Mountains in the United States in 1995. The Quebec Nordiques had officially become the Colorado Avalanche.

The San Jose Sharks entered the league in 1991 and drafted a number of players to form their team. With the 30th overall pick, the Sharks selected defenseman Sandis Ozolinsh in the 1991 NHL entry draft. Unfortunately for him, he suffered a knee injury that caused him to miss most of his first season in San Jose. However–  like Nolan– Ozolinsh became very successful in the ensuing years.

He was able to rack up 89 points in 129 games from the point while in teal and was part of San Jose’s playoff upset in 1994 against the Detroit Red Wings.

Unfortunately, the Sharks were decimated in the playoffs by the same Red Wings team a year later. Detroit swept the California franchise in the second round of the 1995 playoffs and never gave San Jose the lead in any of those four games.

After bitter playoff defeats for both the Sharks and the Nordiques, the squads elected to make a move very early in the 1995-1996 season. Not even 10 games into the year, the San Jose Sharks sent Sandis Ozolinsh, their star defenseman, to the newly relocated Colorado Avalanche in exchange for Owen Nolan. This deal would greatly benefit both franchises in the immediate future.

Ozolinsh was a force in his time with the Avalanche. In 333 games, he recorded 253 points and represented his new team three times in the NHL All Star Game (1997, 1998, 2000). In addition to this, he was a key player in Colorado’s 1996 Stanley Cup victory which saw them defeat a mind-boggling good Detroit squad in the Western Conference finals.

During his tenure in Denver, Ozolinsh set a large number of records for defensemen in team history. His defenseman records include most points in a season with 68, most points in the playoffs with 67, and most goals during the regular season with 72 over four years. Along with his many successes within the organization, he was also a finalist for the Norris Trophy for best defenseman in the NHL in 1997. This man was the complete package.

The complete package, however, was eventually dealt for another package from Carolina. At the 2000 Entry Draft, the Colarado Avalanche traded OzColoradoo the Carolina Hurricanes for Nolan Pratt and three draft picks. This move was very regrettable for the Avalanche in the short run as neither Pratt, nor any of the picks, panned out in the NHL.

Owen Nolan became an instant fan favorite in San Jose. His blend of physical and skilled play was exciting to watch and helped inspire an age of young hockey players in Silicon Valley. In his first two season as a Shark, he earned 124 points in 144 games, making him a bright spot on a bottom-feeding club. Like Ozolinsh, Nolan went to the All Star Game three times while in teal (1996, 1997, 2000), one of them being played in San Jose. This is where he famously called his shot for the hat trick in the event.

In 1998, Nolan was named team captain and led the club during their postseason upset of the St. Louis Blues the following year. His Game Seven goal from center ice would serve as the game– and series– winner.

No. 11 also earned two gold medals while playing in San Jose. His first one came in 1997, when he played with Team Canada in the World Cup of Hockey. The second came in the 2002 Winter Olympics where he helped Canada defeat the United States in the gold-medal game, spoiling America’s hope of winning another gold medal in men’s hockey in their home nation.

With San Jose poised to miss the playoffs, the team elected to sell the Irishman at the 2003 trade deadline to the Toronto Maple Leafs. In return, the Sharks received Alyn McCauley, Brad Boyes, and the Leafs’ first overall pick in 2003. He would finish his San Jose career with 451 points and 934 penalty minutes in 568 games.

While this trade helped both teams involved, it looks as if Colorado got the better deal by a very small margin. Ozolinsh was a big factor in the Avalanche’s 1996 Stanley Cup victory and was stable both offensively and defensively. His points per game came in at 0.76, which is just under Nolan’s 0.79. However, the defenseman’s points per game is more impressive due to the fact that he is… well… a defenseman. Colorado got a steady point producer that was also responsible in his own zone.

This is not to say that this was a bad move for San Jose. Nolan was a prominent part of the franchise and was one of the first players in San Jose history to be considered to have his number raised to the rafters. He was physical, a point-getter, and a leader, not to mention that he set numerous team records for the Sharks (most of them eventually being beaten by Patrick Marleau).

It was a close call, but Colorado’s Stanley Cup victory and Ozolinsh’s point production while on the blueline tipped the scales in their favor.