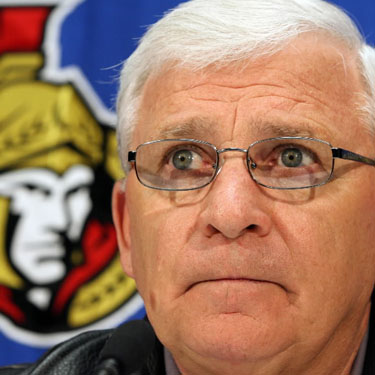 The trade deadline is fast approaching, and for the first time since the term “Spice Girls” became culturally relevant, the Ottawa Senators will be sellers. Herein lays a look at the big ticket items and blue light specials Senators GM Bryan Murray will have in the showroom.

With March having taken us all by surprised – almost like some form of jungle cat – the Sens unsurprisingly continue play out the stretch. Tuesday night, they host the Calgary Flames as part of a nine game home stand. While Ottawa traditionally fares quite poorly against Western rivals, and Calgary is an elite team poised to shellac the hapless Senators, this game is shaping up to be one of the more interesting on the team’s calendar.

The real intrigue in this one lies in the fact that this could be the last game for a number of Senators, some of them long-serving members of the team who played roles in the club’s past successes. For the first time since Bill Clinton enlightened us as to the alternate usefulness of a fine cigar and Jason Alexander had regular work in televsion, the Sens will be looking to shed bodies from a sinking ship. Yes, the Ottawas will be purging talent and salary as they sit 14 points out of a playoff spot.

Chris Neil, who is roughly $1M  apart from Sens’ management on a new contract is likely as good as gone barring some serious last minute concessions. His agent will talk with Senators GM Bryan Murray one last time Tuesday, but it doesn’t sound like the two sides are nearing an agreement. Neil has been a fan favourite in Ottawa and is willing to drop the gloves with impressive frequency, but his contract demands (he is seeking $2.5M/yr) are outrageous, and he has made himself replaceable. Neil has 2 goals this year, and rarely plays over 12 minutes. The rumours are that Neil could have a lot of value, but realistically, it would be shocking if the Sens received anything more than a third-round pick.

Filip Kuba is Ottawa’s de-facto number one defenceman, and the club cannot afford to lose him for nothing. Zdeno Chara and Wade Redden would have fetched substantially more than Kuba, but for a variety of reasons those players could not be moved and were thus allowed to walk without any return. The Sens simply cannot afford to do this for the third time in four years. Kuba has a no trade clause in his contract, but has said through his agent he will probably waive it. Rumours are that he could fetch a first round pick and a prospect, but a mid-level prospect and a 2nd-5th round pick is a more likely return.

While Kuba and Neil are almost certainly gone, there are other players who are somewhat less likely to be dealt but remain in play.

Antoine Vermette has turned up the heat after a slow start, registering 20 points in his last 25 games. He could garner interest, as he can provide speed, offensive depth, and solid penalty killing prowess to a team that may be a little thin up front. Vermette is locked in at a very reasonable $2.76M cap hit for next season, and with the Sens looking to clear salary to accomplish other goals, he is an unlikely but possible candidate to be moved. One rumour propagated in the Ottawa Sun has Murray trading Vermette to Columbus for surplus netminder Pascale Leclaire, though Murray would likely be put off by the 2 years and Gerber-like $3.8M left on his deal.

Jason Smith is a veteran defenceman who, like Vermette, is signed through next year at $2.6M against the cap. He has not been a good fit in Ottawa’s defence corps, as he is the antithesis of the type of player the club’s back-end has been lacking. Smith is most noted for his leadership abilities and willingness to play unselfish hockey, but his price tag and declining skills may render him an unattractive commodity. Don’t expect a big return, if any.

It could be argued that no player in the Nation’s Capital has seen his stock fall more this season than Christoph Schubert. After pitching a fit about being excluded from the club’s top-six defencemen at the conclusion of training camp, Schubert responded by playing his worst hockey since joining Ottawa full time in 2005. He has been a healthy scratch most nights in 2009, and has made dumbfounding decisions with the puck when he has played. The Sens will move him for anything they can get, and may try to waive him failing that.

While Bryan Murray has said everybody who does not have a no-trader  is in play, it is difficult to imagine anyone else being moved. Daniel Alfredsson, Dany Heatley, Mike Fisher, and Chris Phillips all have NTCs, so count them out of any trade discussions. Murray has repeatedly denied he is shopping Jason Spezza, so the much-maligned playmaking centre seems to be safe. Chris Kelly just signed an extension in the off-season and has three years and over $6M left on his deal. Anton Volchenkov is a career Senator who is rumoured to love playing in the city and, despite having an poor season, is a rich man’s Jason Smith while making less money. Nobody wants Martin Gerber, Mike Comrie is rumoured to be interested in staying in Eastern Ontario, Bryan Murray prizes Alex Picard and demanded he be included in the package he received for Andrej Meszaros, Nick Foligno and Brian Lee are seen as building blocks, and it’s difficult to imagine anybody else bringing back any value.

Having said that, there are almost always surprises on deadline day as the media rarely predicts what Sens management is planning, so what goes down is really anybody’s guest. Be sure to check out The Senate Committee for analysis of all of Ottawa’s moves, and general analysis of all deals live throughout deadline day.