Yes, it is officially time for the Vancouver Canucks to worry about Nikolay Goldobin. I’ll be the first to admit that perhaps I jumped on the Goldobin-negativity ship a little too early last season, but the excuses for this young man have all but sailed away.

Roses are red
Violets are blue
You know it's getting bad Goldy
When Rick is frustrated too https://t.co/8ch4AGWJpH

The 23-year-old Russian now has over 100 games under his belt as a Canuck over the past two-and-a-half seasons and he’s just not making the impact he should be. He’s currently sitting on 18 goals and 26 helpers and is carrying a -17 rating with the boys in blue and green in his career. The team is expecting him to be a top-six forward and I don’t think he’s even close, based on the Canucks’ style of play.

Off the top, I’d like to recognize Goldy’s remarkable amount of skill. He’s got hands, he can skate and he can shoot the puck. So, what’s the issue? Goldobin, plain and simply, has little-to-no compete level in most scenarios. When you look up and down the Canucks roster, it isn’t the most talented bunch, but the team collectively battles hard and is hard to play against. Goldy is not fitting that mould. 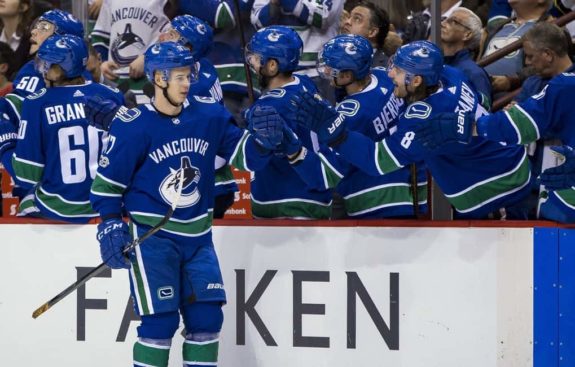 In his last 10 games, the Moscow product has two points and averaged 13:47 of ice time per-game over that stretch. The majority of his 25 points this season have come when he has played with Elias Pettersson and/or Brock Boeser, so you can’t really say he hasn’t had a shot. Beyond his top-line looks, he’s also seen a very healthy amount of time on the man advantage, where he’s scored eight points.

I know, I know, he’s still young. That’s fair, but he won’t be in a few years, and I’m not seeing anything promising from his game right now. What some people fail to understand is that, sometimes it doesn’t matter how skilled you are. If a player doesn’t buy in to a team’s philosophy and strategy, that player will more often than not, not succeed.

“I like a lot of things that Goldy does when he has the puck. It’s his play without the puck that we’ve really tried to improve on. To be an effective player in the league, you’ve got to be willing to fore-check hard when it’s there and turnover a puck and when you get into a puck battle be willing to really bear down and win a puck battle. At the end of the day, when you’re trying to win, it always comes down to your details and your puck battles and your fight for space.” – Travis Green on Sportnet-650.

The above quote was made in early December and Green was referencing how difficult it was to bench Goldobin who, at the time, was the team’s third-leading scorer. Currently, he is fourth in team scoring and honestly, I don’t think the message that Green was trying to get across was heard by Goldobin at all; we are still seeing that uninspired play that does not win hockey games.

What’s Next For Goldobin?

Goldobin’s entry-level contract expires after the 2018-19 campaign and decisions will need to be made. I really don’t think he’ll be going anywhere because he’s definitely falling into the buy-low category. The Canucks could probably ink him for a reasonably priced long-term contract and, realistically the staff see him as a long-term project. Then again, with some of the contracts being thrown around the league, the market could be completely out of whack this offseason. 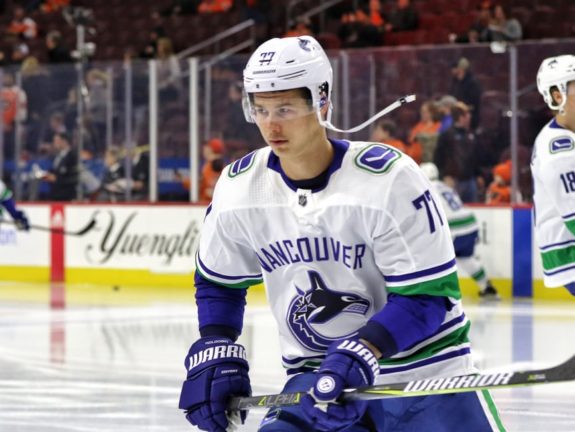 On the other hand, there’s some talented wingers in the Canucks system who could potentially fill the void down the road. A front-runner is Jonathan Dahlen who is notoriously dangerous alongside Pettersson. Outside of the system, there are also talented wingers on the market like Andre Burakovsky of the Washington Capitals who is similar to Goldobin across the board, but also has the edge in most categories: he’s one year older, was drafted slightly higher in the first round (23rd overall), he’s bigger and puts up more points, but most importantly, he competes harder.

However, the Capitals are likely looking for a return of a scoring winger who is more productive than Goldy and/or a seventh defenseman as they head into the postseason. Goldobin’s trade value isn’t superbly high at the moment, but he is a former 27th overall pick and obviously has potential, so there could be a chance of dishing him, but again, it’s highly unlikely.

I’m a little bit torn on the best course of action here. Flipping Goldobin at the deadline is a possibility, just so there’s a guarantee of a return. The other option is waiting until the offseason and trying to sign him to a great contract that doesn’t hurt the bank too badly and then keep hoping for him to elevate his game.

With that being said, I get the impression that if he doesn’t like the numbers on a potential qualifying offer from the Canucks, he’ll have no problem talking with other teams and exploring the possibility of walking. I don’t blame him, though, and he could possibly fit in nicely with a different team and different philosophy.

If I were in the hot seat, I’d try to flip him at the deadline. I really just don’t see him panning out long-term with his compete-level where it is right now.

Let me know what you think about Goldy down below! Is he a keeper? Do you share the same thoughts as me?

Canucks’ Josh Leivo Is a Key Cog for the Future

An Interview with Bobby Smith