Learning from those before us is an ideal way to avoid mistakes. The Vegas Golden Knights should learn from the Atlanta Thrashers and Columbus Blue Jackets who struggled at the draft table. Atlanta could never overcome their poor showings at the draft and were eventually relocated. Columbus, on the other hand, drafted few promising players aside from Rick Nash in their first decade of existence.

In their first try, George McPhee focused on building up the middle, which is why he drafted two centers in Nick Suzuki and Cody Glass with their two first-round picks in the hopes that one would develop into a franchise player. To win in today’s National Hockey League teams need an elite center.

Both players were on the roster for some preseason games, showing great promise. Nevertheless, both have gone back to their respective junior teams. Yes, drafting a center is important, but developing them well is vital. McPhee has experience with this from his time with the Washington Capitals. 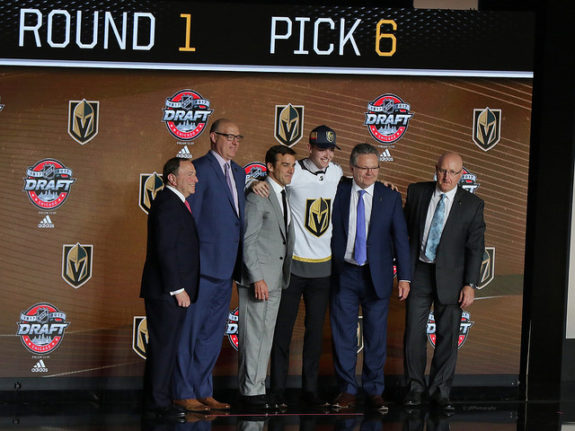 Starting at ground zero, Vegas wants to stock up on blue-chip prospects. This past draft, they used the expansion draft to accumulate picks, resulting in three first-round selections. Comparing situations, Columbus didn’t have multiple first-round picks until 2013. It took Vegas less than a year to accomplish these moves.

Still, it’s up to the scouting and developing departments to make sure they hit on their selections. Vegas doesn’t want to emulate Columbus who spent over a decade trying to build a contender.

With their first-ever draft pick, Vegas chose Cody Glass from the Portland Winterhawks sixth overall. The 18-year-old has the size many teams look for in a center with his six-foot-two frame. To go along with his size, Glass can compile points, finishing the season with 94 — an improvement from his rookie season where he put together a 27-point season.

To accompany his offensive skill, he also possesses a smart two-way game which teams look for in a first line center. Here’s his scouting report (via Elite Prospects):

He attacks hard and fast and consistently displays excellent puck control. His decision making is very good, indicative of his high level of hockey sense. 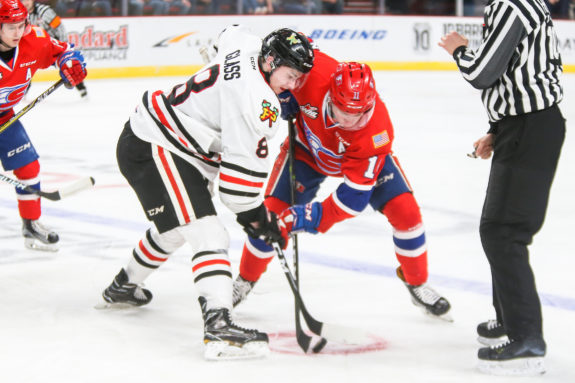 With a similar build and frame, he compares to former Winterhawk and current Nashville Predator Ryan Johansen. In his draft year, Johansen registered 69 points — if Glass can turn into what Johansen is, then Vegas has hit a home run with their first ever draft pick.

With their second first-round pick, 13th overall, Vegas selected Nick Suzuki from the Owen Sound Attack. Last season, the 18-year-old registered 96 points in 65 games, becoming one of the more underrated prospects in the draft.

Here’s the scouting report (via Elite Prospects) on Suzuki and why Vegas selected him:

A smart offensive center who thinks the game at a fast pace and makes very good decisions on a consistent basis. Though he may not be the biggest player on the ice, Suzuki plays a thick, sturdy game and is hard to knock off the puck, especially when he has his feet moving. 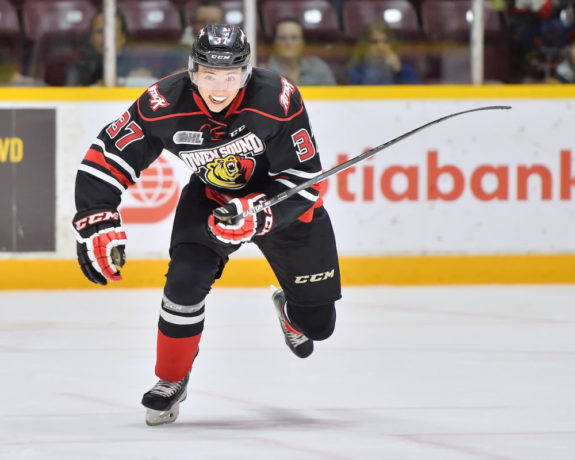 While in Washington, McPhee spent his time constructing a team that would get past the Pittsburgh Penguins. Seeing Pittsburgh built up the middle he did the same, drafting Niklas Backstrom and Evgeny Kuznetsov.

Now that he’s in Vegas, he will try and emulate their blueprint of success. With back-to-back Cups, the Penguins have shown that teams require a one-two punch at the center position to win a Stanley Cup.

Not only were Vegas’ top draft picks both centers, but they possess smart hockey sense and a two-way game. Although they value the offensive upside of Glass and Suzuki, they want their foundation to display a work ethic that will rub off on their teammates.

Nick Suzuki will be a talented piece for the Golden Knights to look forward to. (Terry Wilson / OHL Images)

Vegas wants to avoid wandering around for a decade with nothing to show. In a city that gives people other options for their entertainment dollars, they need to build a core that can win games once the novelty wears off. The foundation is set, it will take a few years before Glass and Suzuki are full-time NHLers and contributing at a high level. Vegas is gambling on the fact that both will be a tandem down the middle for years to come