Now that All-Star weekend is over, it’s time to get back to what us hockey fans do best: complain about their favorite team.

In all seriousness, this year’s Washington Capitals are a much better team compared to last year. Currently, they sit at 24-14-9 and, barring miracles from a fifth team in the Atlantic Division or anybody below them in the Metropolitan Division, should make the playoffs this year. The Caps are also a top-half puck possession team, a top-five shot suppression team and their power play once again is among the best in the league. It’s almost as if it’s been forever since Adam Oates last coached the team; who pulled the unthinkable in making a team with Alex Ovechkin and Nicklas Backstrom one of the worst possession teams in the NHL. Having an experienced man like Barry Trotz is such a breath of fresh air. Now their PDO (combined on-ice shooting and save percentage while at even strength) did increase rapidly during their 14-5-5 tear the last two months, but it is not at a level where you should be concerned for a major fallout, Toronto Maple Leafs style.

The one thing Washington will need to watch out during their even strength play is that they have performed this well while playing the weakest strength of schedule out of anyone in the Metropolitan division. That being said, if we were to calculate weighted pythagorean standings points per 82 games based on the Washington Post’s Neil Greenberg’s method, the Caps would be on pace for 98.7 points based on goal differential and 104.8 points based on score-adjusted shot attempt differential (also known as corsi for percentage). Put those two numbers in the middle and you will get a number that is near what Washington was currently on pace without taking into account of future opponents (99.4 points).

If you want to remove any skepticism of Washington’s schedule, the next month would be a great time to prove doubters wrong. Twelve of their next 15 games are against teams expected to make the playoffs; including battling Pittsburgh three times and playing Anaheim and Los Angeles twice.

While it is great to see Washington back as a potential playoff team, we have to start wondering what it will take to get them to become a Stanley Cup contender. It is pretty clear that the teams ahead of the Caps the Metropolitan Division pose a real threat to knocking them out of round one. As of now the Caps could play either two of the group consisting of the Penguins, Rangers or Islanders in the first two rounds of the playoffs. All three teams have posted strong playoff runs from recent years or currently maintain some of the best possession numbers in the NHL.

So from within, how can Washington start to hit elite status and compete with the big boys. One method of improving five-on-five play is to tinker the lineups. To do so, we need to look at all the partnerships amongst all 22 skaters Barry Trotz has used this season.

How to read a WOWY (With You-Without You) Chart 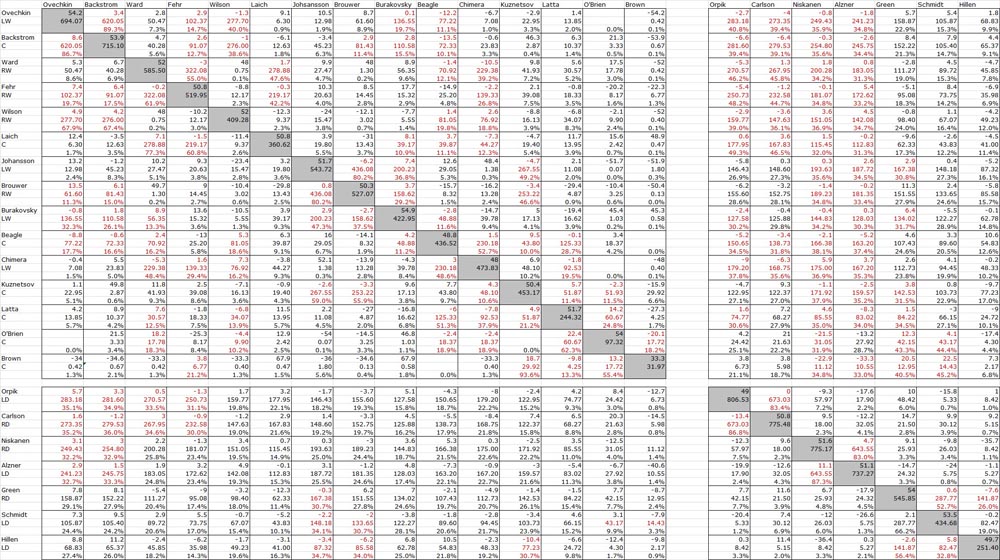 1) In this piece, we can immediately scratch off Liam O’Brien and Chris Brown for having any chance to be given a Capitals sweater come playoff time unless catastrophic injuries happen. Brown can still turn a corner, but given that he’ll be 24 in February, it will be a struggle for him to make a long-lasting impact in the NHL, let alone in Washington. O’Brien, on the other hand, was a welcome addition considering how he joined the team as an undrafted free agent invitee out of training camp. His time may come in the future.

2) Please, please, please don’t ever break up Alex Ovechkin with Nicklas Backstrom! Both players make each-other better by a sizeable difference. Specifically, Backstrom is a whopping 8.6% better playing with Ovechkin than without him.

3) That being said, Washington has been searching forever for a perfect right wing on the top line since Mike Knuble left in 2012. Troy Brouwer and Eric Fehr are much better fits with Ovechkin and Backstrom, but Andre Burakovsky is the future and the future is now. Even if you don’t believe in George Allen’s famous words, Burakovsky is the best player on the team not named Alex Ovechkin in relative corsi (on-ice unblocked shot attempts for percentage minus off-ice unblocked shot attempts for percentage). At the end of the day, you have to put your best overall players on the top line and zone starts aside, Burakovsky is up their already.

4) Tom Wilson is another one for the future, but it is quite shocking how he is such a terrible match with everybody except for Jay Beagle, Jason Chimera, Alex Ovechkin and Nicklas Backstrom. That’s not good considering that Beagle and Chimera are Washington’s two worst relative possession forwards that have played over 200 even strength minutes.

5) From here on out, this is where migraines and headaches begin. One thing that stood out in this research is how euphoric it would be to watch Marcus Johansson and Joel Ward play together. In fact, Ward himself is putting up another fantastic season, contract year aside. The same can also be applied to Eric Fehr. However, Ward has always been a checking forward while Johansson has always been deployed as a scoring forward. The characteristics just don’t match up unless you change a player’s style of play that has been mastered for decades in the span of a few months.

6) Which leads to this. Brooks Laich, Troy Brouwer and Evgeni Kuznetsov might as well be proverbial rubik’s cubes. All three can make one line-mate better while making the other one worse. That’s not great if you want anyone of these guys playing in your top six. To me, this is the group where I deem that the Caps have too much of the same player.

7) However, Brooks Laich crashes the net better than any Capital and is the team’s most trusted penalty killing forward from a time-on-ice standpoint. Also, Capitals fans are already traumatized at a former prospect dominating somewhere else, so let’s not think about trading away Kuznetsov just yet.

8) Let’s talk about Michael Latta. Latta is awesome pairing up with Ward and Laich and that has the makings of a Stanley Cup Champion fourth line if Chimera and Beagle were not on this team. But since Chimera and Beagle are on this team, Latta has to be in the press box because Kuznetsov is the only non-top line forward that fits well with him. Latta’s individual offensive production is the weakest of any of the Capital forward to be given a sweater and Trotz already has instilled such a defensive structure that not adding his solid defensive skills doesn’t put a major downgrade to the lineup.

In conclusion, I have concocted the following forward lines. When working on this, you can definitely understand the headaches that Barry Trotz goes through everyday as the Capitals bench boss. Even when using advanced stats, more than just a with you-without you chart has to be taken into account.

However, it is very clear that individually, the Capitals have a handful of forwards that probably won’t cut it come playoff time. To me, they are, at least, two middle six forwards (one being a veteran center) away from even thinking Conference finals, let alone Stanley Cup finals. I still think Latta needs to play and make an impact as a two-way center on the fourth line with Laich and Ward, but that means removing Chimera and Beagle in order to do that.

2) It’s pretty evident that the Capitals coaching staff, along with the vast majority of the NHL love pairing their d-men based on handedness (right handed player always paired with a left-handed one). The recent call-up for Cameron Schilling is proof of that philosophy considering that he is left-handed, along with Hillen and injured Cap Nate Schmidt.

3) Unless injuries occurred, Trotz has rolled out the same pairings from opening night onwards. When the pairings were altered, there were some interesting results.

4) Alzner only plays well when partnered with Niskanen and no other right-handed defenseman.

5) Brooks Orpik plays better when partnered with John Carlson, but the same cannot be said for Carlson with Orpik. Now even if Carlson has played well with Schmidt this season, Carlson has never been given sheltered minutes for an entire season in his NHL career while Schmidt has never dealt with tough assignments before.

6) Meanwhile, Mike Green has started less than 52% of his shifts on the offensive zone in two of his last eight NHL seasons. For Brooks Orpik, he has been given those assignments for all but one of his last eight seasons. Clearly, it could be much better said than done to believe that the Orpik-Green and Carlson-Schmidt partnerships will work.

7) But what if Trotz decided to follow Anaheim’s model of using their defenseman? What if all six defenseman ended being deployed with nearly identical zone starts and the quality of competition would take care of itself? It is certainly something to think, especially when Orpik begins to age in hockey years but can’t be removed from the lineup because of his huge contract.

So there you have it. A grueling but interesting way of figuring out who and how Washington can implement it’s best team. Today we learned that one chart can’t determine all the answers. Overall trust in key players matter. Basic lineup construction matters. Most importantly, core analytical numbers like zone start percentage and relative puck possession matter. If you feel like you have a better lineup than me, don’t be a afraid to share it and present your case.