The Winnipeg Jets bandwagon hasn’t exactly been overcrowded through their playoff-less seasons. At this rate, it will start filling up in a real hurry.

The Jets are playing fast, physical, entertaining hockey right now. Even without two of their top four defensemen, they’ve been dominant at times over their most recent series, a tour of the Central Division’s best in St. Louis and Nashville.

The offense flows like wine from the Jets forward group, with two top scoring lines acting as sommeliers and the bottom six apprenticing nicely under them. Their goaltending has been stellar, and even devoid of Dustin Byfuglien and Toby Enstrom the defense has been strong.

If physicality is your thing, you’ll be an instant Jets fan. Their forwards and defense alike are well-versed at using their shoulders as well as their hands, and their games invariably feature several big hits.

In short, if you’ve just joined the NHL as a fan or are looking for a bandwagon to hop on (no judgment here) the Winnipeg Jets have what you’re looking for. One of the NHL’s most exciting teams has also been among its most successful so far.

It’s difficult to know where to start with the Jets, who are perhaps the most fun team to watch in the NHL right now. Which player makes the Jets the must-watch squad right now? It’s near impossible to pick just one.

Nonetheless, allow me to walk you through the NHL’s worst kept secret and introduce you to your new favorite NHL team, and that of many others I don’t doubt. I give to you, the Winnipeg Jets.

Jets Loaded With Snipers and Skill

As mentioned above, it’s difficult to settle on just one player to single out on the current Jets roster. When a team is on pace to shatter previous franchise bests, you can’t let it all fall at the feet of one player.

The simplest place to start would be with the Jets captain and leading scorer Blake Wheeler. His two-point night against Nashville on Dec. 19 moved him to 41 points in just 35 games. Translate that over an 82-game season and you’re looking at a 96-point season. Trust me, I did the math (disclaimer: a calculator did the math, I was just holding it).

Wheeler is all a captain should be. He flies up and down the ice, is a passing wizard, and is completely unafraid of the less-glamorous aspects of the game, be it shot-blocking or hitting. In the win over Nashville, he twice threw himself in front of P.K. Subban one-timers to preserve the Jets’ lead before sealing the game with an empty-netter.

Not far behind Wheeler on the scoring chart is arguably the face of the team, its first-ever draft pick, Mark Scheifele. Scheifele has a youthful enthusiasm off the ice and a zest for the game that endears him to fans, but on the ice, he’s a sniper and a grade-A puck cycler in the offensive zone.

Scheifele’s deadly shot and willingness to go to the net have potted him 15 goals so far this year. That puts him easily on pace for another 30-goal season, but he’s not the leading goal scorer on the team.

That honor is shared, as of this writing, by ultra-skilled young wingers and close off-ice friends Patrik Laine and Nikolaj Ehlers with 17 apiece. Different styles of players, to be sure, but the results have been the same in terms of goal totals.

Ehlers dashes up and down the ice at blazing speeds, stickhandles in a phone booth, and draws more penalties than almost any other NHLer. And unless you’re brand new to hockey, you already know how Laine gets most of his goals. 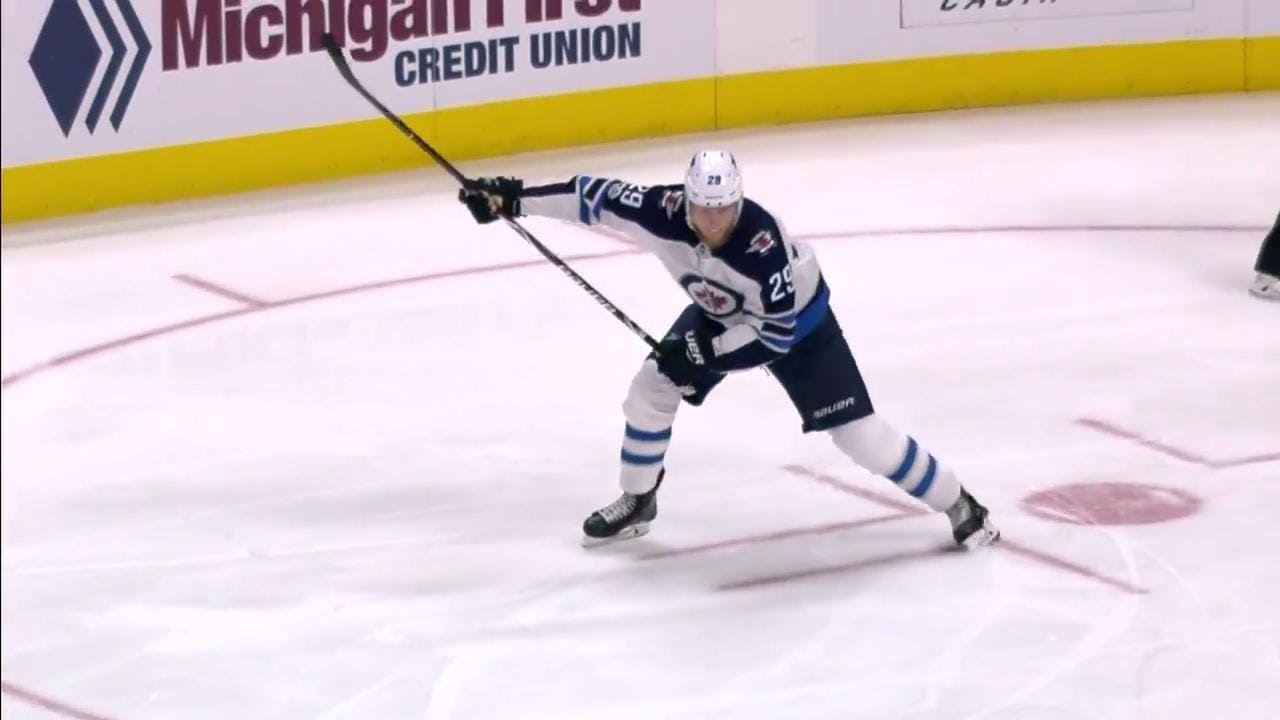 Laine is so exciting you can quite literally hear the intake of breath at Bell MTS Place in Winnipeg any time he winds up. Jets fans are just warming up to cheer every time it looks like the Finnish phenom might shoot.

This cadre of snipers is supplemented by players like the speedy, hard-working Kyle Connor, the dependable Bryan Little, and the whip-smart Mathieu Perreault. It’s a forward core to satiate any fan who appreciates up-tempo hockey.

Feeding these forwards the puck is a cast of defenders slowly coming into its own with budding young stars Josh Morrissey and Jacob Trouba leading the charge on both sides of the puck. And when he gets back healthy there are few players in the game more entertaining than Dustin Byfuglien.

Not every fan immediately gravitates toward the high-scoring forwards or bruising defensemen when picking players to cheer for. Some people want to get behind a number one goalie. If that’s you, the Jets have your man in Connor Hellebuyck.

For possibly the first time in their entire franchise history, the Jets have a true number-one in Hellebuyck. He’s started off 18-4-4 with a 2.50 GAA and a .918 save percentage to be among the NHL’s best. He’s top-ten in the NHL in both wins and GAA.

Sure, Hellebuyck’s cooled off a bit lately, but that’s the beauty of the lineup the Jets have assembled: the rest of the team has heated up. In the early going it was Hellebuyck rescuing his teammates when they were playing with little confidence. Now they’re giving him the space to make mistakes by piling up the goals.

So what more could you ask for in a favorite team? Exciting hockey at every position and a team geared towards putting as many pucks in the net as possible have made hockey as fun in Winnipeg as it’s ever been.

Fans looking for a new team to adopt should get in on that fun. The Jets have given their fans plenty to cheer about this year, and look to have their best ahead of them.