It’s no secret that the Winnipeg Jets have one of the best prospect pools in the NHL. Since The Hockey News predicted the Jets would be the 2019 Stanley Cup champions, they have added Patrik Laine and Logan Stanley in the draft, plus picked up Marko Dano in a trade with the Chicago Blackhawks.

The 2016-17 season didn’t go the way the Jets would have liked it to, but you can chalk a lot of that up to inexperience. The team had Laine, Connor Hellebuyck, Nic Petan and Josh Morrissey playing their first full seasons in the NHL, while Kyle Connor got a long look at the beginning of the season.

Today, though, we’re going to take a look at the rest of the talent that’s still waiting to arrive at the NHL level. We’ll be using the Hockey’s Future prospect criteria, where a player is considered a prospect if he has played in fewer than 65 NHL games as a skater or fewer than 45 NHL games as a goaltender before his 24th birthday.

Jack Roslovic and Connor are the biggest names left in the Jets’ forward prospect pool, and they each had a good season. Connor got his chance with the Jets, playing 20 games before finding himself with the Manitoba Moose. He went to work quickly, putting up a respectable 25 goals in just 52 games and finishing second on the Moose in points. 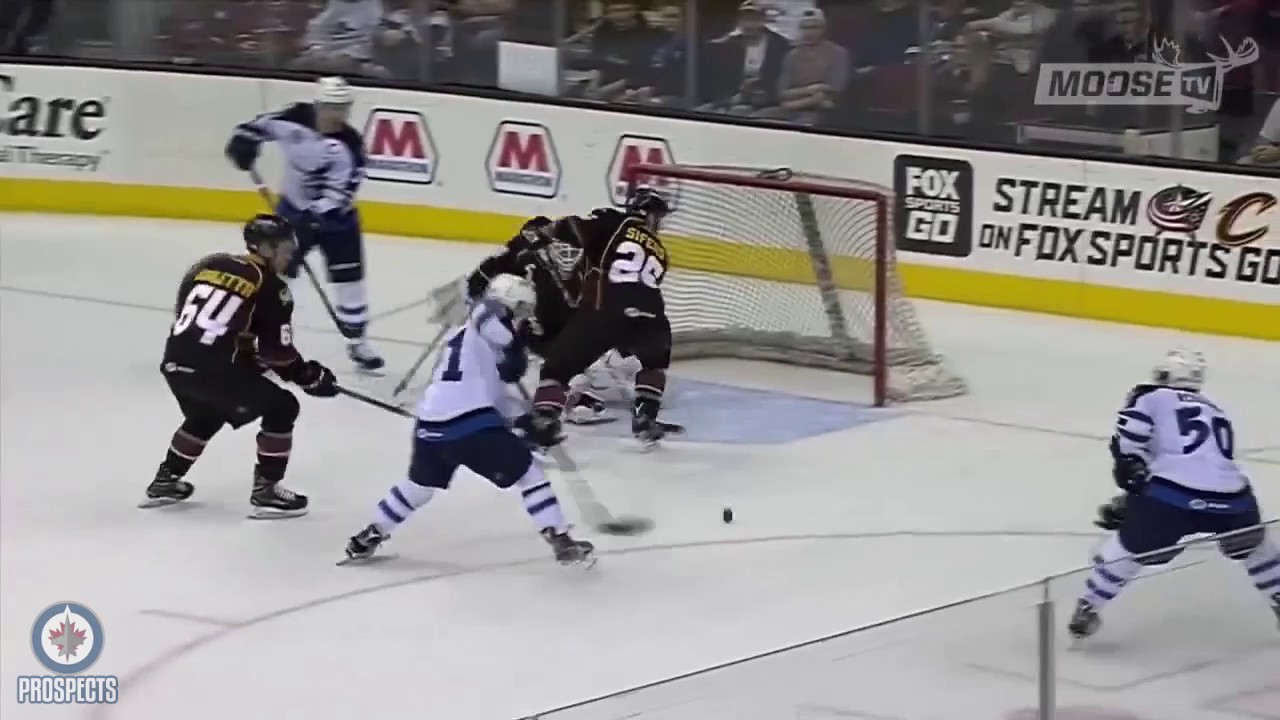 The player he finished behind was fellow first-round draft pick Roslovic, who had a solid first season as a pro as well. Fans should see Roslovic and Connor on the Jets’ lineup more permanently starting next season.

We should also continue to watch Jansen Harkin and Michael Spacek, who spent the year with their respective teams in the WHL. Both ended the season as point-per-game-plus players, with Spacek putting up another 12 points in just seven playoff games.

One thing the forward group is lacking is size. None of the players are much taller than six feet, while Brendan Lemieux is the heaviest at 210 pounds. The Jets have some size up front with Blake Wheeler, Adam Lowry, and Laine, but in the Western Conference, they could probably use another bigger guy with some hands.

Morrisey graduated to the NHL level this past year, but the Jets still have a few more defensive prospects waiting for their chance.

Tucker Poolman has signed an entry-level contract with the Jets, and all indications are that he will get a chance to play with the club in 2017-18. Poolman brings more size to an already massive blue line but is a right-handed shot, which the Jets have enough of with Jacob Trouba, Dustin Byfuglien, and Tyler Myers.

Seventh-round-pick Sami Niku, however, could be a sleeper to push his way onto the Jets roster. Niku has steadily been improving his stock playing against adults in Finland. He’s also a left-handed shot, which the Jets desperately need.

Another left-handed shot is last year’s 18th overall pick, Logan Stanley. Stanley has a huge advantage over any other defender here because of his sheer size. He is a teenager in an adult body. At a towering 6-foot-7 and 228 pounds, he would dwarf everyone except Myers. The Jets traded up to get him, so they will be looking to get him in the lineup sooner than later. Expect to see him in at least a couple of games next year.

Logan Stanley was a great and underrated pick for the Jets.

The Jets are banking their future on Hellebuyck and Eric Comrie. Hellebuyck struggled in his first full season, but he is still quite young and has many years ahead of him.

While Hellebuyck slugged it out in the NHL, Comrie took over as the starter for the Moose along with Ondrej Pavelec. While the Moose struggled all season long, Comrie ended with fairly respectable numbers, keeping his goals-against-average under 3.00 while stopping 90.6 percent of the shots he faced. He also played the third-most games in the league.

The prospect pool still has a couple of talented players, along with a few players that you shouldn’t count out. The forward group is deep and skilled, while there is some size on the back end. The bulk of the Jets’ best prospects have already become full-time NHLers.

Kevin Cheveldayoff has done a great job drafting in his tenure as general manager. It will be interesting to see what he does this year with the pieces he has, and whether he can take advantage of his prospects to pull in the reinforcements this team needs to make the playoffs.