On Saturday, April 18th, 2015, the hockey world (except Oilers fans) collectively cringed as the outcome of the 2015 NHL Lottery Draft fell in favor of the Edmonton Oilers, providing them the exclusive opportunity to once again draft first overall.

Although there was little debate, the Oilers subsequently selected Connor McDavid with the first overall pick, securing a franchise center ice-man in the making. However, as all have become painfully aware, adding McDavid was simply the most recent first overall selection in Oilers history, joining Taylor Hall from 2010, Ryan Nugent-Hopkins in 2011 and Nail Yakupov from 2012.

Having enjoyed four first overall selections within a five-year period from 2010-15, the Oilers have been egregiously spoiled with high draft picks, yet as the NHL and its fans have become well-aware, have thus far failed to use these selections to generate on-ice success. As a result, as of the 2015-16 All-Star break, the Oilers once again found themselves in a similar situation as in years passed, tied for dead last in the NHL with a mere 43 points in 50 games played.

As such, the Oilers at the break retained a 13.5% chance of once again winning the Draft Lottery, with Columbus the sole team ‘ahead’ of Edmonton at 20%.

This begs the question: if the Oilers fail to improve come the end of the season, and once again defy the odds to capture the first overall pick, would they keep the pick, or, monumentally, trade it?

“With the First Overall Selection…” 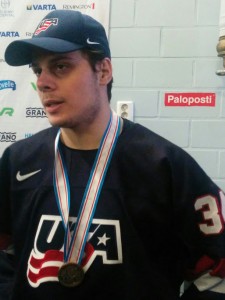 Auston Mattews is heavily favored to be selected first overall in 2016.  (J.DeLuca/THW).

Despite numerous high value draft selections, the Edmonton Oilers have failed to substantially improve in the standings in recent years. Although the team has taken steps in the right direction on the ice, largely due to changes made by Peter Chiarelli and the Oilers new management regime, a large amount of work remains to be done before Edmonton can realistically challenge for a playoff spot.

In the coming 2016 NHL Draft, Auston Matthews appears to be a lock to be selected first overall. Simply too talented to fall past first overall, similar to McDavid and Ekblad in recent years, if the Oilers were able to capture the first overall selection, there would be no desire to select Matthews with the pick, and I’ll tell you why.

It boils down to one reason: Matthews is a center ice-man.

Believe it or not, center-ice is a position of strength for the Oilers, who currently retain McDavid and Nugent-Hopkins (when healthy) as well as Leon Draisaitl, who is also a natural center. Given time to adequately develop, the Oilers could certainly retain one of the most highly skilled sets of centers in the entire League, featuring a unique combination of speed, size and skill.

As a result, the Oilers would have no true need for Matthews.

And if, given they retained the first overall pick, the Oilers did not select Matthews, there would be no way Edmonton would select either Patrik Laine or Jesse Puljujarvi first overall, especially so considering the one player they infinitely need is projected to be selected in the fourth to sixth overall range. 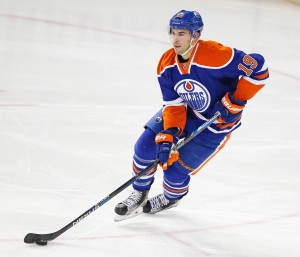 The Oilers defense has long been an area of concern. (Perry Nelson-USA TODAY Sports)

Trading the first overall draft selection in the 2016 NHL Draft would be a monumental feat. Not only would rival teams be furious the Oilers attained the pick to begin, but they would be even more irate if they were to trade it.

However, if the Oilers happened to find themselves in this situation, trading the pick would be the right decision.

For years, the Oilers’ main, if not glaring, deficiencies have been on the blue-line and in goal. Since Chris Pronger left town, Edmonton has been searching for a true, number-one defenseman. They have tried everything, ranging from the draft and trades to free agency, yet no fix has been the accurate solution.

In goal, the Oilers have bounced back and forth between fringe starters and goalies who, in reality, should have been playing in the American Hockey League. Recently, Edmonton inked Cam Talbot to a three-year contract extension, making him the Oilers’ somewhat-official starting goaltender for the coming years. However, Talbot will be roughly 32 years-old by the time his contract expires, meaning he likely won’t be the definitive starter by the time the Oilers are truly competitive.

Trading the first overall pick would give the Oilers an incredible asset to improve either, or possibly both of these areas of need. Dealing the selection would be a risk, however, the Oilers drastically need to improve the quality of players surrounding their young core, rather than add another young, undeveloped star to it.

If the Oilers were able to land a top-2 defender in the deal, alongside others assets, it would truly be worthwhile. 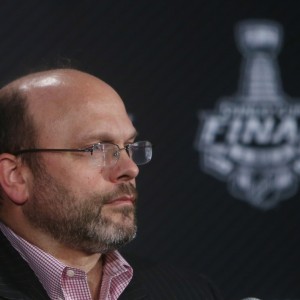 However, in another scenario, the Oilers could trade down in the draft. Any team would undoubtedly be willing to listen to a potential offer, especially if the certainty of selecting Matthews suddenly became available. Acquiring the fourth or fifth selection, on top of other assets, would allow the Oilers to draft Jakob Chychrun, the top-rated defenseman available in the draft.

Suddenly, the Oilers could make immense upgrades to their areas of true need, rather than simply select the best player available in the draft.

Peter Chiarelli is an incredibly smart General Manager, as seen by his success in Boston, meaning he surely understands that team depth is essential to positive on-ice results.

Although it would be an incredible display, for now making such a monumental moves remains, unfortunately, entirely hypothetical. However, one fact remains: the Oilers, despite numerous draft selections, are once again failing to improve. Making a drastic move, such as the one detailed here, could in fact be the final step for the Oilers in once again finding the pathway to relevance.