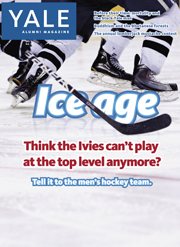 If you have the chance to borrow a copy of the May / June 2011 issue of the Yale Alumni Magazine, be sure take advantage of it (or at least check out the link here).  The cover says it all:  “Ice Age – Think the Ivies can’t play at the top level anymore? Tell it to the men’s hockey team.”

Yale Alumnus Michael Obernauer, a sportswriter for the New York Daily News, wrote an article on this year’s team and it’s rise through the NCAA Regional tournament (the Bulldogs were stopped short of the Frozen Four by a loss to Minnesota-Duluth).

The article focused on how the Yale program has evolved under head coach Keith Allain (Yale alumnus and former St. Louis Blues goaltending coach).  These seniors are the first set of recruits Allain has seen from start to finish at Yale.  Each year, his teams keep getting better and better.  In addition to his impressions of Allain’s coaching, Obernauer’s descriptions of the players, and how they played as a team, made the reader feel the excitement of the past season at Yale.  It also gave readers the understanding that, as Jimmy Martin’s t-shirt succinctly explained, there is still “Unfinished Business” in the Yale hockey program.

Martin began sporting the “Unfinished Business” t-shirt at the beginning of the 2010-11 season.  Still feeling the previous year’s season-ending loss against Boston College, he and his teammates wore the t-shirts to remind them what it was going to take to get past it.  It became their rallying cry.

Obernauer also provided a timeline that traced 115 years of Yale hockey, from its inception through their recent tournament loss to Minnesota-Duluth.  For those who were unaware of the school’s history on the ice, the Bulldogs played their first hockey game in 1896.  It was a 3-2 loss against the Baltimore Athletic Club.  The next day Yale played the “first-ever American intercollegiate hockey game” against Johns Hopkins, which resulted in a 2-2 tie.

Other historic facts Obernauer added to his timeline included:

In addition to the Bulldogs’ first number one-ranked season in 2010-11 and the upcoming 2011-12 team’s “Unfinished Business,” former NHLer and Yale alumnus Bob Brooke* contributed another reminder for those who wonder about the future for Yale hockey: “Who says outstanding athletics and outstanding academics can’t go hand in hand?”

A question we should be asking of all universities…