When the Edmonton Oilers open training camp this fall most of the eyes will be on the veterans and cache prospects like Connor McDavid, Darnell Nurse, Leon Draisaitl and even Griffin Reinhart who are legitimate threats to make the main club on opening night. The list of prospects however extents beyond the four high caliber prospects.

There is more to the prospect pool than what we can refer to as the big four this year. Credit should be given where credit is due, as much as former head scout Stu MacGregor is maligned for some ill advised selections in the past two drafts, he along with the scouting department have rounded out a decent prospects pool for new head scout Bob Green to build upon.

Green was the former general manager of the WHL Edmonton Oil Kings and had a tremendous track record culminating in a 2014 Mastercard Memorial Cup championship. He’ll have to use the same skill set and hope it translates to his new role with the Oilers and develop a base for a Stanley Cup championship the Oilers fan base hasn’t seen since 1990 (that’s over 25 years ago for those of you at home keeping score).

Oilers prospects give rave reviews to orientation camp in the team’s own building: http://t.co/IySIex08Nv #yeg pic.twitter.com/ynWa6sxApY

Left off the list below is budding power-forward Jujhar Khaira who will be a huge piece down in the AHL, who as fellow THW contributor Carl Maloney put it:

A budding power forward with touch around the net, his progress as a pro has been slow to develop, but still has the combination of size and skill that makes him a prospect of note. – Carl Maloney, THW Contributor

That being said this is NOT a top 10 prospects list here but ten Oilers prospects to watch this season:

Betker turns pro this season and the shut-down left-shot defender out of the Silvertips system is looking to make his mark. The knock on Betker was that he is a one-dimensional defender with limited offensive ability. He had a good showing at prospects camp and looks to contend for a final spot on the Condors back end. Worst case scenario is that Betker turns a crowded blue line situation into an opportunity to further his career with top-four minutes in the ECHL.

Keep this name in your minds as a prospect that was a late-round pick that could turn into quite the complimentary piece down the road to what could become a very deep Oilers defense.

Prospect-wise Brossoit is the closest thing the Oilers have to developing a starting goalie and the one  game he played last season he knocked it out of the park with a 49 save performance 3-1 L against the San Jose Sharks on April 9th. He was a starter for the majority of last season in the ECHL and had some hiccups adjusting to the AHL game last season.

Entering his sophomore season as a pro Brossoit looks to split the goaltending duties in the AHL this season with Eetu Laurikainen. Depending on what happens with the Oilers current three-headed situation with the main club having Cam Talbot, Ben Scrivens and  Anders Nilsson, Brossoit will be a first call-up to the main roster this season and play spot duty.

Off-ice issues between Chase and the Hitmen put a cloud over the start of his season last year but really took off averaging close to a point-per-game with the Royals. He even got into four playoff games at the end of the year with the OKC Barons. Now officially entering his rookie pro season Chase will get a valuable support role in the AHL this season on what looks to be a strong Condors team upfront.

A late round gem who excelled in the prospects game playing alongside McDavid, Chase could turn into a helluva asset for the Oilers if his junior career can transition to the pro game. He might not be a call-up this season, or if he is he’s in the middle of the pack, a strong AHL season can rocket him up the organizational depth chart.

This is a pivotal year for Gernat who enters his third pro season and has yet to establish himself. After a stellar junior career he looked to be a big-bodied offensive defenseman who could anchor a powerplay unit. Unfortunately it hasn’t quite come together for the Slovakian defender just yet.

He’s slipped down the organizational depth chart and some of the crowding on the defense at the AHL level will be a challenge he’ll have to overcome, but there’s nothing saying he can’t put it together this season and re-emerge a decent prospect for the Oilers.

If not he could become trade bait for another prospect for prospect trade where it just isn’t working out in their current organizations.

It’s surprising to most when you look at the numbers how and why Laurikainen went undrafted after posting some decent numbers as a starter with the WHL Swift Current Broncos. He returned home to play for the Blues and once again had decent numbers for a starter, enough of a resume for the Oilers to sign him to a two-year ELC.

It’ll be his first pro season in North America and he’ll work in a duo with Brossoit as per the current plan it seems. Don’t expect an overly flashy performance but he has a higher upside than the most recent goalie prospects from Finland that have came and gone through the system in Samu Perhonen and Frans Tuohimaa.

Oesterle spent three years playing NCAA before he was signed to a two-year ELC that began last season. He was a pleasant and welcomed surprise for the organization at the AHL level and even got into six games with the main club.

He’ll likely play top-four minutes in the AHL to start the year and fans should expect him to come up for a few games in Edmonton throughout the season. A puck-moving defenseman that makes limited mistakes and plays a responsible game is hard to find. The Oilers have just that in Oesterle.

Platzer like many on this list is playing his rookie pro season and can play all three forward positions if needed. He’s a smaller stature point-producer with a motor that doesn’t quit, he’s quite useful getting to lose pucks and grinding it out.

The knock on the Oilers forward corp as a whole is that they’re too small and not gritty enough because they are cookie-cutter.

He might start the year buried in the AHL depth chart on what, once again, looks to be a deep forward unit. Expect Platzer to be a player similar to Chase who can rocket up the depth chart and fill some organizational needs all in due time.

The son of former-Oiler Craig Simpson is ready to turn pro this fall after completing a stellar career with UND as the linchpin on their defense. A technically sound defender who isn’t overly flashy, Simpson rarely ever stands out in a game and that’s a good thing. For the most part he’s making the safe play.

The logjam on the AHL defense could mean that Simpson possibly ends up playing top-pairing minutes in the ECHL so he can learn the pro game slowly. He’s a long-term projection defenseman who is your everyday steady-eddy, who from the rare time-to-time will become YouTube famous and log 22 million search results for “Dillon Simpson Shot Block”.

He likely won’t see any time with the big club this year but could be a force in the AHL as he gets more comfortable. 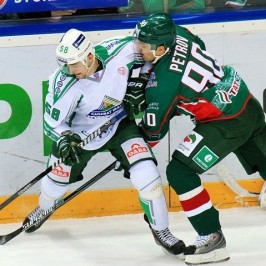 It took some time for the Oilers to put the leg work in to get him to finally come over to North America and because of that comes some deserved hype. He’s coming off an impressive year after two years playing a smaller role for Salavat Yulaev Ufa. He was a former captain for Russia at the World Juniors in 2014 and comes with high-end skating ability and now that he’s come over and is willing to make a go of it over here, he’s now one of the fastest skaters in the organization.

Slepyshev is tremendously skilled offensively but like many young offensive prospects, he needs to grow his defensive game so expect him to get an offensive role with powerplay minutes in the AHL this season.

He could get a game or two with the big club.

Yakimov enters his sophomore season and will likely be a top-six forward for the Condors in the AHL this coming season. He’s that big bodied center the organization has been missing since the days of Jason Arnott in the mid-1990’s. That’s not to say he’s going to be the next Arnott, he’s a comparable game style wise.

The hope is that after taking a year to adjust to North America Yakimov will take another step forward and build upon a 28-point performance in 57-games. If he builds upon last season he has a legit shot at making the NHL roster two seasons from now. That said he is currently behind a three-headed monster in Ryan Nugent-Hopkins, McDavid and Draisaitl, meaning unless someone shifts to the wing (likely Draisaitl), he’s destined to be capped in a fourth-line center  role with the big club eventually.