You can find the rest of the series here: Part 2 Part 3

The Boston Bruins arrived at the 2007 NHL Entry Draft in possession of a top ten draft pick, which carried the highest of expectations.  Instead of acquiring a building block for the future of the organization, the Bruins began a three year span that would feature countless swing-and-miss draft picks.  The team’s success on the ice has masked these poor drafts pretty well, thanks in large part to previous draft classes and positive trades.  The team has made adjustments to improve upon their poor showings at the draft, but fans cannot help but wonder how strong the organization would be if it weren’t for all of these unsuccessful draft picks.  Among these three draft classes, the 2007 draft class stands out as the worst of the bunch.  Of the six players selected by the Bruins in this draft, only one remains in the organization.  So what happened to the rest? 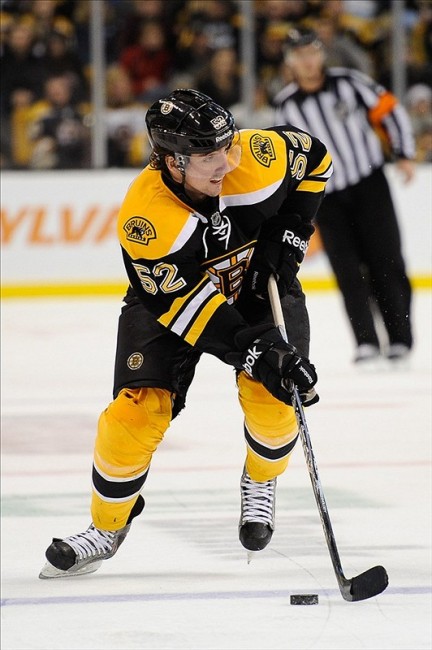 With their first pick, the Bruins selected Zach Hamill of the Everett Silvertips of the WHL.  In his draft year, Hamill tallied 93 points, making him the top scorer in the league.  Hamill did not possess elite size or speed, but he had displayed elite offensive tools in juniors, so the Bruins rolled the dice.  After being drafted, Hamill returned to Everett before making his AHL debut in the spring of 2008.  His first season in Providence was an adjustment, but in the 2009-2010 campaign, Hamill appeared to turn the corner.  Unfortunately for the organization, that season would be the peak of Hamill’s professional career.  The next season saw his points per game production drop, a trend that would continue for the duration of his time in the organization.  In the summer of 2012, Hamill was traded to the Washington Capitals in exchange for left winger Chris Bourque.  Bourque’s tenure in Boston was short lived and unsuccessful, leaving the Bruins with nothing to show for their top ten draft pick.  Hamill was traded to Florida during the 2012-2013 season, finishing out the year in their organization.  As a free agent, Hamill signed a two-way deal with the Vancouver Canucks.  He will likely spend this season in the AHL with the Utica Comets, with a very slim chance of seeing NHL ice time.

In the second round, the Bruins traded up a handful of spots and selected defenseman Tommy Cross, a Boston College commit.  A Connecticut native, Cross represented more of a long-term project.  Prior to the draft, he had suffered a knee injury, which was cause for concern, but the Bruins still viewed him as a candidate to develop into an NHL defenseman and nabbed him early in the second round.  That knee injury would not be the last of Cross’ amateur career, and his development was significantly hampered over the years because of his inability to stay healthy.  Last season marked his first season in professional hockey, splitting time between the AHL and the ECHL.  Six seasons after his draft year, the organization had expected Cross to be further along in his development, but his adjustment to the pros saw him struggle before being demoted to the ECHL.  The good news for Tommy Cross is that he is only member of his draft class that is still with the Boston Bruins, and his shot at one day making the Bruins has not passed him by, at least not yet.

Having traded their third and fourth round draft picks (separate deals), the Bruins next pick wasn’t until the fifth round, where they selected German defenseman Denis Reul.  Reul presented a good combo of size and physicality, though his skating was a bit of a concern.  After being drafted, Reul spent two seasons in the QMJHL for the Lewiston MAINEiacs.  He posted decent numbers over those two seasons and earned himself an amateur tryout with the Providence Bruins.  Reul’s performance was not impressive enough to elicit a contract offer from the Bruins organization and he was forced to part ways with the organization.  Rather than pursuing a hockey career in North America, Reul returned to Germany in 2009. After a brief stint with his former team, Heilbronner Falken, Reul caught on with Adler Mannheim of the DEL. He is still playing for Adler Mannheim today, helping them finish first in the DEL last season.

The Bruins went defense again with their first pick in the sixth round, taking defenseman Alain Goulet from the Aurora Tigers of the Ontario Provincial Junior Hockey League (now known as the OJHL). He possessed good size and flashed offensive potential in the OJHL, but, like most sixth round picks, was more of a project pick. After being drafted, Goulet played a season and a half with the University of Nebraska-Omaha before heading to the QMJHL.  Although he posted decent numbers in college, his offensive production skyrocketed when he joined the Gatineau Olympiques in 2009.  He posted better than a point per game in the regular season, slipping down to an impressive point per game in the playoffs.  This performance earned him a spot on the Providence Bruins.  He spent a year and a half in Providence before being sent down to the Reading Royals of the ECHL in 2011.  For the last two seasons, Goulet has bounced around the ECHL, playing with four different clubs, the most recent of which was the Orlando Solar Bears.  When this season ended, he signed a contract with Saryarka Karagandy of the Higher Hockey League in Kazakhstan.  At this point, it is a safe bet that Goulet will never make it to the NHL.

The Bruins acquired this selection from the Colorado Avalanche for a 2008 sixth round pick.  They went back to the well with this pick and drafted another defenseman, this time it was Radim Ostrcil from the Czech Republic.  Prior to the draft, he had played for HC Vsetin of the Czech Second National Hockey League.  He had played so well for their U-20 team that he earned himself playing time in the Czech Extraliga.  Although he did not produce big number in the Czech Extraliga, the fact that he was able to hold his own in a superior league was an accomplishment in itself.  After being selected by the Bruins, he joined the Ottawa 67’s of the OHL.  The offensive defenseman did not live up to expectations, posting a mere 13 points for the season, while struggling to an ugly +/- -21.  He spent just one season in North America before returning to the Czech Republic to continue his hockey career at home.  Despite showing a bit of promise prior to his draft year, Ostrcil has played less than 10 games in the Czech Extraliga over the last four seasons.  He spent time with two different clubs in the Second National Hockey League, SK Horacka Slavia Trebic and HC Havlickuv Brod.  Even at a lower level of competition, Ostrcil’s game never took off.  He signed with MsHK Zilina of the Slovak Extraliga.  It is a near certainty that Ostrcil will return to North America, let alone make it to the NHL.

With their final selection in the 2007 draft, the Bruins chose Jordan Knackstedt from the Moose Jaw Warriors.  In his draft season, a midseason trade to Moose Jaw kick-started his offense, helping to get his name called on the second day of the draft.  He took a big step forward following the draft, putting up career numbers in his first full season with the Warriors.  With his 31 goal outburst, he earned himself a spot with the Providence Bruins.  Through two plus seasons with the Baby B’s, he netted 31 goals and 76 points, while contributing valuable minutes to Providence.  In 2010, the Bruins traded Knackstedt, along with Jeff LoVecchio, to the Florida Panthers for AHL defenseman Sean Zimmerman and a conditional seventh round pick in the 2011 NHL Entry Draft.  This deal was more about clearing contracts than it was about actual player value, making Knackstedt a victim of a roster crunch.  For the last two seasons, Knackstedt has bounced between various teams in both Italy and Sweden, averaging just under a point per game over that span.  This summer, he signed a deal with the Bakersfield Condors, the ECHL affiliate of the Edmonton Oilers.  Knackstedt is unlikely to make it to the NHL, but as one of only three players in this Bruins draft class still playing in North America, the possibility still exists.

Looking back on this draft, it is easy to see why it is widely viewed as one of the worst in recent memory.  Unfortunately for the Bruins, their lack of success in the draft wouldn’t end here.  Be sure to keep an eye out for parts 2 and 3 of this series, where the focus will shift to the 2008 and 2009 draft classes.

You can find the rest of the series here: Part 2 Part 3

Who’s Never Picked #1 in the Draft

Bruins’ Bergeron a Lock for Hockey Hall of Fame

Coyotes: Looking Ahead to the 2021 Expansion Draft

Ones That Got Away: The Winnipeg Jets’ Dave Babych