Hindsight is always helpful, often enlightening, and sometimes humorous too.

In the build-up to my seventh annual NHL mock draft — to be published the morning after the Stanley Cup is handed out in June — I’ve decided to revisit my results over the last six years and provide five takeaways from each of those drafts.

I will highlight my steals and misses, the good and the bad — even the ugly. It should be a fun trip down memory lane for better or worse. There will be humbling reflections and perhaps some boasting too.

I started by mocking only the first round in 2012, then expanded to two rounds for 2013, before returning to one round in 2014 when I did two versions — one with potential trades and one without.

For THW, I mocked three rounds for 2015 and then attempted all seven rounds for 2016 and 2017, which will be the case again this year as I try to predict all 217 picks while providing at least 100 honourable mentions.

That’s something to look forward to, but let’s flash back to 2013.

(Amy Irvin / The Hockey Writers)
Nathan MacKinnon was the consensus No. 1 pick in 2013 and he lived up to that billing by lighting it up for the Colorado Avalanche in becoming a Hart Trophy finalist this season.

This was one of my better years in terms of being bang-on with five of my first-round predictions: MacKinnon at No. 1, Drouin at No. 3, Horvat at No. 9, McCarron at No. 25 and Klimchuk at No. 28.

That’s impressive, though it should be noted that the pick used on Horvat was traded on the draft floor when the Canucks sent Cory Schneider to the Devils straight up for ninth overall. That deal has worked out well for both teams and I’m still taking credit for getting that one right. 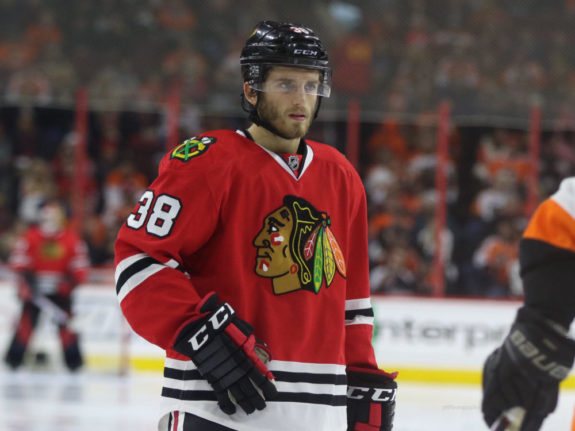 (Amy Irvin / The Hockey Writers)
Ryan Hartman snuck into the first round in 2013 and has since fetched a first-round pick for the Chicago Blackhawks in getting traded to the rival Nashville Predators at the 2018 deadline.

I’ve never been perfect, but in 2014 I only had four misses with Fucale, Zykov, Hagg and Santini falling out of the first round in favour of Poirier, Dano, Dickinson and Hartman.

Goalies take longer to develop, but it’s probably safe to label Fucale a bust at this point. Poirier is entering that territory as well. For the record, Fucale went at No. 36 to Montreal but remains quite far down the Canadiens’ depth chart.

The other six are still working to establish themselves as NHL regulars, but all of them have got at least a cup of coffee to date over the last five years.

Hagg, who went to Philadelphia at No. 41, and Santini, to New Jersey at No. 42, have 71 and 75 NHL regular-season games on their respective resumes. 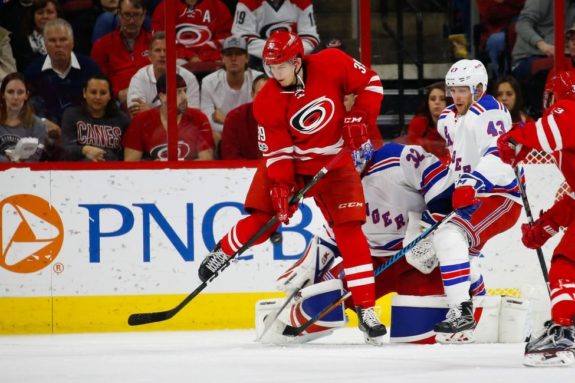 (James Guillory-USA TODAY Sports)
Carolina Hurricanes forward Valentin Zykov, seen here screening the New York Rangers goaltender, has discovered his scoring touch and could still prove to be a steal in the second round.

Zykov, selected at No. 37 by Los Angeles and later traded to Carolina, has only played 12 games but has produced eight points, including four goals. He had a breakout year in the AHL, leading the league with 33 goals in just 63 games prior to his call-up. Keep an eye on him for next season with the Hurricanes. 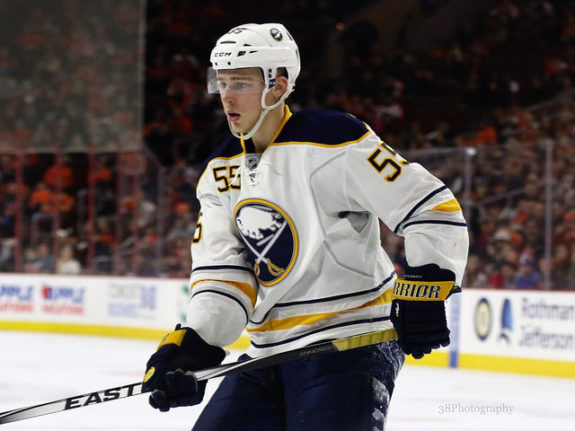 (Amy Irvin / The Hockey Writers)
Rasmus Ristolainen was my only miss inside the top 10 in 2013.

I was on a roll in the top 10, getting nine of the names right and coming close on the order too. My lone mistake was Shinkaruk (10 to 24) over Ristolainen (15 to 8) — a glaring one on both fronts when looking back.

As you can see, I was 7-for-7 on the names from the outset, which deserves a pat on the back or at least a stick tap.

In a lot of cases throughout the top 30, my predictions were off by just a spot or two — see Domi and Mantha as two examples. I was dialed in for the most part and I can certainly feel more pride than shame.

Give me an A for effort. 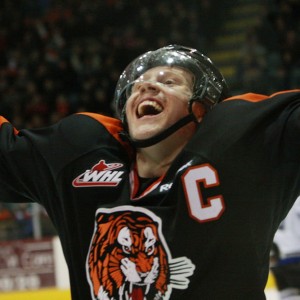 (whl.ca)
Hunter Shinkaruk was a dynamic scorer in junior for the WHL’s Medicine Hat Tigers, but he hasn’t panned out as a pro and can probably be considered a bust at this point in his career.

Some teams would have been better off going with my suggestions. This one is debatable because Barkov has been so good for Florida and still has upside, but the Panthers probably shouldn’t have passed on a future Norris finalist, if not a winner in Jones at No. 2.

Vancouver has to be kicking itself for overlooking the local boy in Theodore to take a Calgary kid in Shinkaruk. The Canucks could sure use Theodore quarterbacking their power play in the present.

I was right about Philadelphia picking a towering defenceman, but I had Zadorov to the Flyers rather than Morin. Zadorov is more proven thus far and I still prefer him, but Morin can’t be written off just yet either.

I also mocked the second round in 2013 and although my batting percentage wasn’t as high in that 31-61 range, I hit my share of home runs.

Also worth noting, I nailed Adam Erne at No. 33 to Tampa Bay and Artturi Lehkonen at No. 55 to Montreal. Like I said, 2013 was a really good year for me.