The New York Islanders relieved head coach Jack Capuano of his coaching duties Tuesday. The move was not a surprise with the team mired in last place in the Eastern Conference. The Isles have been a major disappointment so far this season. The team has clearly taken a step back after posting back-to-back 100-point seasons the past two years.

General manager Garth Snow named Doug Weight as the interim head coach, but he also indicated that he did not expect major changes in the team’s systems under Weight.

As usual, there is always more going on behind the scenes than meets the eye. Here is a look at four things we have learned as a result of the firing of Capuano and the hiring of Weight by the Islanders.

In his telephone conference with the media Tuesday, Snow indicated that one of the reasons Weight was named interim coach was that it would allow the Isles to search for a permanent replacement.

“At this time, to name Doug Weight interim coach, we can start a coaching search now and not have to worry about the ramifications of trying to do that when Jack was head coach,” Snow told reporters.

Snow also indicated Weight would keep the team’s systems in place. This seems to indicate that Weight will be more of a placeholder while the team searches for a new bench boss. Weight may very well be considered for the job if the team truly improves under his guidance, but clearly he is not “the chosen one.”

Later on Tuesday, it was reported that the Islanders received permission to speak to former Florida Panthers coach Gerard Gallant.

Hearing NYI have permission to talk to former Florida coach Gerard Gallant. He was an Islanders’ assistant from 2007-09.

The Islanders have started their coaching search. Weight may not necessarily be behind the bench for long.

2) Capuano Was Not the Problem or the Solution

Capuano took over as coach of the Islanders on Nov. 15, 2010. He was brought in to work with a young team that needed to learn how to win at the NHL level. The Islanders were looking to grow from cellar dwellers to respectability and Capuano certainly helped the team accomplish that and more. 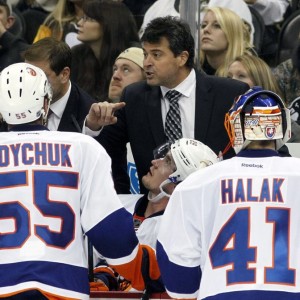 Capuano led the Islanders to the playoffs in three of the last four campaigns. The Isles also finished with back-to-back 100-point seasons for the first time since the dynasty years.

Last spring, Capuano led the Islanders to their first playoff series victory since 1993. The coach behind the bench then was Hall of Famer Al Arbour.

But Capuano didn’t demonstrate he was the man to take the team from playoff qualifier to Stanley Cup contender. The Isles could not seem to reach the next level and even seemed to take a step back this season.

The team was very inconsistent during the first half of the season and often saw five or 10 minutes of poor play cost them a close hockey game. The coach never seemed to lose the locker room, but he couldn’t get the team out of its funk either. As a result, Capuano was let go.

3) New Ownership Is Starting to Assert Itself

The Islanders’ majority ownership changed this past summer from Charles Wang to Scott Malkin and Jon Ledecky. Despite the ownership change, the team’s front office and coaching staff remained the same to start the current season. That made since given the team’s success over the past two seasons and its first playoff series victory in 23 years.

But behind the scenes, the new ownership group was starting the process of putting its own stamp on the franchise. There were numerous reports in early December that the Isles were looking for someone to join the front office to oversee hockey operations.

Now, the new owners have fired the coach after a disappointing start to the season. Gradually, we are seeing them create the organization they want in place to run their team. Expect more changes in the next few months.

4) Garth Snow Could Be Next

During his press conference, Snow admitted that he is largely responsible for the team’s present situation. “Obviously, I’m not hiding from the fact that it starts with me,” he told reporters. 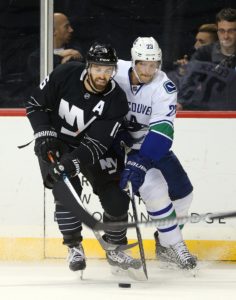 There is little doubt that many of Snow’s decisions this season have not worked out as planned. Free agents Andrew Ladd and Jason Chimera have failed to live up to expectations. P.A. Parenteau was signed but released outright before the season even started.

Snow also failed to adequately address his goaltending situation in time. The Islanders again carried three goalies to start the season and the results were not good. None of the netminders got their usual amount of practice time. Starter Jaroslav Halak’s agent openly complained about the situation and his play suffered. J.F. Berube was the third goalie and didn’t appear in a game until Dec. 10.

Halak eventually cleared waivers and was sent down to Bridgeport. The time to deal Halak would have been right after the World Cup when he unexpectedly led Team Europe to the Final. He proved he was healthy and playing well. Trading Halak would have cleared up valuable cap space and helped all three goalies. The Isles may have even gotten something in return for the veteran starter. Instead, Halak is now in the minors and the Isles received nothing for him.

Snow is mostly responsible for the step back the team took in the offseason after losing Kyle Okposo, Frans Nielsen and Matt Martin in free agency. His replacements haven’t worked out and the team no longer has much cap room to help bring in some much-needed help.

The new ownership group did not hire Snow. If the team fails to rally in the second half, they could very well dismiss the GM and bring in their own person.

Jack Capuano paid for the Islanders’ slow start this season but he was by no means solely responsible for it. As Snow told reporters, “When you’re a head coach in this league, sometimes you’re a victim of different circumstances, situations.” 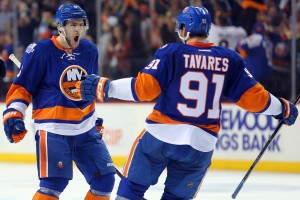 The Islanders are not as good a team as they were over the past two seasons. In the NHL, the difference between winning and losing is often very small, but the Isles need to improve their talent level and chemistry if they hope to compete for a playoff spot next year and convince John Tavares to re-sign with the team after his present contract expires in the summer of 2018.

It is always easier to fire one head coach than it is to fire 23 players. Jack Capuano’s firing was the first move made by the Islanders to address their current problems. It most certainly will not be the last.