The Canadian Amateur Hockey Association and Russia have been at odds and chances are that the chilliness of their relationship will evolve into an all-out sporting Cold War. Jim Proudfoot reports in the Toronto Star that Gordon Juckes has told other CAHA executives that the organization should review the situation and decide whether it even wants to deal with the Russians in the future.

The Soviets love to bring teams to Canada. They feel that they get to play better competition and thus improve their game. They also find the tours quite profitable, and make no mistake, it’s that way for the Canadians as well. But it’s no bed of roses for the organizers, at least on this side of the Atlantic.

Russian a Pain to Deal With 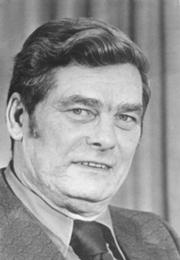 Gordon Juckes, secretary-manager of the CAHA.

Juckes says that the Russians are terrible to deal with and that problems, perceived or real, had to be constantly dealt with to keep the visitors happy.

“If we’re to encounter the same difficulties we had during the Russians’ last tour, I feel we should consider seriously whether to issue another invitation.

“We quartered them at the best hotels and their food requirements were exorbitant, yet we received nothing but complaints.

“Many Canadian commentators and writers accepted their psychological warfare without reply.

“Their coach’s constant criticism of one of our national players, Roger Bourbonnais, was accepted even though in Canadian hockey this player enjoys a reputation for clean play.

“I felt their coaches went far beyond proper bounds in trying to soften us up for international competition. Their steady harping about the referees was an example.”

Despite Juckes’ complaints about the Soviets, the CAHA will invite them to the centennial celebration tournament to be held in 1967. The Russians are a huge draw and the events have to be paid for somehow. Czechoslovakia, Sweden and possibly the United States will also be invited to play, along with our national team.

Our Nationals to Play in Moscow Next Season 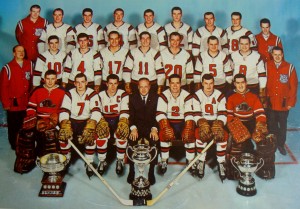 Russians complain about rough play from the Sherbrooke Beavers

In addition, our nationals are committed to playing three games in Moscow sometime during the next hockey season, likely during the Christmas holiday season.

The CAHA, and Juckes in particular, is tired of Canadians constantly being portrayed as villains by the Russians. The latest controversy involves the Sherbrooke Beavers, who won the Allan Cup last season. The Allan Cup is emblematic of Senior Hockey supremacy in Canada.

The Beavers recently played three games in the Soviet Union and reports of rough play caused the Canadian ambassador to threaten to cancel any remaining games if the Sherbrooke club didn’t scale back on their aggressive play.

Juckes feels that the ambassador is relying on one-sided reports from the Russians and that Canadian hockey has received a black eye which it doesn’t deserve.

The CAHA has approved $152,000 for two major tournaments in 1967, including the four-team international affair mentioned above. The other tourney will be a national competition for the minor hockey midget age group. The hockey organization will apply to the Centennial Commission for two grants, one for each project.

The international tournament will see the teams play each other twice between December 9 and 23. Cities across Canada will be involved. Each team will play twice in the Winnipeg Arena, Montreal Forum and Maple Leaf Gardens in Toronto.

The CAHA will seek approval for the tournament from the International Ice Hockey Federation at the World Championships in March in Yugoslavia.

The midget tourney will be a round-robin event that will take place during the Easter holiday in 1967. It is expected that about 240 players in the 14- to 16-year-old age group will participate. The site has not yet been determined. 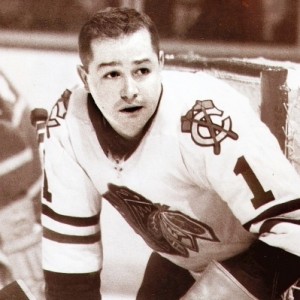 The National Hockey League’s mid-season all-star teams have been announced and there is a definite red hue to the lineup. Members of the Chicago Black Hawks and Detroit Red Wings took nine of the 12 positions on the first and second teams. Montreal placed a man on each of the first and second teams and Toronto had one player selected to the second team. New York and Boston didn’t have a player named.

The first team has three members of the Black Hawks. Glenn Hall is the goaltender, Bobby Hull is at left wing and Pierre Pilote is one of the defensemen. Gordie Howe and Norm Ullman of Detroit fill out the other two forward positions at right wing and centre respectively. The second defenseman is Jacques Laperriere of Montreal.

The second team has Roger Crozier of Detroit in goal. The defence is manned by the Wings’ Doug Barkley and Allan Stanley of Toronto. The forwards are Stan Mikita, Chicago at centre, Doug Mohns of the Hawks at left wing and Canadiens’ Bobby Rousseau on the right side. 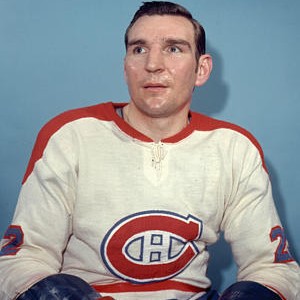 John Ferguson may need to undergo surgery to correct a sinus problem.