In virtually every NHL season, there are teams that seem to come out of nowhere to surprise the league and make a mad dash to the playoffs (2008-09 Columbus Blue Jackets, 2009-10 Phoenix Coyotes), while there are others (2010-11 New Jersey Devils) that are forecasted to do big things, but then fail to deliver the goods.

In this current edition of the NHL, this trend has continued. The Toronto Maple Leafs are atop a division that the Bruins and Sabres were supposed to battle for, and the Anaheim Ducks have struggled mightily out of the gate after a promising campaign last year. With the possible exception of the Edmonton Oilers, however, there isn’t a team in the league that has baffled hockey pundits more than the Dallas Stars. Even after losing superstar Brad Richards to free agency in the off-season, they have thrived this year behind the thrilling goaltending exploits of Kari Lehtonen and the offensive jump provided by guys like Sheldon Souray and Jamie Benn.

These stories have all been fascinating for the Stars, but they encountered a big test over the past few days as they hit the road to take on two of the league’s elite franchises. Friday saw them former teammate James Neal in Pittsburgh against the Penguins, and Saturday brought them to Joe Louis Arena to battle the suddenly resurgent Detroit Red Wings. These two games seemed perfectly placed to give the Stars an opportunity to prove that they are a legitimate contender for a playoff berth, but instead the games served to lend some doubt to the team’s chances. 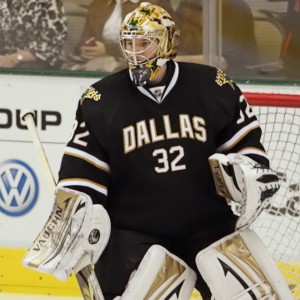 They ended up losing Friday’s tilt 3-1 in Pittsburgh, and lost defenseman Alex Goligoski to a broken thumb as well. Saturday wasn’t much better for Dallas, as they lost 5-2 to the Red Wings. They gave up 40 shots on goal to the Wings, and the three third period tallies they surrendered were equally concerning.

After those two losses, the question resounds louder than it has yet in the early going this season: are the Stars a real contender for a playoff berth in a tough Western Conference? Can they keep up the quality play that has defined their season through 16 games, or will they fall back to Earth and finish around where hockey pundits predicted that they would?

One potential clue to the Stars’ fortunes the rest of the way was provided by their defense in these two games. Granted, they are only allowing 2.56 goals per game, which ranks them around the middle of the league, but their defensive unit looked largely passive and uninspired both in Pittsburgh and Detroit. They seemed content to collapse around the net instead of trying to pursue the puck, and the result was a slew of possessions by the opposition that lasted for long periods of time. This wore out both the defensive players and goaltenders Andrew Raycroft and Kari Lehtonen, and it could have a lasting impact on the club as the season moves forward.

This passive defensive style has led the Stars to the worst record in the league in terms of allowing shots, as they are allowing 33.4 per contest. The stellar play of Lehtonen has helped in that regard, but as we saw on Saturday especially against Detroit, when they’re allowing tons of quality chances and doing very little to disrupt the puck cycling of their opposition, they will eventually allow goals, and it prevents their offense from really getting things going.

That last sentence provides another revelation about the Stars, and that regards their ability to generate a consistent attack. They are in the top-10 in the league in scoring, but they are currently ranked 24th in shots per game, and in these two road tilts they showed why they haven’t been able to get much rubber on net. For many of their possessions, they seemed content to just fire shots from out on the wing on the rush instead of trying to get traffic in front, and while it is recommended to just get pucks to the net, giving goalies unfettered access to the puck isn’t the way to succeed.

It could have been fatigue showing its ugly head, because statistically the team is good on offense at both even strength and on the power play. Before last night’s game, the Stars were the best team in the league in goals for/against ratio at even strength, and with last night’s loss, they dropped to fifth on that list. Of course that has more to do with the play of Lehtonen than their defense (as discussed above), but it still shows that their offense has worked for a good chunk of the season, but the comparatively small sample size of these last two games would suggest otherwise. 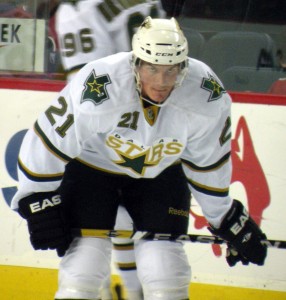 The power play was only successful on one out of its four chances over the weekend, but that successful goal scoring effort showed some promise for the team going forward. They moved the puck well around the perimeter against the Wings, and they also got some good traffic in front. Their puck pressure was relentless in the offensive zone as well, and they finally scored the goal with only seconds remaining on the advantage.

With positives and negatives coming up all over the place for this club, it’s hard to determine at this point whether or not they will continue to find success this year, but the smart money would probably have to be placed on the latter at this point. It’s hard to imagine that Lehtonen will continue to flourish, especially if he’s faced with the constant barrage of shots that he’s had to face so far this season. They should continue to be good on offense with Loui Eriksson and Jamie Benn headlining the attack, but they will need to be a bit more aggressive and stop settling for weak chances if that will be the case.

Overall, the Stars could very well make the playoffs this season, but they are going to need to make some tweaks to their recipe to do so. If Glen Gulutzan insists on keeping the same formula that has propelled them through 16 games, then he could be in for a rude awakening in a conference that looks as tough as ever.