This week, a few teams did not change position from their spots in Week 7. The top two remained the same, but three teams managed to crack the top 10 as a result of their performances and rise in their conference’s standings.

Here is a new look at how the AHL shakes out as we head into play for the final week of November.

The Heat had no trouble bouncing back after seeing their nine-game winning streak come to an end, as they have now won their last four games. Paul Byron had three points in a 4-0 shutout of the Iowa Wild on Saturday, while in Sunday’s rematch, Ben Street had both goals to give Abbotsford a 2-1 win.

Springfield has won six straight games and had a pair of five-goal games this weekend over the Albany Devils and Providence Bruins. Center Jake Hansen leads the AHL with three shorthanded goals for a penalty kill that ranks first overall with a 90.3 percent success rate.

The Griffins are on a three-game winning streak and blanked the Milwaukee Admirals 5-0 on Wednesday night. Mitch Callahan had a hat trick, and Adam Alquist picked up three assists. Goaltender Petr Mrazek made 16 saves to pick up his first shutout of the season.

Hamilton finds its way back to the top 10 after winning its last four contests. The Bulldogs rose to the challenge this week in defeating formidable opponents Texas and Syracuse. Dustin Tokarski was named AHL Player of the Week after going 3-0 with a .980 save percentage and 0.67 GAA.

Manchester continued its success last week by beating the Worcester Sharks on Friday and the Bruins on Saturday, but got stumped by a mediocre Sharks club in a shootout on Sunday. Jordan Weal is third in the AHL with 15 assists and second on the Monarchs with 17 points.

The Sens are one of two AHL teams who have yet to lose in overtime or the shootout. Although they ended a seven-game win streak against the Hershey Bears on Saturday, they came back on Sunday by scoring four goals in the third to win 5-1. Stephane Da Costa and Mike Hoffman each had three points, while Andrew Hammon made 34 stops in net.

The Penguins dropped the first game of a weekend set with the IceCaps, but scored four goals in the third period on Saturday to take a 5-2 win. Zach Sill tallied in his first game back after returning from Pittsburgh, while goalie Eric Hartzell made 28 saves for the win in his AHL debut. WBS also beat Rochester 3-1 on Wednesday. 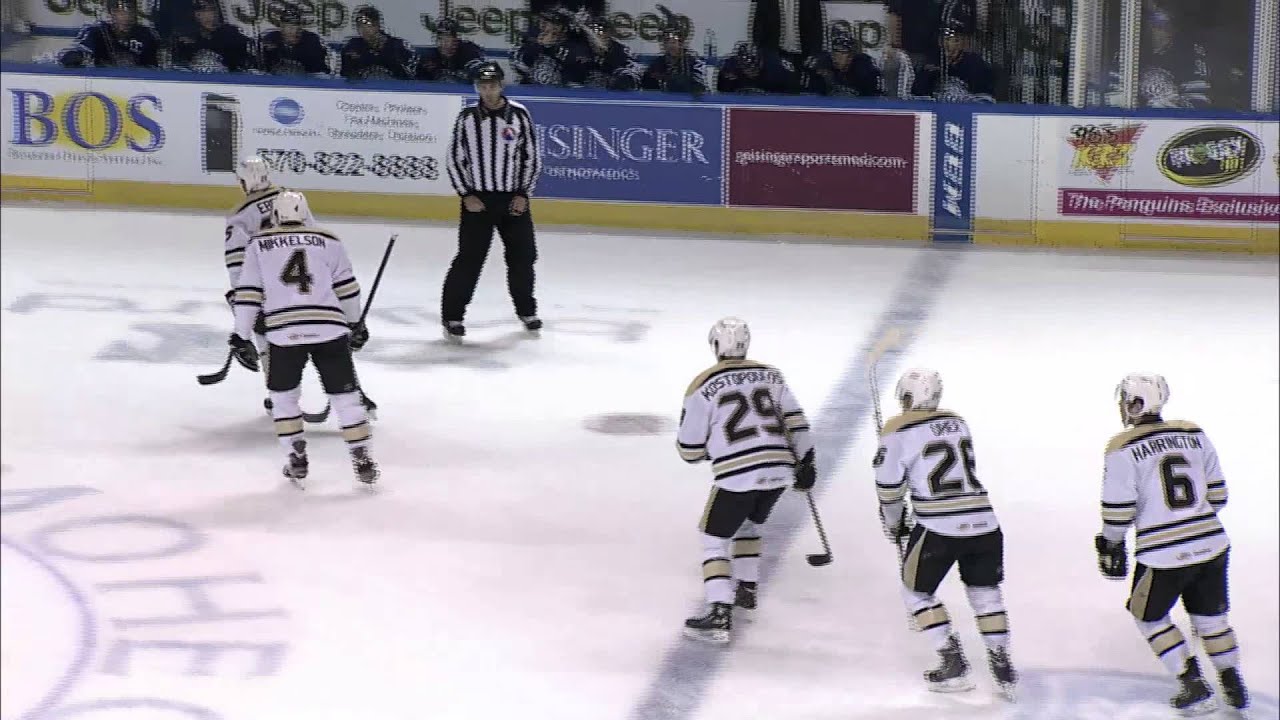 Albany cracks the top 10 partly thanks to its shutout of Hartford on Wednesday. Keith Kinkaid, one of the top goalies in the league, made 24 saves. Tim Sestito followed with a three-point effort as the Devils beat the Phantoms 5-3 on Saturday.

The Marlies won two out of their three games this week, only stumbling against the Texas Stars. They scored at least three goals in both wins. T.J. Brennan is tied for third in the AHL with 11 goals and has 21 points in 18 games.

Texas broke a three-game losing skid on Saturday with a 5-2 over Toronto. It still picked up points in two games, though, as it fell to the San Antonio Rampage in a seven-round shootout. Colton Sceviour is first in the league with 14 goals and has 22 points on the season.

St. John’s went 1-2 in the first three games of its six-game road set. It beat WBS 2-1 on Friday, but gave up four goals in the third period on Saturday and then lost to a struggling Sound Tigers team 4-3 on Sunday. Goalie Eddie Pasquale is tied for third in the AHL with eight wins and also has a 2.37 GAA and .921 save percentage.

The Rampage notched a dominating 6-1 victory over the Barons on Tuesday, led by Jacob Markstrom making 36 saves on 37 shots. San Antonio also took a 4-3 shootout victory with intrastate rivals the Stars before falling to the Marlies on Sunday.

Despite being blown out by Grand Rapids on Wednesday, the Admirals earned points in overtime and shootout games with the Heat and Chicago Wolves. Colton Sissons remains the team’s leading scorer with seven goals and 13 points.

The IceHogs beat the Checkers 4-3 on Sunday to split a weekend series, but have lost three of their last five games. Adam Clendenning has 14 assists as one of the league’s top playmakers and leads Rockford with 18 points.

The Monsters responded to a 6-1 loss to Oklahoma City on Thursday by taking the next game by a score of 5-3. Andrew Agozzino had two goals, and Joey Hishon added three points. Lake Erie also scored twice on seven power-play opportunities to boost a unit that is eighth in the AHL with a 20.5 percent success rate.

The Comets still have the AHL’s worst record, but seemed to gain some ground this week by beating the Americans twice. Joacim Eriksson had 33 saves in a 2-0 shutout performance on Saturday, and Patrick Mullen posted two points in Friday’s 3-2 victory.

Upcoming: Tuesday vs. Lake Erie, Friday and Saturday at Abbotsford

Norfolk needed extra time to take a win from the Portland Pirates on Friday by a 3-2 score, but lost 4-3 in a shootout on Saturday. Defenseman Alex Grant had four points in the two games and has six goals and 12 points to lead the Admirals in scoring.

Upcoming Schedule: Wednesday vs. Charlotte, Friday and Saturday vs. Providence

The Bruins are cooling off after a hot start and have dropped four of their last five games. However, they still have two of the AHL’s top scorers, as Matt Fraser is tied for third with 11 goals and Nick Johnson has nine goals to rank fifth.

Upcoming Schedule: Friday and Saturday at Norfolk, Sunday at Hershey

The Wolves’ 3-2 shootout loss to Milwaukee on Friday ended their stretch of five straight wins, and then they lost a 2-1 contest to the Griffins on Saturday. Goalie Jake Allen has an 8-3-2 record to go with a 2.21 GAA and .928 save percentage.

Both of the Sharks’ wins this week came in the shootout. Bracken Kearns had two assists as they beat the top-ranked Monarchs 3-2 on Sunday and leads the Sharks with 13 points on the year.

Syracuse has stumbled a bit and may have more problems ahead with top rookie Nikita Kucherov, among others, being called up to the Tampa Bay Lightning. The Crunch may look to second-year forward Vladislav Namestnikov, who is second on the team with 21 points, to pick up some of the slack.

The Wolf Pack had a disastrous week, losing twice by way of shutout against the Falcons and Devils. Danny Kristo and Aaron Johnson are tied for the team scoring lead with 16 points apiece, while Kristo is tied for fifth in the AHL with nine goals. Hartford could make up ground this week against dismal teams in Porltand and Bridgeport, but Saturday against Manchester will be no easy task.

The Bears hold on to the 23rd spot after beating Binghamton 5-2 on Saturday, but failing to generate any more offense when they tied the score 1-1 in the second period of Sunday’s game. Jeff Taffe is the Bears’ top scorer with 11 points, but this team is falling short of expectations under new head coach Mike Haviland.

Like the Bears, the Barons do not move this week after going 1-2. Travis Ewanyk and Anton Lander each had two goals in Thursday’s 6-1 thumping of Lake Erie while scoring on three of eight power-play chances. The Barons’ man advantage is ranked 11th in the AHL at 18.8 percent.

Charlotte beat Rockford on Saturday to snap an eight-game losing skid behind two goals from Justin Shugg and three points by Zach Boychuk. But the Checkers couldn’t keep momentum on Sunday in a 4-3 loss. Rick DiPetro got the start for Charlotte and registered 26 saves on 30 shots.

Upcoming Schedule: Wednesday at Norfolk, Saturday and Sunday vs. Milwaukee

The Pirates are winners in three of their last five, but their victory this week came in a 4-3 shootout over Norfolk. Three of four shooters scored in the extra frame, with Ethan Werek sealing the deal in the fourth round. Andy Miele is currently one of three Pirates players with six goals and leads the team with 14 points in 13 games.

Bridgeport has lost its last six games but picked up two points in shootout losses against Providence and Worcester this weekend. Ryan Strome is second among AHL rookies with 19 points.

The Phantoms have lost four in a row and could not get past intrastate rivals Binghamton and Albany this weekend. Bruno Gervais had three points on Saturday as the Phantoms fell 5-3 to the Devils.

Rochester again finds itself in the bottom of the pile after dropping two games to a poor Utica squad in addition to a loss to the Penguins on Wednesday. The Amerks are now on a four-game losing streak and second-leading goal scorer Mike Zigomanis (seven goals) will have to be one of the players to step up with Luke Adam on recall to Buffalo.

The Wild have lost their last six games and have either scored just one goal or been shutout in five of those defeats. Brett Bulmer has six goals, but just seven points, and leading scorer Brian Connelly has 11 assists, but no goals.