The Boston Bruins come into the NHL Draft in Vancouver with four of the first 71 picks slated to be used on the night. Boston has struggled to cope with the first season after the lockout, finishing with the fifth-worst record in the League. This is their first attempt to reload for the upcoming season and revive their status as a proud Original Six franchise.

Drafting sniper Phil Kessel is a good start with the fifth overall pick. Their next pick, defenseman Yuri Alexandrov, doesn’t exactly pan out the way they wanted to. With the 50th pick, interim general manager Jeff Gorton selects hometown winger Milan Lucic, a player described by many as a prototypical power forward. The complete package of size, skill and grit inside of a 6’3, 18-year-old body is exactly what Boston desires.

From there, the legend was born.

Opting to play the 2006-07 with the Vancouver Giants in the Western Hockey League, Lucic teased Bruins Nation with a mere preview of what he would bring to the table. He went on to score 30 goals and 68 points with 147 penalty minutes in 70 regular-season games. The Giants captain then went on to lead his side, which included current NHL stars like Evander Kane and Cody Franson, to a Memorial Cup championship in Vancouver. Lucic scored 26 points in 27 total games, making him the unanimous choice as tournament MVP.

The next season, he made the Bruins roster straight out of camp and debuted in Boston’s first game of the season in Dallas. It didn’t take long for Lucic to endear himself to the Black and Gold faithful.

His first NHL fight came against Brad Winchester before recording a Gordie Howe hat trick a week later in Los Angeles. A first period fight against Raitis Ivanans and a primary assist on Aaron Ward’s second period goal was topped off by scoring the eventual game-winning goal in the third period of an 8-6 victory. In his first home game, an early first-period fight over Tampa Bay Lightning enforcer Nick Tarnasky won over the TD Garden crowd in a heartbeat.

Lucic would go on to record 27 points in 77 games and was involved in 13 of Boston’s 52 scraps that season. Combined with Shawn Thornton, the two would go on to become the Bruins’ feared duo of enforcers for several years to come.

The 22-year-old set a career-high in goals (30) and points (62) while piling up 121 PIMs in 79 games. It had taken four seasons but the Bruins finally had their new power forward similar to the mold of team president Cam Neely. Lucic was beloved in Boston and feared around the League.

Boston would go on to embark on a 25-game odyssey in the playoffs that culminated in a Stanley Cup victory in seven games over the Canucks. For Lucic, having the opportunity to hoist hockey’s greatest prize in his hometown is a script only Hollywood could write.

As he grew into his own as an NHL player, Lucic also played a major part in resurrecting the Bruins back to the summit of the League.

In the next two seasons, he only missed three games scoring 33 goals and 88 points while racking up 220 penalty minutes. His performance earned Lucic a three-year contract extension worth $18 million, committing his future to the Bruins….or so it seemed.

After signing the new contract, the physicality and toughness that was a staple of his NHL career dwindled and so did his point totals.

The 2014-15 season saw the now 26-year-old score 44 points but did not bring a consistent effort to the rink every night. For long stretches of time, it was hard to notice the big, bulky winger on the ice. He did record 259 hits but something was not quite right.

The Bruins would go on to miss the postseason for the first time in nine years and general manager Peter Chiarelli, who adored Lucic, was canned by the brass. In came Don Sweeney to rebuild the club going forward but their number 17 wouldn’t be a part of it. Nine years after Lucic was drafted by the club, he was sent to LA by Sweeney in exchange for Colin Miller, Martin Jones and the Kings’ first-round pick. 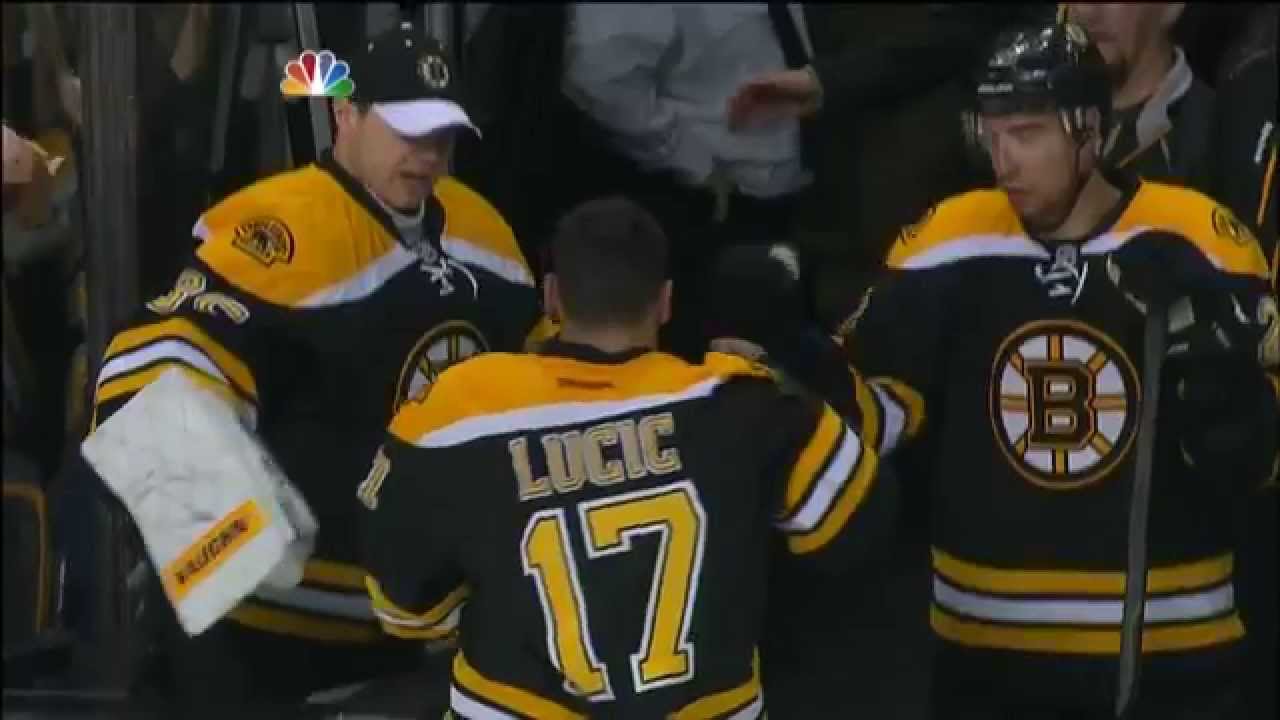 It was the end of an era. During his eight years in Boston, the power forward led the team in goals (139) and penalty minutes (772) and finished in the top-five for assists (203), points (342), plus-minus (plus-94), game-winning goals (26) and power-play goals (20). Say what you will about how he left, but make no mistake: Lucic was a vital piece of the Bruins renaissance.

He is now working his magic in the City of Angels with 30 points in 50 games and 66 penalty minutes while Miller shows promise to be a key player for the Bruins going forward. The rookie defenseman is holding his own under coach Claude Julien.

When the Bruins and Kings get together for the first time since the trade on Tuesday night, it is sure to be an emotional evening within the walls of TD Garden. Boston fans are sure to give Lucic a very warm reception for his contributions to the Black and Gold revival.