COLUMBUS, Ohio — Daniel Sprong scored 1:19 into overtime to lift the Anaheim Ducks over the Columbus Blue Jackets 2-1 on Saturday night.

Adam Henrique won a faceoff in the Ducks offensive zone, and Sprong beat Sergei Bobrovsky with his second goal of the night. 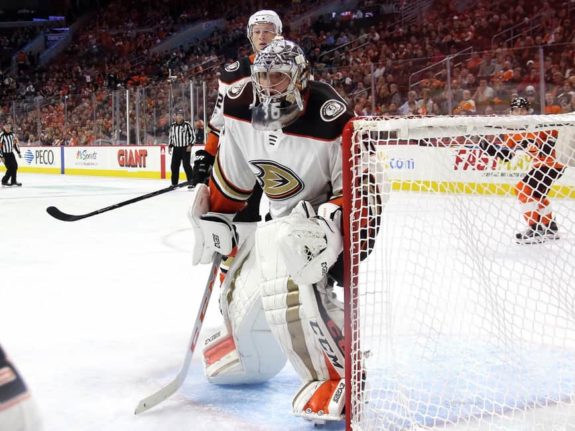 Markus Nutivaara scored in the first period, and Bobrovsky had 20 saves for Columbus, which has lost five of seven.

The Blue Jackets started it at 12:06 in the first period when Boone Jenner won a faceoff and shovelled it back to Nutivaara, who rifled in a slap shot from above the left circle. It was his fourth goal of the season and first in eight games.

Later in the period, Sprong tied it when his shot from the goal line glanced off Bobrovsky while the goalie was trying to seal the near post.

NOTES: Anaheim forward Kiefer Sherwood, who grew up in the Columbus suburb of New Albany, played his first game at Nationwide Arena. His younger brother Kole Sherwood is a Blue Jackets prospect. … Ducks F Andrew Cogliano played in his 900th NHL game. … Columbus F Anthony Duclair was a healthy scratch for the second straight game. Lukas Sedlak replaced him in the lineup. … The Ducks kicked off a five-game road trip. Their only loss since Nov. 25 was a 4-1 defeat to the Carolina Hurricanes on Dec. 7.

Anaheim: At Pittsburgh on Monday.