The New York Rangers, like many teams this season, have been plagued by injuries to key players. Not having their full complement of players may be having an effect on team chemistry and their ability to string wins together. Combine that with players like Anthony Duclair, Jesper Fast, Lee Stempniak, Tanner Glass, and J.T. Miller all moving in and out of the lineup in undefined roles, and you can understand why the Rangers haven’t been ale to win more than three games in a row this season. The one element of their game that has seen some consistency lately is the power play.

Key Players Back in the Lineup 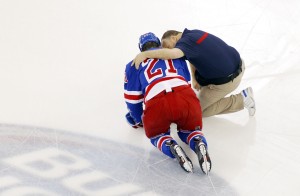 The key free-agent acquisition during the summer was Dan Boyle, who was expected to replace Brad Richards as the quarterback on the power play. Despite being more defensively responsible than Richards, Boyle has made a career out of his offensive prowess on the man advantage. Last season in San Jose, Boyle recorded 6 goals and 12 assists on the power play, and in his prime in ’06-07, he registered 10 goals and 27 assists for 37 power play points. Though he has missed significant time this season, he has 2 goals in 8 games, both of which came on the PP.

The marker that signaled the change in the team’s power play was the return of top-line center Derek Stepan to the lineup November 8th against Toronto. Since then the Rangers have scored 8 goals on 40 opportunities (20%) and Derek Stepan has assisted on six of those. Stepan brings an element of creativity, patience, and a right-handed shot to balance out left-handed St. Louis, Nash, and Brassard on the top unit

With their full complement of players at their disposal, the Rangers have been able to harness their players unique skills by combining creativity with structure. Most hockey players are familiar with the three main power play setup options; Umbrella, Shooting (5 on the dice), and Overload. Assistant coach and power play architect Scott Arniel has installed a hybrid amalgamation of all three, and has gotten the players to buy-in. 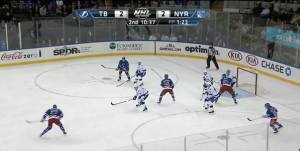 Umbrella setup on the powerplay goal by Martin St. Louis 12/1/14

The umbrella power play is widely used by teams that have offensive defensemen with good point-shots. It features one point-man at the top, two players usually at the tops of the circles as outlets, and two players in front of the net for a double-layer screen. The Rangers struggled early on with the injury to Stepan because they didn’t have a suitable right-handed shot to play the circle opposite St. Louis. One of the few power play goals they scored during this time was by Chris Mueller, a right-handed shot who took Stepan’s place and scored against New Jersey on a one-timer.

Mueller didn’t have the kind of success on the man advantage that they had hoped after this example, and has since been sent down as Kevin Hayes has taken control of the third-line center position. With Stepan back, the Rangers now have a right-handed shot ready for one-timers on the off-wing, as well as left-handed St. Louis opening up for one-timers on his off wing. Both players are also skilled enough to find the seams through the opposing team’s box and open up opportunities for their teammates.

In this example, the Rangers transition from a shooting setup to the umbrella and open up a pass from St. Louis to Brassard in the middle of the box. Brassard draws coverage allowing Stepan time and space on the far side. Stepan doesn’t have a shooting lane and instead dishes back to McDonagh for a one-time shot on net while St. Louis moves from the near-side circle down to the side of the net where he picks up the rebound and scores. Having St. Louis on his off-wing plays a role here in allowing him to quickly one-time the rebound. Another crucial element was the pass into the middle of the box by St. Louis which opened up time and space, as well as the point shot by McDonagh who was filling in for Dan Boyle on the top unit. Dan Boyle, when healthy, is expected to be that point man, and he has established good chemistry with Stepan and St. Louis which has led to his two power play goals.

Shooting/ 5 on the Dice

In this setup, the Rangers use a wide box with one player positioned in the center of it.  They can easily transition between this setup and the umbrella as seen in the previous example. The Rangers work the puck in a triangle from the point, to the half-wall, to the center, and can quickly change from the far side to the near side to keep the penalty killers from limiting time and space. This also opens up room inside the penalty killers’ box which is something most PK units focus on trying to limit or eliminate altogether.

As you can see here, the Rangers set up in a large box with Stepan in the middle. They work the puck from the point to the half-wall and then quickly into the center of the oppositions penalty kill box. This is where Stepan can isolate one or more defensemen and dish the puck to the back side where there is no pressure on Boyle and he finds the back of the net. Working the puck into the center of the box has been a crucial element of the Rangers success on the power play. Players like Stepan and Brassard are usually in that spot that can be patient enough with the puck to draw defenders to them and find the open man.

NYR vs Pit. Brassard scores off the half-wall

One of the most common setups in the game at all levels is the overload. It features one player in the corner, one on the half-wall, one at the point, one in front of the net, and the back-side defenseman reading the play and adjusting position. The Rangers commonly will change from their initial umbrella set up into the overload by having Rick Nash pop out from the front of the net and drop to the corner to support Martin St. Louis on the wall. The two work the puck between themselves and look for either the back side defenseman, the man in front, or Nash looks to skate the puck from the corner to the slot to draw coverage.

In this example, Nash pops out, works a give and go with St. Louis who dishes to the point and Nash heads back to the front of the net to draw coverage. Brassard then grabs the rebound and uses his poise to find St. Louis sneaking in off the wall for the goal. This alignment is useful in that it allows the Rangers an option down low in the offensive zone when plays at the top of the zone aren’t forming properly.

In this example, Nash pops out to the near corner to support Derek Stepan on the wall and this allows Brassard to open up for the one-timer. Whether Nash pops out to either side to engage the overload or stays in front to screen the goalie in the Umbrella, the Rangers are utilizing their players best by switching in and out of these three main setups. They can create offense from the top of the offensive zone, the middle area, or down low below the goal-line by switching and rotating. Quick puck movement and the constant rotation of players causes confusion for the penalty killers and doesn’t allow them to limit time and space. Aside from the x’s and o’s there are smaller detailed adjustments that have been made.

One of the most important elements of any power play is zone entry. Teams that can’t enter the zone cleanly often kill their own power play by wasting time in the neutral zone re-grouping. When a team can’t enter cleanly and is forced to dump and chase, puck retrieval is critical. If a team dumps the puck in and is consistently unable to regain possession, the shorthanded team will clear the zone and kill off 15-20 seconds with every icing. The Rangers have been getting clean zone entries by utilizing 5-10 foot passes near the offensive zone blue line, but when they are forced to dump in or when they lose control in the zone, they have been able to regain possession.

In this example, the Rangers do not have a clean entry and are forced to dump the puck in. The puck is wrapped around the boards by Andrew MacDonald and St. Louis makes a good play on the wall to stop the puck. Derek Stepan is in perfect position to support St. Louis and offer an outlet when he is pressured. Stepan shows great poise and finds Boyle who fires through a screen for the goal. Though Rick Nash’s position in front is the critical, the reason the play is allowed to develop is the puck retrieval by St. Louis and the support by Stepan.

Zone entry, puck retrieval, and puck support are all details that can take a struggling power play and turn it into a reliable offensive tool. These are things that coach Scott Arniel surely addressed when the power play was struggling early on, and with key players back in the lineup, it all seems to be coming together for the Rangers. Derrick Brassard highlighted the team’s attention to detail, “Every day we have power-play meetings with [assistant coach Scott Arniel] and we know every stat, everything they do. We know everything.” That preparation, combined with the innovative new positioning, seems to have paid off for the Rangers thus far.