The proud city of St. Louis has seen eleven World Series titles, one NBA championship, and one Super Bowl victory. And yet, over a span of 45 seasons, nary a Stanley Cup.

David Backes did his best to help the Blues take their first step toward breaking that streak.

“I was proud of the way we fought back,” St. Louis coach Ken Hitchcock commented, perhaps unintentionally alluding to the physicality of the game as well as the outcome. “And if we didn’t, this was going to be a short series.”

After falling to the Sharks at home Thursday night and losing the home ice advantage in the process, St. Louis played with a sense of desperation Saturday night, knowing full well that going down 0-2 heading back to San Joe would have been a monumental obstacle to overcome. “We really needed to win this game at home,” said Blues forward Andy McDonald. “There was a lot of fire in the guys and everybody stood up for each other, so it’s a great sign.” 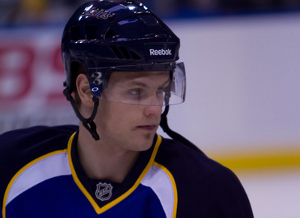 The Blues struck early. Just 1:31 into the game, defenseman Kris Russell hit Vladmir Sobotka in stride as he entered the Sharks’ zone. Sobotka skated to the top of the left faceoff circle and blasted the puck on net. San Jose goalie Antti Niemi made the save, but the puck trickled behind him toward the goal line. Defenseman Marc-Eduoard Vlasic attempted to sweep the puck away, yet inadvertently knocked it into the net instead for the quick 1-0 St. Louis lead. “It just popped up,” said Vlasic. “That’s it. The game’s easy when you’re sitting in the press box but it is what it is.”

A statistically-even first period gave way to a dominant Blues’ second period, which saw them fire 17 shots on net versus ten for the Sharks. Tempers also began to flare and featured the game’s first fight between unlikely combatants Kris Russell and Joe Pavelski, along with roughing minors by B.J. Crombeen, Patrick Marleau and Brent Burns. The only goal of the period was scored by David Backes, who parked himself at the left faceoff dot as T.J. Oshie fought his way down the right boards, stickhandled, moved laterally to the slot and slid the puck brilliantly to the St. Louis sniper, who deposited it into the nearly-open net for the 2-0 advantage. As the horn sounded to end the period, the Blues maintained the 2-0 edge, having outshot the Sharks 27-20 in the process. Afterwards, St. Louis coach Ken Hitchcock praised his team’s effort in the period, saying they had played “very, very well” in the frame.

One setback for St. Louis in the period: defenseman Barret Jackman accidentally collided with goaltender Jaroslav Halak in an attempt to break up a play, forcing Halak to leave the game. He will make the trip to San Jose, but in a precautionary move, the Blues called up goaltender Jake Allen from their AHL affiliate in Peoria

In the third period, emotions reached a fever pitch. Already having had eight penalties between the two clubs whistled in the first 19:12, the Blues’ Andy McDonald scored on a 5-3 advantage with just 25 seconds left, poking the puck past Niemi from inside the crease. With tempers already spilling over, the final horn saw them erupt, as eight total players became involved in various battles on the ice, with Sobotka breaking Dominic Moore’s nose with what Sharks coach Todd McLellan termed “a sucker punch”. Officials needed a full five minutes to break up the altercations and send the teams back to their respective dressing rooms.

McLellan was in a foul mood after the game, clearly believing the Blues had crossed the line. “The instigator, the sucker punch, the blow to the head, the broken nose, what do you think I thought of it? It’s everything we’re trying to get rid of. The rest of it in the corner, the men that looked at each other and got at it, that’s part of playoff hockey. But the sucker punch is unacceptable.”

Hitchcock was obviously far more pleased with the outcome. “I think we grew up a lot today as a team,” he said.

“Both teams were emotionally involved in the game,” McDonald noted. “I thought maybe in the first game we were lacking a little bit, so it was nice to see tonight. I thought we played with a lot of passion.” Sharks captain Joe Thornton shrugged off the allegations of rough stuff by his team, including an elbow to the head of McDonald by Brent Burns that broke his helmet, drawing a roughing penalty. “It’s the playoffs.”

In the end, the Sharks got what they wanted — a split on the road. The teams now head to San Jose with messages having clearly been sent both ways in the first two games. “When things get really tough and physical,” said St. Louis Blues forward T.J. Oshie, “that’s when we’re at our best.” Joe Pavelski was equally defiant: “No one’s backing down.”

Game three will be played at the HP Pavilion in San Jose on Monday night, with the puck scheduled to drop at 7:00 PDT. With the bad feelings between the two clubs already on full display, the first drop of blood might spill at 7:01.