As the off-season unfortunately lingers far longer than anyone hoped, we’ll be keeping tabs on the developments in Columbus, as well as some of the overall issues affecting the club and the game.  Blue Jackets Beat will be my vehicle for these overall updates.  While we all hope for some more on-ice new in the near future, there are still plenty of things going on that are worthy of discussion.  Here goes:

With the second lockout in eight years sapping the energy from fan bases around the NHL, public relations personnel for the thirty NHL squads face formidable tasks in keeping fans engaged and the NHL game relevant.  For a franchise such as Columbus, emerging from the fog of a last place season and the turmoil engendered by the massive roster upheaval engineered this summer, it is perhaps a more arduous task than average. Despite what many might say, that difficulty has nothing to do with the viability of Columbus as a “Hockey Market”.   The Blue Jackets’ base of operations is frequently lumped in with such venues as Florida, Dallas, Phoenix, Nashville and Tampa Bay in discussions of “non-traditional” hockey markets — and the ostensible lack of wisdom in pursuing the sport in such marginal locations.  As those who have had the opportunity to catch the 2007 Draft and the 2008 -2009 Playoffs will attest, the Blue Jackets enjoy an enthusiastic and increasingly 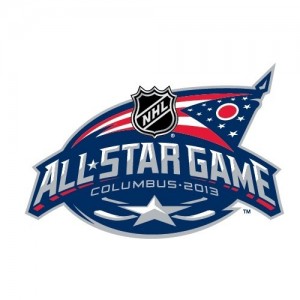 knowledgeable market.  The challenge in Columbus has not been the creation of interest in hockey, as it has been the task of carving out its own niche in an area previously shared by fans of the Penguins, Blackhawks and Redwings.  Their operational issues have derived primarily from the unfortunate combination of a poor financial structure and underperformance on the ice.  A considerable argument can also be made that bad luck has played an equally significant role, as the club has suffered through two lockouts in its first dozen years of existence.

Nonetheless, the members of the  Blue Jackets’ PR staff have been donning thinking caps and conceiving some creative ways to keep the fan base energized and active.  As this piece goes to press, the club is hosting a game-watching party, leveraging the popularity of the NFL “Battle of Ohio” between the Browns & Bengals with appearances by former Blue Jackets players to provide a much-needed infusion of energy.  In another innovative move, the club is offering season ticket holders the opportunity to appear for taping of promotional videos/commercials, free ice skating sessions at Nationwide Arena and has fully embraced social media as a way of connecting with the faithful.  As the old adage goes “When you have lemons, make lemonade”, and the public relations folks are doing that well.

It is ironic that the organization — like the others — is confronted with the need to generate and perpetuate interest in mid-October, as the staff was likely looking forward to capitalizing on the arrival of Brandon Dubinsky, Artem Anisimov, Tim Erixon, Nick Foligno, Adrian Aucoin and Sergei Bobrovsky, among others.  Similarly, expectations are high that youngsters Matt Calvert, Cam Atkinson, Ryan Johansen and John Moore will emerge as true front-liners.  The prospect of hosting the All-Star Game has brought increased season ticket activity, a new scoreboard, and a palpable buzz in the local community of a resurgence in the post-Rick Nash era.   Nationwide’s commitment of $52.5 million for a 30% stake in the club, another $28.5 million over ten years for arena naming rights, and the restructuring of the Nationwide Arena ownership and lease situation have removed the economic burdens that have plagued the club since Year One.   All of these things provide cause for optimism, and are grist for an effective PR campaign, which has been urging fans to Join the Battle.  Unfortunately, due to the battle being waged between Messrs. Bettman and Fehr, those plans will remain tabled for the time being.

On the ice, the Springfield Falcons opened their AHL season at home on Saturday night, and posted a 4 – 2 win over St. Johns .  Matt Calvert, Dalton Smith, Tomas Kubalik and captain Ryan Craig each notched goals, and newly-acquired Tim Erixon had two assists.  On Sunday, the Falcons picked up where they left off, taking a 4 – 0 victory over the Adirondack Phantoms , with Craig notching another goal, joined by Johansen, Audy-Marchessault and Prout.  Atkinson had two assists, and Curtis McIlhenney, who was thought to be a mere accounting entry in the Vermette trade to Phoenix, has been in goal for both games, and obviously has been acquitting himself admirably, stopping all 31 the Phantoms fired in his direction.  Given last year’s horrific situation in goal for the organization — from both a performance and injury standpoint — this is potentially a bonus benefit.

The Blue Jackets stand to profit more than most organizations from the experience to be gained from playing nightly in the NHL Lite (AHL).  With the big club roster basically a blank slate waiting for players to claim slots, the experience to be gained is invaluable.  While in many years you could discount the value of AHL play as having much relevance to the NHL experience, such is not the case right now.  (By way of example, Brayden Schenn and Sean Couturier were both in the Adirondack lineup)  Add in the playing time that first round picks Boone Jenner and Ryan Murray are getting in juniors, the Blue Jackets are making the best of the labor strife in insuring that a signifcant portion of its roster will be ready when the puck finally drops in earnest.

As the Columbus Dispatch reported, former St. Louis Blues executive John Davidson is apparently squarely in the organization’s sights, and is in the midst of a weekend-long visit to Columbus, accompanied by his wife.  The sojourn is anticipated to include house-hunting explorations of local communities and substantive hockey discussions.  While Columbus has been widely known as a top contender in the race for Davidson’s services, and was the subject of recent conjecture over at Puck Daddy,  both the timing and the duration of the visit are noteworthy.   The recent influx of capital from Nationwide, as noted above, makes the Blue Jackets fully capable of meeting his contractual needs — perhaps uniquely so.  The challenge presented by the organization is precisely in Davidson’s wheelhouse, and (as Davidson himself has noted) Columbus really has a better talent pool than St. Louis did when Davidson appeared on the scene.  On the intangible front, Columbus represents the type of friendly, Midwest environment that Davidson has experienced at St. Louis.

What would Davidson bring to the organization?   Talent goes without saying — everyone familiar with his work lauds his ability to lead a hockey organization and steer personnel development.  While the Blue Jackets will certainly benefit from these attributes, in my view the more significant quality Davidson would bring is  . . .credibility.  Doug MacLean, who served as President, General Manager, periodic coach and full time carnival barker, lost credibility as time went on, as his evaluations of players were not supported by their performance.   His replacement as General Manager, Scott Howson, has represented a step too far in the opposite direction.  His administration has been characterized by an ultra-cautious approach designed to avoid disaster, but also ill-suited to taking advantage of opportunities when presented.  Howson’s sense of timing is suspect, and while most consider the return he received for Rick Nash to be adequate, his handling of the entire affair was — at best — clunky.  Howson unnecessarily escalated the entire affair at the trade deadline by throwing Nash under the bus, then alienated peers and fans alike through his protracted and painful process of marketing Nash’s services.

Davidson would provide that senior level of hockey management that the club has lacked since its 2000 debut.  Patrick is a savvy, sage voice, but has never been considered the long term solution.

He has no desire for a full-time position, and retains his Pittsburgh residence.  While I do not necessarily subscribe to the ABH (Anybody But Howson) school of thought, Howson’s credibility is seriously damaged, and he simply does not appear to have the tools to guide the hockey operations side of the business at a senior level.  Davidson has done this before, and whether or not Howson remains part of the organization, Davidson brings the specific attributes that the organization has needed for a long time.  He has demonstrated that he is a sound judge of talent, and can chart a long term course.  More importantly, he has shown that he can execute a plan.  His ascension would also enable club president Mike Priest to keep his focus on the financial side of the house –which even he admits is his strong suit.Will it happen?  Only a few people know at this point in time.  In a follow-up report ,  the Dispatch quotes Davidson as follows:

It was a good weekend.  My wife and I were treated very well.  All first class. No decisions yet, as this has been a whirlwind.  This will be an important decision for myself, my family and for the Blue Jackets. They have a great set-up there, and we were very impressed with the city.

Whatever the ultimate decision may be, it is a positive sign that the organization is taking material and decisive steps toward bringing Davidson on board.  In a time dominated by waiting, any action is a welcome sign.  We shall wait and see.