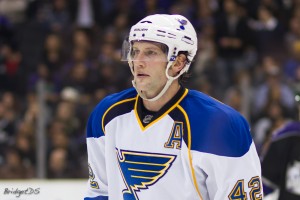 Backes scored his team-leading 24th goal of the season, but it wasn't enough as the Blues fell to Columbus, 5-2 (BridgetDS/Flickr)

If you walked into the St. Louis Blues locker room Saturday night, you would not have guessed that they had clinched the Central Division title just minutes after stepping off the ice.

Sounds of champagne bottles popping and music blaring over the loud speaker were nonexistent.  In fact, chills of deathly silence rang through the players, coaches and media.

The reason for this is because the Blues were not the ones who decided their fate that night.  Heading into their Saturday night matchup with the league-worst Columbus Blue Jackets, the Blues held the top-spot in the entire NHL and had the opportunity to clinch the Central Division title if they just recorded one point on the evening.  They could not find a way to beat 10-game veteran goaltender Allen York and fell to the Blue Jackets, 5-2.

Minutes after the Blues lowered their heads and slowly walked into the locker room, the Chicago Blackhawks defeated the Nashville Predators, who were the Central’s last hope of catching the Blues.  With the loss, Nashville was mathematically unable to gain as many points as the Blues, giving the St. Louis team the top-spot in the Central.

But the loss to the league’s worst team left a sour taste in the mouth of every member of the Blues organization.  There was no celebration in sight for the Blues.

Saturday’s contest saw eight power-plays given to the Columbus Blue Jackets, including a span of .39 seconds in the middle of the third period where the Blues took four penalties in a row.  This included a four-minute double-minor to Pietrangelo for roughing and unsportsmanlike conduct.  The Jackets scored just once in this span to extend their lead to 4-2, but it deflated the Blues’ hopes of a comeback.

“It seems in games like that, where we get really involved in the game physically, we seem to take the bad penalties,” forward Andy McDonald said.  “We play out of control and lose our positioning.”

Head Coach Ken Hitchcock was quick to defend the officials after the game, pointing blame at his team.

“The officials were not the issue; not one bit the issue,” he said.  “We were the issue.  The officials had nothing to do [with it].  They called what they saw.  What they saw was us taking stupid penalties.  I would have made the same calls.”

Penalties were not the only problem for St. Louis.  The passing and neutral zone play seemed out of sync for what the Blues have done this season.  This resulted in multiple turnovers, most notably on the Blue Jackets’ third goal, when Blues forward Chris Stewart turned the puck over at the top of the offensive zone.  Jackets’ forward R.J. Umberger stole Stewart’s pass and broke in on Halak one-on-one.  He beat him with a wrist shot, resulting in Stewart angrily slashing his stick over the post behind his goaltender.

“We were careless with the puck and made some careless decisions,” said forward Alex Steen.  “It wasn’t a very good performance.”

This loss came on the heels of a devastating 4-3 shootout loss to the Chicago Blackhawks two nights earlier.  If the Blues had won that game in regulation or in overtime, they could have clinched the division that night.  Halak made 37 saves on 40 shots, while the Blues only mustered 20 shots on goal, including just three shots in the second period.

“We were outplayed badly. I don’t even know how we got a point, to be honest with you,” Hitchcock said after the game. “We didn’t compete at a high level. It looked like we wanted the game to be easier.”

The Blues have three days between games, giving them time for team practices every day to help find what is currently missing; the drive to win.

“It’s almost like our focus has changed there for a little bit,” Captain David Backes said after Saturday’s loss.  “We played two games in a row now where we’re not playing the way we need to be successful.  We got to get that focus back so that every shift is going to be our next best one.  We can move on rather than thinking about what’s going on in a different building somewhere else that we can’t control.  That’s not the way that we’ve been doing it all year to be successful and that’s not the way that we need to be thinking.

“I think its guys committing to the team first mentality and going out there and executing a game plan.  We haven’t had that.”

It’s times like this that the Blues management will be relying on the veterans of the team to step up and teach the young guys how to bounce back.  Andy McDonald, a former Stanley Cup winner, will be one of the key players to get the young team ready for the rough waters ahead.  He was not keen on how the team looked Saturday night.

“Obviously, if we want to beat a good team, we can’t play like that,” McDonald said.  “That’s what the playoffs are going to be like.  It’s going to be a little chaotic at times and we have to find a way to tailor that emotion.  Tonight was a perfect example [of] getting really worked up about the officiating and the way that things were going and we weren’t able to reign it in.

“It spun out of control.  It lost us the game.”

The Blues will take on the Detroit Red Wings at Scottrade Center Wednesday night.  They play their final home game of the regular season Friday night against the Phoenix Coyotes before traveling to Dallas to take on the Stars Saturday night in the final game of the season.

The Blues have dropped to third overall in the NHL and second in the Western Conference.  Only the New York Rangers and Vancouver Canucks are atop the Blues in the standings, each holding a one-point lead over them.

“We’re going to have to right the ship in the next week,” said Backes.  “We’ve got some playoff teams coming up [and] we have to make sure to do the right things all night long.”