The prototypical Blues fan can speak up yet again.

Since Brett Hull left for the Dallas Stars during the summer of 1998, fans have been calling for a sniping forward that will come up with the big goal when needed.  The team cycled through the late Pavol Demitra, as well as 40-goal scorers Scott Young, Keith Tkachuk and Brad Boyes to fill the hole that Hull’s departure left.

Sure, the team found success in the early 2000s with a slew of forwards combining for magical seasons.  From a President’s Trophy victory in 2000 to the Blues’ first trip to the Western Conference Final in 15 years in 2001, the Blues always found ways to remain one of the most competitive teams in the league.

That is, one of the most competitive teams without a Stanley Cup.

After an uncharacteristic rebuild for the Blues that spanned from 2005 to 2011, the Blues have thrust themselves back into Stanley Cup discussion with a solid group of young athletes who play a very sophisticated two-way game.  Much like the Greek phalanx battle strategy, the system that the Blues have adopted, implemented by Head Coach Ken Hitchcock, calls for everyone to work together and contribute through all four lines and all three defensive pairings.

While this system has proven successful in getting the Blues to the playoffs and keeping them competitive in any physical series, it has not lifted them over hurdles in tight, low-scoring games.  For the system to truly work as a whole there needs to be a hero that emerges.

To put this into perspective, the Los Angeles Kings, the team that just eliminated the Blues from the Stanley Cup playoffs Friday night, run a similar system.  With a stingy defense, a steady goaltender and an abundance of back-checking forwards, the Kings wear teams down to a point where entering the zone is just as difficult as scoring a goal.  If you go into the corner with the puck, you are not likely to come out with it.

The Blues had two players score more than one goal in their six-game defeat at the hands of the Kings.  One of those players, T.J. Oshie, scored both of his goals in Game 4.  Because of his poor defensive play, Oshie discredited the goals and called the game one of the worst of his life.

Aside from Oshie and Alex Steen, the goals were few and far between by the rest of the Blues’ top offensive talent.  Patrik Berglund and Captain David Backes each had a goal.  Veteran Andy McDonald, crafty winger David Perron and regular season leading-scorer Chris Stewart combined for just three assists in the series.

Offensive blunders were constantly capped off by missed shots on net, hit posts and whiffed attempts. 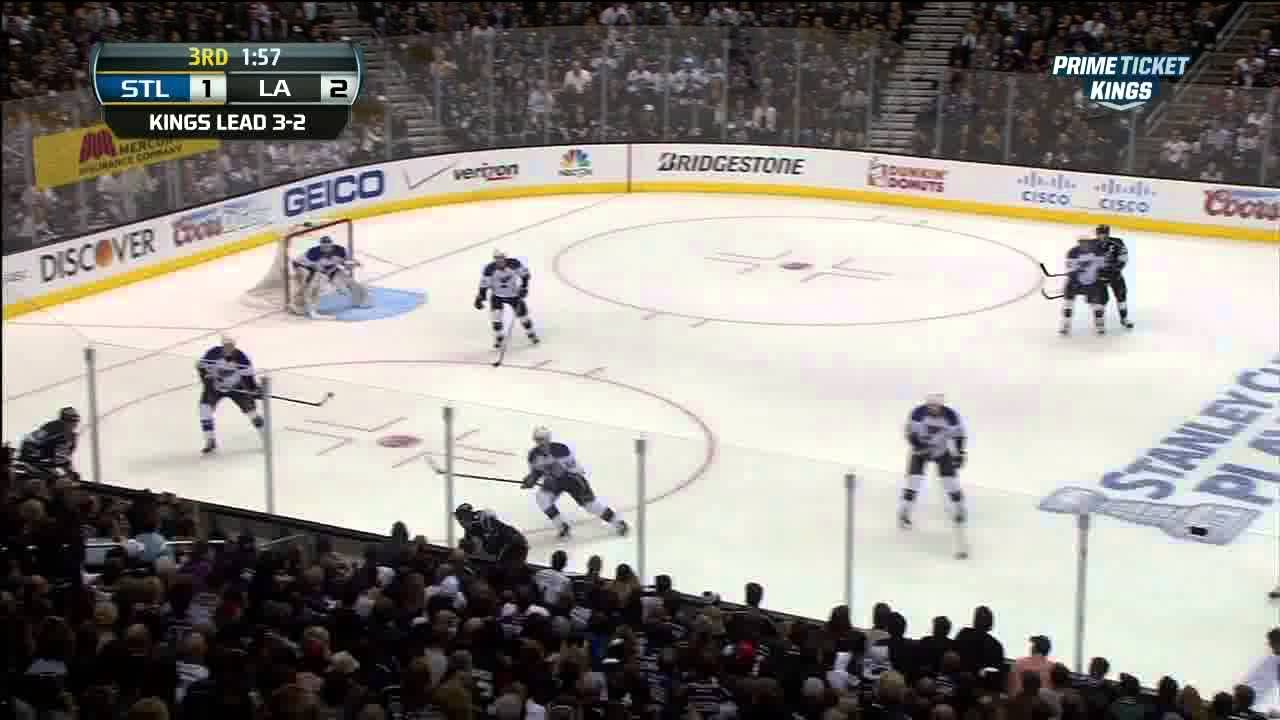 The Blues’ fourth line, appropriately named the CPR Line, was far and away the most active line in the series.  Consisting of Ryan Reaves, Chris Porter and Adam Cracknell, the fourth line was the only group that deserved constant attention in this series.  Even with Cracknell sitting out Game 4, each of these grinders ranked in the top-seven on the team in hits (a total of 64).  Besides rookie Vladimir Tarasenko who only played one game, the CPA Line featured three of the bottom four players for both teams in average time-on-ice in the series.  Yet, they were the most effective and most reliable throughout the six-game battle.

Porter was even the lone goal-scorer for the Blues in Game 6.

While I do not want to discredit an exceptional fourth line, it is hard to overlook the fact that the fourth line was the team’s best line.

Blues General Manager Doug Armstrong will have plenty to scratch his head about from now until the start of next season.  His acquisitions of defensemen Jay Bouwmeester and Jordan Leopold at the trade deadline certainly bolstered the Blues’ defense core, but the offense has plenty left to be desired.

Of the forwards, Andy McDonald will be the team’s most notable Unrestricted Free-Agent (UFA) while Patrik Berglund and Chris Stewart make up the top Restricted Free-Agents (RFAs).  After a dismal playoff for all three players, it will be interesting to see what they are offered from the organization… if anything at all.

In the meantime, Blues fans, it’s that time of year again.  Put the jerseys in the closet, take the flag down from outside the house and get to cheering on whoever is facing the Blackhawks.  It may hurt now but always remember that tomorrow will be better than today.

Say it with me: there is always next year.