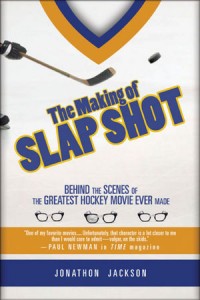 In The Making of Slap Shot: Behind the Scenes of the Greatest Hockey Movie Ever Made, Jonathon Jackson takes readers on the wild ride that was the creation and making of the movie Slap Shot.  As the dust jacket reports, Slap Shot was “a story too real and too good not to be true.”  And, since you are reading this review on The Hockey Writers, you probably agree that this movie achieved the distinction of being not only the greatest hockey movie ever made, but THE greatest SPORTS movie ever made.

The depth of Jackson’s research shows in the many interviews and anecdotes he provided throughout the narrative.  Taking on such a project must have been a bit daunting as many fans – both players and spectators alike – adore the film and often recite bits of dialogue, collect memorabilia, attend Hanson Brothers appearances, and watch the movie over and over again.  Not only a fan favorite, the movie’s stars fondly remembered filming.  Paul Newman once told Time magazine that it was one of his favorite movies, and Michael Ontkean contributed a foreword for the book.

That said, what can fans and novices glean from Jackson’s book?  Plenty, that’s for sure.  For those who missed it in 2008, he began the prologue with the text of a post from the New York Times hockey blog, “Slap Shot”: Hockey mourns the passing of Reggie Dunlop – a fitting tribute to actor Paul Newman upon his passing, plus screenwriter Nancy Dowd’s response to the obituary and her reiteration of “the immortal advice of Reggie Dunlop:  don’t ever play Lady of Spain again.”

Jackson interviewed both hockey players and actors involved in the movie.  Their behind-the-scenes stories are, as they say, “worth the price of admission.”   Fans of minor league professional hockey find tidbits of trivia connecting the movie back to their favorite teams of the 1960s and 1970s.  An example that immediately comes to mind:  Nancy Dowd based the character of Tim “Dr. Hook” McCracken on minor league player Ted McCaskill (who also skated in the film as one of the Binghamton Blades).  For fans of Nashville hockey, this brings a pleasant surprise in that one of their own can be tied to Slap Shot and hockey lore – McCaskill once played for the Nashville Dixie Flyers of the Eastern Hockey League (EHL) and achieved the distinction as one the team’s leading scorers during his tenure in the Music City.

Overall, Jackson’s book will not only jog many fans’ memories of the first time(s) they watched Slap Shot, but will also give them insight into what it was like to “be there.”  He included stories of Newman’s notorious on-set pranks and thoughts on Ontkean’s famous on-ice striptease scene.  The book provides readers with a fun ride through 1976 when Hollywood infiltrated Johnstown, Pennsylvania, and gave the rest of the world a glimpse into some of the reasons why hockey continues to endear so many fans throughout the years.

To paraphrase what Ontkean wrote in his foreward, the movie as well as the book is filled with “mischief, magic, monkey-business, [and] mayhem.”  And we hockey fans would not have it any other way.

The Making of Slap Shot: Amazon affiliate link (THW gets a small commission)