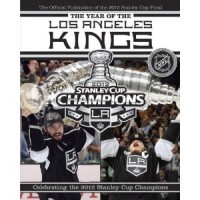 The Year of the Los Angeles Kings: Celebrating the 2012 Stanley Cup Champions

Forty-five years in the waiting, hockey fans in Los Angeles finally have something to celebrate.  Dustin Brown and Drew Doughty – with a little help from their friends, of course – have brought home the ultimate trophy in sports, The Stanley Cup.  And, every year, the NHL publishes a book that is “The Official Publication of [that year’s] Stanley Cup Final.”  This year, Brown and Doughty represented the Kings on the cover of Andrew Podnieks’s The Year of the LA Kings.

The book covered the Kings from the start in 1966.  To start, the team was introduced in a brief essay on “The Birth of the Los Angeles Kings,” highlighted by a photo of Terry Sawchuck in goal for LA (versus the Minnesota North Stars), then the story moved into the team’s two arenas.  Once the historical basis was set, Podnieks went directly into the details of the Kings’ 2011-12 season.

Divided into seven distinct sections, the book showcased everything from statistics to short player bios.  He started the season with training camp and worked through regular season and playoff statistics, explaining how the team was built and giving a page to the Kings’ farm club, the Manchester Monarchs.

Fans, especially, will enjoy re-living the playoffs with a game-by-game recap of each round.  From besting the Vancouver Canucks (where the crowd photos are sometimes quite amusing) to the final goal of LA’s 6-1 victory over the New Jersey Devils, readers will be taken through the ups and downs of the 20 games the team played this spring.  The text was limited, so the photography took center stage in telling the story.

Podnieks harkened the reader back to the last time the Kings reached the Stanley Cup Final in 1993 and discussed the “greatest comeback in Stanley Cup Playoff history,” The Miracle on Manchester.  A book about the LA Kings would be remiss without devoting some of the narrative to the acquisition of Wayne Gretzky in 1988, which included a photo of his 802nd career goal against the Canucks in 1994.

Yes, the book is formulaic.  You get exactly the same thing each year the book is published.  I reviewed the Blackhawks version for The Hockey Writers in March 2011 when I wrote:  “Overall, The Year of the Blackhawks was an adequate recap of the 2009-10 season, but disappointing for the long-time fan.  The reader was left with the feeling that all of the information could easily be found through other (free) sources.”

For the fans that have followed the Kings for many years, you will probably agree with my assessment of the Blackhawks book.  On the other hand, for those fans new to the team, it is a primer on the Kings (I’ll admit that I jumped on the Kings bandwagon during the Western Conference finals and rode it straight through to the Stanley Cup).  Since the Kings are relatively new to me, I found this edition more enjoyable than the one I previously reviewed.

Most die-hard Kings fans will probably do the same thing I did in 2010 – buy a few of the books available.  I do not regret purchasing the Blackhawks edition and Kings fans likely would not regret adding this one to their collection either.