That’s not to say that we think we’re better than anyone or that our opinion matters more, but as a society, we judge. It’s the nature of the beast and a big part of being a sports fan. From the comfort of our couches, seats and press box viewing areas, we have this unfair advantage to tell someone that they’re doing something wrong and be perfectly okay with saying it.

It’s a little much at times, but it’s expected. The players and the coaches get it and put up with it every day when they open up their favorite sports blog or read their favorite column on their iPad or Kindle. God forbid they see what’s being said on Twitter.

So here’s our contribution of guilt-free, good ol’ fashioned judging. The Boston Bruins started out the truncated 2013 NHL season with full marks. They’ve been very good but still have plenty more to show. What follows is a player-by-player midseason report card of the players and coaches, 24 games in.

Mike Miccoli: There’s a lot to like about Campbell’s game. To me, he’s the model of consistency and one of the most reliant players on the roster. He’s been flying under the radar, but that’s due to the revolving door of players he’d have for linemates due to injuries. Still, there’s more to come from Campbell. Grade: B

MM: I’m enjoying watching Lucic play this season, even if he’s having a hard time putting up goals. He’s making his presence known on the ice (albeit losing his temper all of the time) and making some downright filthy passes, no doubt leading to the point surge from David Krejci. The goals will come. Grade: B+

WW: Four goals in 23 games isn’t exactly what you’d expect from the former 30-goal scorer, but he’s been piling up the assists thanks to an apparent improvement in his passing game. However, you’d like to see more consistency from the 25 year old. Grade: B 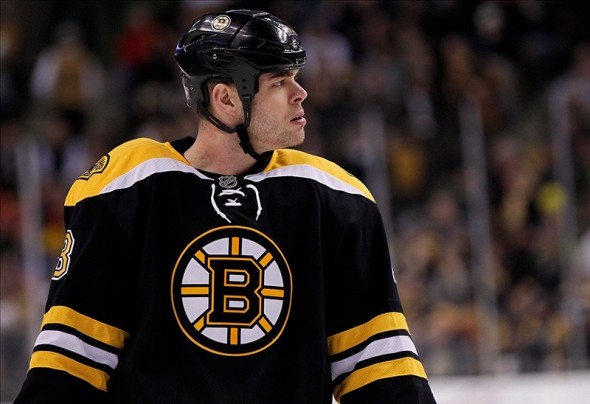 MM: Every time I think Horton is about to go on a tear, he tends to taper off. Still, it’s nice to see him contributing, especially with a new contract due at the end of the season. Grade: B+

WW: After missing almost a full calendar year due to a second major concussion in a seven-month period, Horton doesn’t appear to be shying away from the physical game, and could be gearing up to hit his stride just in time for the post-season. Grade: B

MM: This will probably sound foolish, but I was never worried about Seguin’s lack of production. His two-way game has improved and his hockey IQ continues to rise meteorically. Now, he’s becoming an offensive powerhouse once again, all while turning into the beating heart of the Bruins’ anemic power play. Grade: A-

WW: Sure there was a slow start, but Seguin is starting to rack up the points (20 points in 24 games played), and his game is becoming more complete. Still, one can’t help but feel there’s more in the tank than what Seguin’s shown thus far. Grade: B+

MM: Paille will never be a top-six forward, but he’s been an asset to jump-start the production for both the third and fourth lines this season. In what is (in my opinion) Paille’s best year yet with the Bruins, he’s made sharp looks in the neutral zone (!), been one of the best penalty killers on the team (!!) and he’s been able to convert on breakaways (!!!). Did I just give Daniel Paille one of the highest grades on the team? You bet your ass I did. Grade: A-

WW: This says it all: nine points in 21 games and Paille continues to be the Bruins most consistent penalty killer. Grade: B+

MM: The somewhat decent numbers are lying to you; this hasn’t been a good year for Ference. We could very well see a situation where Ference is re-signed based on his positive off-the-ice efforts. While that’s okay with me, it’s not going to be okay for others. Grade: C

WW: If Ference is trying to prove his case for a new contract extension, he’s got some work to do. Grade C

MM: Thornton hasn’t been as big of a factor as season’s past, but you could make an argument that the hyped “The Bruins are 100-0 when Thornton fights” theory plays a tiny part in that. It’s been an average year for Thornton where he hasn’t been awful, but hasn’t stuck out much either. Grade: B-

WW: At this stage in his career, Thornton is more important to the Bruins for his off-ice leadership than his on ice performance. Grade: B-

MM: He might be turning a corner now, but Kelly’s first half of the season has been brutal, ending with a harsh knee-on-knee hit from Chris Neil. I can live with Kelly’s production totals from last year being a fluke, just as long as his outstanding two-way game wasn’t. If it was, it’s going to be a long three years. Grade: C-

WW: Coming off of a 20 goal season, it would have been hard for Kelly to repeat the offensive output he enjoyed last year. However, he’s struggled to find his defensive game as well, and sits at a -6 in the plus/minus category. For comparison’s sake, last season he was a +33. Grade: C- 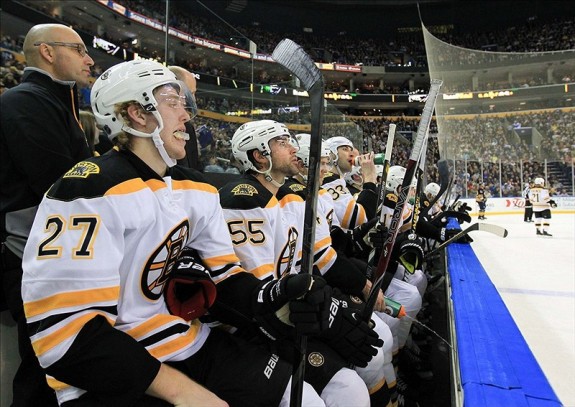 MM: Is Dougie Hamilton that elusive puck-moving defenseman for the Bruins? Almost. Problem is, he’s had a few lapses in his defensive game. Still, it’s been expected for the poised 19-year old rookie (quotas met) who has been a welcomed addition to the blue line this season. Grade: B+

WW: Despite the few and far between rookie mistakes, Hamilton has been everything he was hyped up to be. You know, 19-year old defensemen aren’t supposed to be this good in the NHL. Grade: B+

MM: There have been a few, uncharacteristic missteps in Chara’s defensive game this season but there’s no doubt he’s still one of the best d-men in the NHL. Grade: B+

WW: The Bruins have seen a world without Zdeno Chara, after the captain took 17 minutes worth of penalties in Boston’s last game against Montreal, and it wasn’t pretty. Chara continues to be backbone of Boston’s blue line. Grade: A-

MM: Khudobin has embraced the backup role and has done a pretty good job at it. Would I trust him if Rask went down? I don’t know. Grade: B+

WW: Both Rask and Khudobin are in the last year of their contract with Boston. Rask will be re-signed, but Khudobin may be playing so well he’ll price himself out of the Bruins roster next season. Grade: A

MM: Patrice Bergeron is no longer underrated and is officially the best center on the Bruins roster. Want to teach a kid how to play hockey? Have him watch Bergeron for 60 minutes; the best all-around forward and best role model on the team. Grade: A

WW: The heart and soul of the Boston Bruins continues to be the most consistent player night in and night out. He’s a top 10 center in the league, and his solid two-way play is showing up on the scoresheet as well. Leading the team in points and +/-. Grade: A+

MM: Rask has propelled himself as a top five goalie in the NHL in the first half of the season. If he keeps his numbers up, he should be a lock for a Vezina Trophy nomination. Though I’d guess he’d want another trophy a little bit more. Grade: A-

WW: The “goalie of the future” is officially the goalie of the present. Rask has been rock solid between the pipes for Boston. The question is whether or not he’ll be able to maintain this performance as the season (and postseason) stretches on. Grade: A-

MM: Seidenberg has been solid throughout the season so far. He’s turning out to be the perfect defensive partner for Hamilton who should no doubt attempt to emulate Seidenberg’s play. Grade: B+

WW: The best bargain on the Bruins roster. Two years left on a cap-friendly deal with an annual cap hit of $3.25 million, and then the German defenseman could be looking for a big raise. Grade: B

MM: Krejci finally stepped up and embraced the role as the top center of the Bruins on paper. Yet even after all of that, he’s still not the best center on the team. That says something. Grade: B+

WW: Coming off of an inconsistent season last year, Krejci has brushed off trade rumors and reclaimed his 2010-2011 form. Grade: A-

MM: There’s been plenty of potential for Bourque to be something in Boston, but it just didn’t work. Grade: D

WW: Sorry, Chris. It just doesn’t look like the career AHLer can cut it in the big leagues in a bottom six role. Grade: D

MM: Peverley’s had some great games but they have been few and far in between. When healthy, Peverley was billed to be a 20-goal scorer and a borderline top-six forward who can slide up or down the lineup at a moment’s notice. Not thus far. Grade: C-

WW: When the Bruins re-signed Peverley to a three year deal with an annual cap hit of $3.25 million, they categorized him as a top six forward. So far this season, #49 has not lived up to expectations. He’s at a team worst -8, and while some of his game has been stricken by bad luck, the winger has clearly been lacking confidence as well. Grade: C-

MM: McQuaid has had an on and off year, sometimes looking like a solid fixture on the third pair while other times it looked like he was destined to be a healthy scratch. Hard to really get a gauge on his year so far. Grade: B-

WW: If the Bruins are looking to improve their defense at the trade deadline, McQuaid could net a good return if he’s part of a package deal. Grade: B-

MM: No one has flown under the radar this season more than Johnny Boychuk. His bone crushing hits are still there, as is his solid work on the penalty kill, but there have been far less “Johnny Rockets” from the point than we’re used to seeing. Grade: B

WW: Boychuk continues to be a solid defenseman for the Bruins, but his reasonable cap hit could make him trade bait. Grade: B 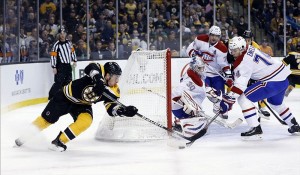 MM: Marchand has been on fire for the Bruins and continues to irritate opponents. He’s controlled his temper so far this season with only five minor penalties and has been able to focus more on his offensive game. Boston says thanks. Grade: A

WW: At some point this season I’m sure Marchand’s shooting percentage will permanently drop below the 30% area, but for now he’s just enjoying the ride. The third year winger is tied with Sidney Crosby (among others) for the 12th best goal scorer in the league. Grade: A-

MM: There have been some eyebrow raising games for me, when I wonder where the Bruins’ lead goes or why they stopped playing the full-60 minutes. But at the end of the day, I look at the overall record, make-up of the team and chemistry and put my faith in Claude Julien who just became tied for 2nd in all-time wins for a head coach with the Bruins. Grade: B+

WW: There have been some uncharacteristic defensive lapses, and blown leads so far this season, but that has less to do with Julien’s system and more to do with the players. The power play continues to show signs of improvement, but still sits at 22nd in the league. Grade: B