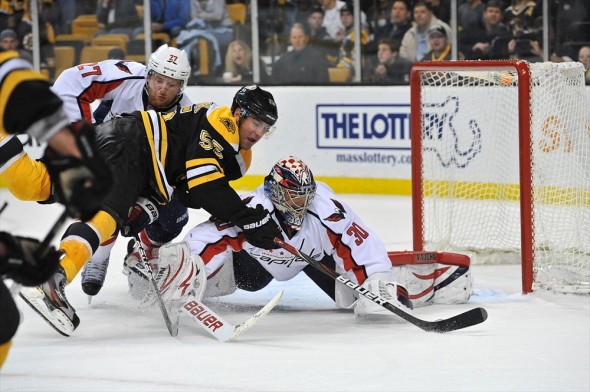 Thanks to Sid the Kid and the Pens, the Boston Bruins clinched a spot in the Stanley Cup playoffs Friday night. The Sabres loss to Pittsburgh at home sealed the deal and put the B’s back into the postseason for the fifth straight year.

The B’s still haven’t sewn up the Northeast Division crown but can do so Saturday afternoon if two things happen:

1. The Bruins need a win against the New York Islanders in regulation or overtime (not via a shootout), and…

2. The B’s need the Ottawa Senators to fall to the Philadelphia Flyers in regulation.

This scenario would put the Bruins up eight points on the Sens with Ottawa having just four games remaining – meaning a virtual tie is all that the Senators could hope for. Additionally, the win in regulation would give the B’s 38 regulation plus overtime wins (ROW) to Ottawa’s 34, meaning even if the Sens managed to win every single remaining game in regulation (with the B’s losing-out), they’d finish the season even in points and ROW’s.

As a result, the first two tiebreakers (ROWs and same games/points) would not resolve the tie between the squads … pushing the NHL to its third tiebreaker: Versus record. The Bruins already won the season-series (with eight points and a 4-1-0 record in five games with one to go), so they would handily take this tiebreaker. As a result, the Bruins would win the division for the second consecutive season (and third time in four years), and secure either the second or third seed in the Eastern Conference.

Furthermore, the B’s can follow that up on Sunday by clinching the Eastern Conference’s second-overall seed. Because the Bruins are assured the ROW-tiebreaker over Florida, any end-of-season tie between the clubs goes to the Bruins.

If (following a Saturday win and Sens’ loss) the B’s beat the Rangers, they’d clinch the number-two spot. However, if they lost in overtime – they would need a Panthers loss or overtime loss against Detroit to secure the East’s second slot. If (again, after a win against the Isles and Sens’ loss on Sat.) the B’s failed to grab a point against the Rags they could still clinch if the Cats lost to the Wings in regulation.

Even if the Bruins fail to lock-up the division or second-seed this weekend,  one should expect the B’s secure both by season’s end. This will likely result in a first-round series against the Senators (almost a three-in-four probability, according to Sports Club Stats) though the Capitals appear to have surpassed the Devils as the second-likeliest option.

Adam McQuaid is out after being on the receiving end of a nasty charge from the Washington Capitals’ Jason Chimera in Thursday night’s action. His eye has closed but it appears he avoided a concussion in the incident – much to the relief of B’s fans. McQuaid didn’t make the trip to New York.

Despite receiving a five-minute major for the hit and a game misconduct, Chimera avoided supplementary discipline.

With McQuaid (currently fifth on the depth chart) out, the Bruins’ defensive depth is being tested: The much-maligned Joe Corvo was already in for Dennis Seidenberg (who was out Thursday because of an infection caused by a cut on his left leg) and Mike Mottau, the B’s eighth defenseman, may see time as a result. Seidenberg is reportedly recovering well and may be available this weekend. 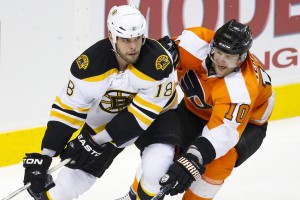 There was some more bad news for the Black and Gold on Tuedsay as Joe Haggerty of CSNNE reported that a source “close to [Nathan] Horton” informed him that the concussed winger “… [won’t be returning] anytime soon…”  Later, Haggerty inferred that while there hadn’t been talks of officially shutting Horton down for the year, that it was all but a foregone conclusion.

The B’s recent resurgence notwithstanding, this is a real kick below the belt. Horton was having a very solid season (on pace for thirty goals and just under sixty points) when a late hit by the Flyers’ Tom Sestito gave him a concussion in late January. He’s missed more than thirty games as a result.

While the thought of losing Horton for the rest of the season almost seemed like a death-sentence for the club during their weeks of stumbling through February and early March – the play of youngster Jordan Caron and Brian Rolston (plus the return of Rich Peverley) has once again given the B’s the scoring depth that made them so deadly in November and December.

Horton will still be missed if indeed he is going to be sidelined for the duration of the season. However, the B’s should still be able to field a top contending forward corps if Caron, Rolston, Peverley and the rest of the depth forwards continue to contribute.

While no player would likely admit it, the Bruins are likely looking past their lottery-bound Saturday opponents to the East’s top team, the New York Rangers. The Rangers won the first  three matchups between the squads this season, including a last-second overtime win in January, a disheartening shutout (42 shots against) on Valentine’s Day, and a third-period winner in the first week of March.

The B’s have mustered just six goals in the three games despite outshooting the Blueshirts by a 109-to-70 margin. Henrik Lundqvist has accrued a .945 Sv% against the Black and Gold this season including one of his eight shutouts.

Part of Boston’s struggles against the Rags can be attributed to their simultaneous problems with teams as a whole: From their first game against the Rangers until their recent successful six-game stretch the Bruins were an uninspired 10-14-2.

Additionally, the Rangers would be hard-pressed to say they dominated – or even were the better team in all (perhaps even most) of the 184+ minutes of action between the clubs this season. It wouldn’t be far from the truth to say that aside from finishing (and in net) the Bruins were the better squad for those three contests.

Of course, all that matters in the end are the wins and points – and the Rags came away smiling with six points compared to the B’s one. Those victories catapulted them into first in the East and have them very close to home-ice throughout the conference playoffs and on the verge of the Presidents’ Trophy.

Boston needs to take at least this one game against the Rangers – more for the Bruins’ psyches going into the postseason than anything else. A win at Madison Square Garden would go a long way toward proving to themselves that – once again – they are an elite squad and capable of outduelling any team in the land.