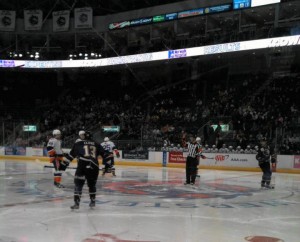 On Friday, January 4, the Springfield Falcons took down the Bridgeport Sound Tigers 5-4. Sound Tigers’ Matt Donovan started off the scoring, but it was soon followed by two Falcons goals scored by Michael Chaput and Jonathan Audy-Marchessault to give their team the lead. Nino Niedereitter scored off a Donovan deflection to even the score. The Falcons netted two more goals before the end of the first period to go up 4-2. A busy first period was followed by a lull in scoring in the second, and John Persson was the only player to score, reducing the Falcons’ lead to one. Springfield’s Nick Drazenovic’s shot deflected past Bridgeport goalie Kevin Poulin to go up 5-3 in the third. Persson scored his second goal of the night with 4:33 left in regulation, and the Sound Tigers had a few opportunities to tie the score but couldn’t get it done.  Only 1-5 on the power play, the Sound Tigers struggled to score on the man advantage, including a 5-4 chance with a few minutes left to play.

Sound Tigers were trailing Portland early Saturday, January 5 after a shot and score by the Pirates’ Captain, Alexandre Bolduc. Both teams came out with a lot of energy, and Sound Tigers Brett Gallant and Nathan McIver both dropped their gloves to brawl in the first period. With 4:31 left in the first, Andy Miele scored on the power play to go up two. Portland goalie Mark Visentin denied a breakaway attempt by Blair Riley, but Riley came back down and scored on his next try to make it 2-1. The second and third periods were highlighted by a couple of big hits by Portland, but neither team scored a goal. Visentin’s stellar play in the crease was the deciding factor of the game.

On Tuesday, January 8, Bridgeport dropped a tough one in overtime to the Hershey Bears. The Sound Tigers got on the board first from a Johan Sundstrom deflection into goal, but goalie Kevin Poulin was unable to stop Ryan Stoa and Tomas Kundratek from scoring for the Bears to go up 2-1. Colin McDonald was able to tie up the score before the opening period ended. Brandon DeFazio scored in the third to regain the lead, but the Bears’ Evan Barlow found the net to tie it up again and bring the game into overtime. Kundratek scored his second goal of the night to help his team win 4-3.

Providence got off to a paralyzing start Friday, January 11, scoring five goals before the Sound Tigers were able to shake the shutout and rally a comeback effort. Christian Hanson, Torey Krug, and Craig Cunningham all scored in the opening period for the Bruins. Pressure was kept on goalie Anders Nilsson in the second with another Cunningham goal and a wrist shot by Tommy Cross to go up 5-0. The Sound Tigers woke up in the third period and amassed four goals to make the game exciting. Defenseman Travis Hamonic scored his first goal in a while after being out since early December. Aaron Ness recorded a goal to make the score 5-2 midway through the third. David Ullstrom and Johan Sundstrom also scored to make the score 4-5, bringing their team within one goal of the Bruins. With only two minutes left, though, the Bruins were able to hang on and defeat the Sound Tigers.

The Sound Tigers lost their fifth game in a row after dropping one to the Portland Pirates Saturday, January 12. The Sound Tigers took an early 2-0 lead with goals by Casey Cizikas and Blair Riley. The Pirates scored three goals before the Sound Tigers’ Matt Watkins tied up the game. The Pirates’s momentum continued, though, and led to three more goals to win 6-3.

The Sound Tigers recorded a win on Sunday, January 13 against the Albany Devils to break a five game winless streak. Aaron Ness scored on the power play to give the Sound Tigers a lead 11:39 into the first period. Albany was able to get on the board before the end of the first with a goal by Phil DeSimone. Bridgeport’s Nino Niedereitter scored in the second but Albany again tied the score after Kelly Zajac scored on Poulin off a deflection. In the third period, Blair Riley and Niedereitter scored to go up 4-2, but allowed Albany to tie up the score with two goals, by Joe Whitney and Chris McKelvie, within 92 seconds. With time expiring, the Sound Tigers took advantage of a man advantage and Matt Donovan found the back of the net to win the game 5-4. Bridgeport’s Chad Costello, who recently agreed to a one year deal with the Sound Tigers, tallied three assists in the win.

One of the keys to Sound Tigers success will be mental toughness. Playing so many games, it’s not unusual for teams to go through slumps. The Sound Tigers need to be able to recover from their losses. The Sound Tigers also need to stay out of the box and play at even strength. Bridgeport is one of the top teams in penalty minutes but struggles on the penalty kill, and this combination will continue to hurt the team. The Sound Tigers remain in second place in the Northeast Division while dropping to the eighth spot in the Eastern Conference.

Riley has struggled to score this season. He has created opportunities for himself, but hasn’t had luck finding the back of the net. The sound of the puck hitting metal must have haunted Riley’s dreams. It was only a matter of time before hard work started to pay off. On January 5, Riley recorded his first goal of the season against Portland. In the third period, Riley’s breakaway shot on goal was denied by goalie Mark Visentin, but the Sound Tigers recovered the puck and Riley scored on his next attempt. After getting the first goal of the season out of the way, Riley has been impressive in his follow-up performances. He has had a goal in three of his last five games, scoring in both games against Portland, and the game vs. Albany.

DeFazio has had a hot stick lately, helping his teammates score and finding the back of the net himself over the past couple weeks. He found Riley for his first score of the season against Portland earlier in January. He used his strength against the Bears to force the puck into the net in an overtime loss. DeFazio has seven goals and seven assists this season, with a total of 14 points.

The Sound Tigers found themselves in a five game winless streak when they laced up against the Albany Devils on Sunday, January 13. Bridgeport and Albany exchanged goals throughout the game, and with only a few minutes left in regulation, the score was tied up at 4 when the Devils were called for goaltender interference. Throughout the season, the Sound Tigers were one of the top teams on the power play, but as of late, they were 1-13 on the man advantage. Matt Donovan sent a shot toward the goal with 1:16 left and Albany goalie, Keith Kinkaid, was unable to stop it.

Just as soon as he returned to the lineup, Travis Hamonic is gone again. With the lockout lifted and teams trying to strengthen their rosters, AHL players are being recalled to their NHL teams. The Islanders recalled six studs from the Sound Tigers to join training camp. The Sound Tigers will miss the consistency and physicality of defenseman Travis Hamonic, Jon Landry and Ty Wishart. They will also lose several play-makers and top scorers in forwards Casey Cizikas, Colin McDonald, and David Ullstrom. It seemed too good to be true that the Baby Isles would have a full season with NHL-level players. The Sound Tigers have a deep roster filled with young talent, though, so it will be interesting to see how the losses will affect the team.