• 110 most regular season shutouts and counting

The numbers go on and on, much like the arguments about whether or not Brodeur is the best of all-time.  One thing is for sure: he is the best of our time.

Martin Pierre Brodeur was born May 6, 1972, in St. Leonard, a suburb of Montreal, one of five children whose father, Denis, was a successful Olympic goaltender and accomplished sports photographer.  Denis was the official lens man for the Montreal Canadiens, attending all games and practices for over twenty years.  It was there, in the hallowed halls of the Montreal Forum, that Martin acquired his early knowledge of the game following the exploits of those great Canadiens teams.  In time, he became a student of the game and, today, is a walking encyclopedia of NHL history.

There were two important influences in Marty’s early hockey life. 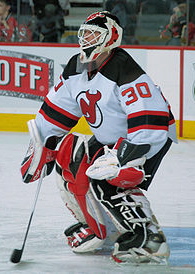 The first was at age thirteen when he attended two different goaltending schools, one run by Francois Allaire, the Quebec goalie guru, and the other by the Russian superstar Vladislav Tretiak.  The two popular goaling styles were featured giving Marty a clear choice. The first, the butterfly style being taught at the Allaire School, was modeled on the play of Marty’s boyhood hero Patrick Roy.  Marty spent one week at the school and hated it, feeling that a system built on playing the percentages with every move planned would cramp his personal approach to the game and not allow him the creativity he enjoyed to that point in his career.  Moving on to the Tretiak school he found his own personal nirvana.  Tretiak taught a combination of several styles that called on the goalie to pokecheck, stack the pads and play the puck behind the net.  With his outstanding athleticism Marty embraced the Russian’s thinking and spent four years at the school, three as an instructor.  His style evolved into a winning combination of both schools.  His one-legged butterfly while half-standing allows him to recover quickly for the next save or to protect the upper part of the cage with either hand.

The second was the night his father arrived home from a Flyers game after witnessing the play of Ron Hextall for the first time and told him he needed to watch the way he played the puck frequently and acted like a third defenseman.  Hextall played the puck aggressively and creatively and Brodeur was inspired to follow that path in his game.  Marty mastered the shooting, stickhandling and passing parts of the game so well that the NHL in 2005 instituted the trapezoid, an area behind the net outside of which the goalies cannot play the puck behind the net.  Aimed directly at the Devils goalie it has become known around the league as the Brodeur Rule.

After a successful midget career in his home-town, where the local arena now bears his name, Marty played for the Saint-Hyacinthe Laser in the Quebec Major Junior League where he was drafted by the New Jersey Devils in the first round (twentieth overall) in the 1990 NHL Entry Draft.  A teammate introduced him to a local beauty and in 1995 Marty married Melanie Dubois. Together they had four children: Anthony (1995), Jeremy and William (twins 1996) and Annabelle (2002).  In 2003, the couple divorced with rumors swirling about an affair between Marty and Genevieve Nault, the wife of Melanie’s brother.  Brodeur and Nault married in June 2008 and their first child, Maxime, was born in November 2009.

In the 1993-1994 Brodeur played his first full season for the Devils, leading them to their first Eastern Conference Finals where they lost to their archrivals, the New York Rangers.  His arrival started a renaissance for the team that would culminate the following season with a Stanley cup win over the highly favored Detroit Red Wings, with Marty giving up only seven goals in the four-game sweep.  Brodeur started then to write his name in the NHL history books and has never looked back since.

The most important influence in his current career life has been Lou Lamoriello, the astute general manager of the Devils.  Several years ago Marty decided to negotiate his own deals starting with his hockey team.  Along with Scott Stevens he signed for compensation well below his worth so that the team would have extra money to spend buying talent that could lead them to more Stanley Cups.  The concept worked and Lamoriello was able to craft a competitive team bringing home two more Cups in 2000 and 2003.  Marty has since continued that pact, signing in 2008 for $5.2 million a year, extending his contract until 2012 when he will be forty years old..  He is a team player and acts accordingly.  His conduct proves that he does not just talk the talk but that he also walks the walk.

His autobiography, Brodeur: Beyond the Crease co-authored with Damien Cox, is a brilliant look into the mind of this amazing athlete.  To this day Marty’s acrobatic saves, on-the-tape passes from his crease to the opponent’s blueline, spectacular glove work and brilliant positioning in the net, continue to amaze and astound the opposition’s shooters.  “ You never know what he is going to do next,” is the comment most heard by those scratching their heads after being stiffed one-on-one.  As a season ticket holder, I have had the pleasure of watching him for the entire seventeen years he has spent in the Devils’ cage.

Despite his ascent to superstardom in his chosen profession and the universal acclaim for his prowess, Marty Brodeur has maintained his humility and his total lack of pretension.  He always has time for a kid who wants to pose beside him for a souvenir picture or to sign any autograph any fan wants.  Through it all he has kept those boyhood friends he made back in Saint Leonard. After each Stanley Cup win he has hosted a street hockey tournament with all his buddies where the real winner of the Stanley Cup is decided.