The Boston Bruins find themselves in familiar yet altogether foreign territory heading into Game 6 of the Stanley Cup Final. One on hand, they face the task of holding serve on home ice in order to push the series to a deciding 7th game, a situation that has a distinct 2011 feel to it.

At the same time, the 2013 version of this team now finds themselves trailing a series for the first time in this year’s playoffs, and will be playing in their first non-Game 7 elimination match.

It all adds up to one (or two) last gasp(s) for the Bruins, who might just have to do it without one of their most important players going forward.

With all the talk of Corey Crawford’s shaky glove heading after Game 4, the Bruins made it relatively easy on him to temper that narrative in Game 5. Boston fired 25 shots on net, and did little to counteract the continued breakout of Patrick Kane, who potted 2 goals and had several other fine chances along the way.

Oddly enough, it was only after it was clear that Patrice Bergeron wouldn’t be returning to the game that the Bruins began to turn it on. David Krejci fed a hungry Zdeno Chara with a nifty feed from behind the net in the 3rd to make it 2-1, and it seemed as though these two teams were heading to yet another OT.

That kind of magic was isn’t in those cards, however, and David Bolland’s empty netter late in the 3rd iced it for the Blackhawks.

The big story on the night was the absence of Bergeron, who played only 11 shifts in 6:06 of ice time. After seeing limited ice time in the 2nd, information on his status began to trickle out on via CBC:

As @ScottOake just reported. P. Bergeron had a stretcher waiting for him but he didn't use it. Walked to the ambulance on his own. #CBC

After the game, the speculation was that he had suffered a spleen injury, courtesy of this tweet:

According to the Bruins twitter feed, Bergeron was discharged from the hospital and was flying home with his teammates on Sunday, which is encouraging. It makes you wonder whether Claude Julien knew about his condition prior to the game, prompting the insertion of Carl Soderberg and his C exoperience into the lineup. The Swede looked good in his first NHL playoff game, but obviously if Bergeron were to miss the rest of the series, it would be a serious dent in the Bruins chances at making a Cup Final comeback.

Claude Julien: Patrice Bergeron is day to day with a body injury. "Day to day is really good news to me, anyway."

Also sounds like it could be a kidney issues, but nobody really knows for sure at this point.

The other big story from Game 5 was the following hit delivered by Johnny Boychuk on Jonathan Toews: 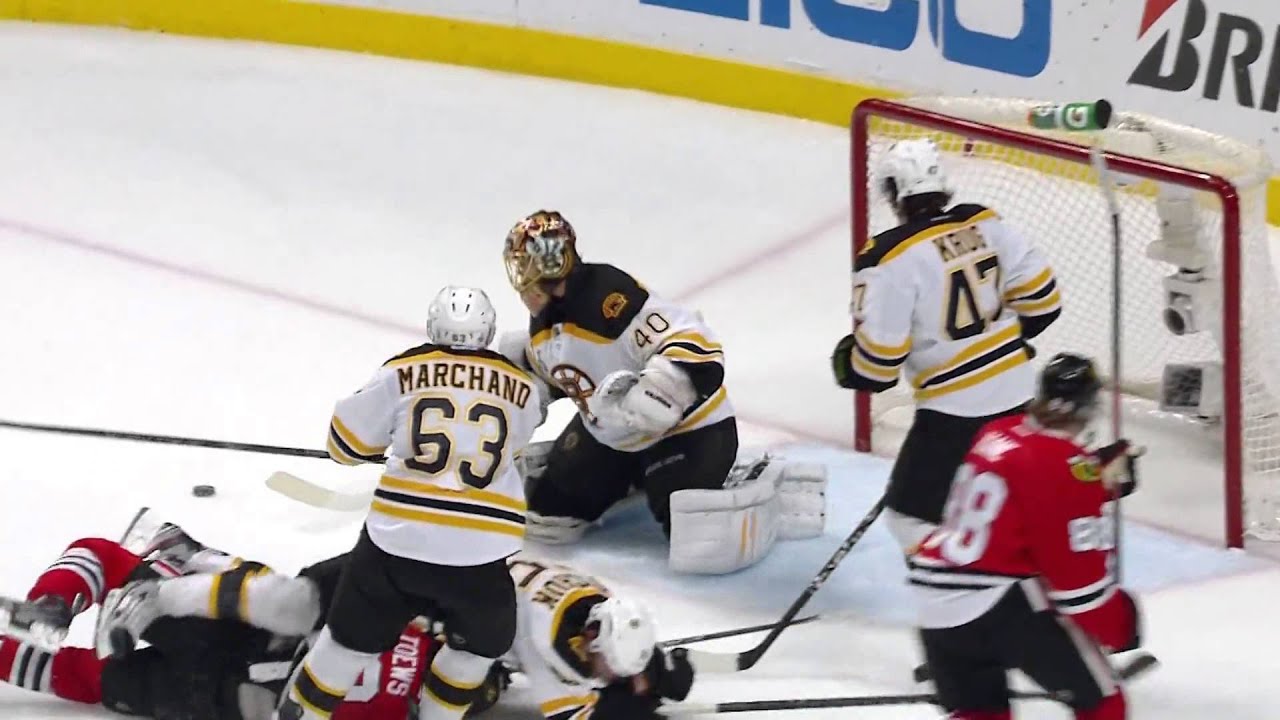 While much of the attention was on Bergeron being forced out of action, people slowly began to notice that Toews also wasn’t seeing much ice time. Visible on the bench, Toews did not see the ice at all in the 3rd, most likely as a result of the effects of the hit from Boychuk. The initial and ongoing outcry was for a suspension, but on Sunday morning, it was confirmed that there would be no supplemental discipline.

As expected, no supplemental discipline for BOS's Boychuk.

This definitely seems like the right call to make, if only because of how the NHL rule is written. According to Rule 48, a hit to head is illegal when “the head is targeted and (is) the principal point of contact.” Based on a simple screen grab, it’s easy to see that Toews’ shoulder was the initial if not principal point of contact, indicating that the head was indeed not targeted.  The easiest comparable is the Rick Nash hit on Tomas Kopecky during the regular season, which also did not result in a suspension.

Having said all that, there appears to have been enough head contact to warrant a Toews benching (which begs the question as to why he was actually on the bench if he was unable to play due to a blow to the head.) Nevertheless, Joel Quenneville seems hopeful that Toews will be able to play in Game 6,.

BUT, if he is unable to go, it would certainly make things easier on a Bruins team that might be without their own Selke winner.

So here’s where the Bruins now stand, in context. Saturday night’s loss was their first in regulation since May 12th against the Toronto Maple Leafs. The following night, they stared down a late 4-1 deficit and rallied to win that game in overtime, on the back of some serious heroics from Bergeron. They’ve lost 4 games total since then, 3 of which were in OT.

In short, the Bruins have been playing some REALLY good hockey lately, and shouldn’t be counted out just yet.

What might help is a bit of secondary scoring. Few would have believed that the Bruins would be this close to the Cup with 1 combined goal between Tyler Seguin and Jaromir Jagr, and there’s really no time like the present for one or both of these guys to find the back of the net. Combine that with a renewed focus on D, continued solid play from Tuukka Rask, and a first line that does what a first line should do, and a Bruins win on Wednesday is still very much a possibility.

Yes, many in the doom and gloom camp were pointing out ad nauseum that the 2013 Chicago Blackhawks are not the 2011 Vancouver Canucks, which is true. But it’s also true that the 2013 Bruins are not the 2011 Bruins, and they have that Cup Final comeback and the big win over the Leafs to draw upon. The reality is that until Gary Bettman is booed before handing the Cup to the winning captain, no Final is truly over. After the Bruins seemed so painfully done on May 13th, they’ve accomplished a lot by turning things around; through 5 games, they’re right there with the top team in the league from the very beginning of 2013, with an eventual victory still in sight.

We shall see on Monday if these Bruins are up to the task. Based on the way the series has gone so far, a Game 7 between these two teams (ideally with both Toews and Bergeron in the lineup) would certainly be a welcome treat for all hockey fans.