For all intents and purposes, Matthew Tkachuk has come in with the Calgary Flames and made a positive impact. Through this time, we see some issues with his game, but these are largely outweighed by the absolute positives.

In terms of possession metrics, Tkachuk is a darling — something the Flames have been longing for in their middle-six for the last few years. Perhaps the most startling realization is that he specializes in turning defensive zone starts into positive offensive action.

Through his eight-game stint with the Flames, Tkachuk starts in the defensive zone an exorbitant 74.1% of the time and carries a 58.0 CF% (Corsi For Percentage).

CGY is at 10 games now, so what we’re seeing is starting to be fairly solid. pic.twitter.com/5DeMrNpeF2

The edge Tkachuk plays with brings a valuable asset to the Flames lineup as the tenacity and finesse shows that his skill-ceiling may, in fact, be higher than originally anticipated. Through the years, it’s easy to discern between NHL regulars and borderline NHLers based on the quality of their two-way game. In this regard, I feel Tkachuk has shown that he is wise beyond his years.

Though it could be argued that the amount of penalties he has amassed could be seen as a negative, these are a by-product of his style of hockey. This problem has been addressed in some way, as head coach Glen Gulutzan sat forwards Sam Bennett and Tkachuk for a large portion of the third period against the Ottawa Senators this past weekend.

If Tkachuk is going to stick with the team, what more does he have to do? Or in this case, what are some of the things he has to improve upon to make a lasting impression?

With current depth in mind, the Calgary Flames have shored up their left-side significantly. With forwards Johnny Gaudreau and Kris Versteeg firmly planted in the top-six, Tkachuk and Micheal Ferland round out the bottom-six. Tkachuk and Ferland seem to play a similar style of hockey — a fast-paced, hard-hitting, net-driving style. Tkachuk, in this case, has the higher skill ceiling.

Through his eight games, Tkachuk has done what little he can do and that proves two-way responsibility through raw ability, akin to the prowess of veteran forward Matt Stajan (76.9 dZS%, 54.9 CF% in 2016-17). Tkachuk again has higher offensive upside. 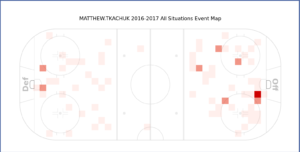 Bearing in mind that the sample size is minuscule, it’s hard to theorize which player in the Flames system could come up and fill the role Tkachuk plays.

Hunter Shinkaruk, could hypothetically bring the offensive prowess, but would be able to match the physical tenacity of the 6’2″, 203-pound Tkachuk?

Brandon Bollig could fill the physical role, but could he aspire to match the offensive talent?

The Calgary Flames seemed to have found the perfect balance between pugnacious forward spliced with the offensive ability of a regular NHL forward — which to his benefit, can seemingly go unmatched by members of the Flames organization. Sample size in mind, Tkachuk boasts a 106.1 PDO (shooting % + save %), numbers which eclipse third-year superstar, Johnny Gaudreau.

Down to Brass Tacks

Tkachuk has shown some promising skill early in his career. His raw puck handling ability combined with his speed and talent in tight are impressive for his age and his presence on the ice, at just 19-years-old, is something the Flames have longed for in a player.

Regardless of where he is playing in the lineup, he should have a positive impact on the Flames. His tenacity on the forecheck is a major contribution to the team even if he’s not on the scoresheet at the end of the night. It’s tough to say what the immediate future holds for Tkachuk, but he has the tools to be a mainstay on the Flames’ roster, even if it means being part of the team’s middle-six forwards.

Tkachuk’s hockey IQ, paired with his size, also give him the potential to be an asset for the Flames in power play and penalty killing situations. Teeming with potential, the Flames are Tkachuk’s oyster — his opportunity to be a member of this roster now, should not be taken lightly.

With his ninth game looming, the Calgary Flames are near a decision on the future of this promising rookie.