Through the first third of the 2018-19 season, the Calgary Flames have emerged as one of the highest scoring clubs in the National Hockey League. Their offensive outburst hasn’t been unexpected, as their most talented players are still quite young and on the up-slope of their careers. 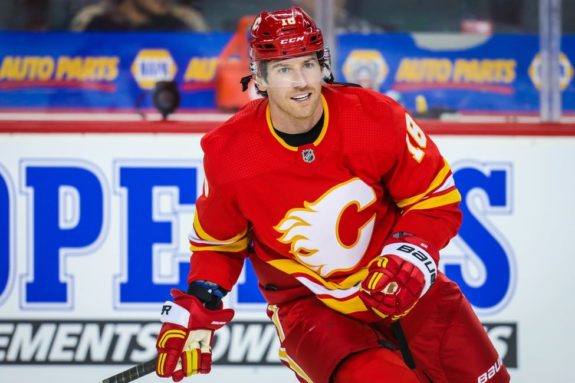 But after a high profile signing on July 1, the big surprise has been that forward James Neal hasn’t been a huge part of Calgary’s goal-scoring explosion. Through the first chunk of the season, he’s been more of a supporting player rather than a driver of the team’s success.

A History of Scoring Success

There’s no big secret why Neal was so appealing to the Flames when he hit the open market as a free agent: the man knows how to score a lot of goals consistently. Heading into free agency Neal had played 10 full seasons in the NHL, split between Dallas, Pittsburgh, Nashville and Vegas. His offensive production is pretty impressive:

Neal’s production has come from two key elements of his game: he has consistently gotten a lot of shots on net and he has had a consistently strong shooting percentage. Both are a product of his uncanny ability to find open ice, receive passes and get shots off quickly and accurately. Aside from his rookie year and the lockout-shortened 2012-13 season, he’s fired 200 (or more) shots on goalies every season. His personal shooting percentage has ranged between 10.4% to 15.4% during his career; if he fires 200 shots on goal, he’ll range between 21 and 31 goals per season like clockwork.

Based on this resume and history of finding the back of the net, Neal’s five year, $5.75 million AAV contract seemed a bit risky for the Flames due to his age, but really didn’t seem all that outlandish.

The Flames Are Scoring, But Neal Isn’t

The good news for the Flames is that they’ve really turned a corner offensively. A year ago, they were among the NHL’s least productive offensive teams – only Buffalo, Arizona, Montreal and Detroit scored less often. This season they’re among the NHL’s most productive offensive squads – only Tampa Bay, Toronto, Washington and Colorado have scored more. But that turnaround hasn’t been due to Neal’s scoring, but rather in spite of a lack of it.

Through the first 31 games, Neal has just three goals – all at even strength. His goal production is tied for 8th on the team at even strength and tied for 11th overall, with his goal-scoring on the same level as defensemen Mark Giordano and Noah Hanifin.

Fourteen players have 65-or-more shots and 4-or-fewer goals. That list is comprised of 13 defencemen and James Neal (73 shots, 3 goals).

There isn’t just one reason for Neal’s diminished production, but several. He’s playing fewer minutes per game for the Flames than he did with the Predators or Golden Knights. In part because of his lessened ice time, he’s putting fewer pucks on net than he has in the past – he’s averaging 2.35 shots per game, down half a shot from last season. His shooting percentage has also cratered; after a decade of shooting over 10% consistently, only 4.1% of his shots are going in.

The Pains of Growing Secondary Scoring

The big challenge for Neal has been his usage. He’s been a top six, offensively-oriented player for his entire career, playing frequently in each game and primarily with skilled offensive players. The Flames’ most skilled offensive players play in pairs on the top two lines: Johnny Gaudreau with Sean Monahan and Mikael Backlund with Matthew Tkachuk. Elias Lindholm has fit like a glove with Gaudreau and Monahan, and unfortunately Neal isn’t a strong enough two-way player to work with Backlund and Tkachuk on the team’s shutdown line.

As a result, Neal’s been put in a secondary role with less established, more emerging offensive players. His on-ice shooting percentage is second-lowest on the team at 5.4%, meaning pucks aren’t going into the net for anybody while he’s on the ice. His most consistent even strength linemates have been veteran two-way forward Derek Ryan and young forwards Sam Bennett and Mark Jankowski, and otherwise he’s been on a second power play unit that hasn’t scored a ton. Eventually the bounces are bound to start going the other way, especially if Bennett and Jankowski keep developing as young scorers.

For a decade, Neal has been a guy that can flat-out score. The puck hasn’t been going in for him to start his tenure with the Flames, but much of that can be explained by his usage and a shooting percentage that’s bound to bounce back. For now Neal has to keep pushing and battling through the growing pains as the Flames continue to develop their secondary scoring.