For the last few seasons, the Bruins have achieved great success, thanks in large part to their superior depth.  One when player goes down, they are more than ready to have someone else step in or step up.  Over the course of the last two weeks, the Bruins depth has been tested, as the team has endured a rash of injuries.

On defense, the Bruins have been operating with a surplus all season.  It had been a challenge finding enough playing time for their seventh defenseman, Matt Bartkowski.  Now, that surplus of NHL defensemen has turned into an area of need.  Over the last two weeks, the Bruins have seen injuries (varying in severity) to Johnny Boychuk, Adam McQuaid, Dougie Hamilton, and Kevan Miller.  Hamilton remains at least two weeks from returning to game action, while Adam McQuaid is still day-to-day as he works his way back from a lower body injury.  Boychuk returned to the ice after missing two games with a lower back injury, an injury suffered in last week’s lost to the Montreal Canadiens.  Miller represents the first of the AHL call-ups, and has seen significant time for an eighth defenseman, participating in almost 20% of Boston’s games this season.  Defensively, the Bruins are teetering on the brink of disaster, struggling to keep six defensemen healthy at a time. 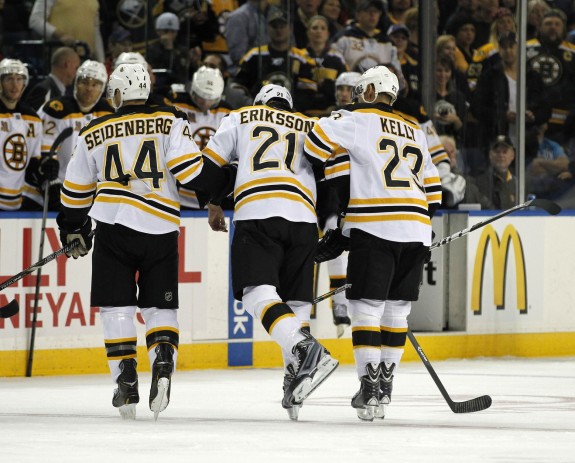 Loui Eriksson is out indefinitely with a concussion, his second of the season. (Kevin Hoffman-USA TODAY Sports)

On offense, the Bruins aren’t much healthier.  In a win over the Pittsburgh Penguins last weekend, the Bruins lost three forwards, two of which will be out for an extended period of time.  Early in the game, Loui Eriksson sustained his second concussion of the season as a result of a high hit from Brooks Orpik.  Later in the first, the Bruins would briefly lose Brad Marchand to a head injury, after he was kneed in the head by James Neal.  Things continued to get worse for the Bruins in the second period, as they lost Chris Kelly to a leg injury.  A timetable for Eriksson’s return hasn’t been established yet, but Kelly may miss more than a month with a fractured fibula.  The next night in Toronto, the Bruins would lose Danny Paille to an undisclosed upper body injury.  Without factoring in Shawn Thornton’s potential suspension, the Bruins are currently down three of their regular forwards.

So how do the Bruins overcome injuries to nearly a third of their opening night roster?  The answer might be more obvious than you think.  Incredible depth. 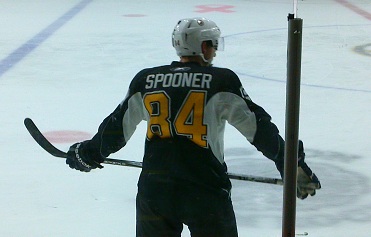 Ryan Spooner is one of the young players stepping up for the Bruins. (Photo: Bob Mand)

In 2011, the Bruins won the Stanley Cup on the backs of their extremely deep roster.  They were able to overcome injuries to Patrice Bergeron, Nathan Horton and Zdeno Chara on their run to the championship.  GM Peter Chiarelli has built his roster with depth in mind, targeting forwards that can play center and wing, as well as players that can play different roles on the roster.  This season, the abundance of injuries is more than roster flexibility can handle.  The Bruins have been forced to bring in reinforcements from Providence.  In years past, this has been an area that has plagued the Bruins, as Providence hasn’t been able to supply the big club with players that are ready to contribute.  This year is a different story.  Ryan Spooner, Matt Fraser and Nick Johnson have seamlessly been inserted into Boston’s lineup, helping the Bruins maintain their Eastern Conference leading pace.  In addition to the AHL reinforcements, Jordan Caron and Matt Bartkowski have stepped up into bigger roles than the team had initially planned, filling the void created by their injured teammates.

At this point, the Bruins appear to be weathering the storm, sitting in first place and on a four game winning streak.  The early success has afforded the team some breathing room, along with the freedom to play their prospects in important roles.  That being said, the Bruins have reached the limits of their organizational depth.  If any additional injuries occur (before injured players return), the team will be forced to look for outside help.  Many teams across the league have been ravaged by injuries this season, but none of those teams have been able to overcome those injuries as well as the Bruins.  Avoiding additional injuries will be critical, but the Bruins were built to endure the grind of the 82 game schedule, and to date, they are doing an excellent job.

Check out our partners at TiqIQ for the best deals on Boston Bruins tickets for all 2013-14 games.