On Dec. 13, 39-year old right winger Jamal Mayers announced his retirement as a player from the National Hockey League. Mayers last played on the 2013 Cup-winning Chicago Blackhawks, and entered the ’13-14 season without an NHL contract. At the time of his retirement, Mayers had logged an impressive 16 seasons in the NHL. Since his Cup win, Mayers has been working as an analyst on the NHL Network. 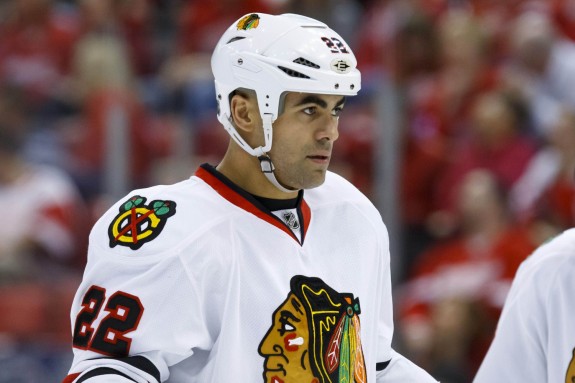 As a rookie for Western Michigan University, Mayers scored 8 goals and 17 assists over 38 games, enough to gain the attention of the St. Louis Blues, who drafted him in the 4th round of the 1993 NHL Entry Draft, 89th overall.

Mayers would soon develop into a star with Michigan, becoming a point-per-game player for the remainder of his collegiate career. He helped solidify Western Michigan’s reputation for developing NHL-quality players, with alumni such as goaltender Glenn Healy and forward Keith Jones, as well as current Ottawa Senators defenceman Joe Corvo. It may be no coincidence that Mayers, Healy and Jones all became analysts following their playing careers – maybe TV just runs in the Western Michigan family.

After graduating, played the majority of his professional rookie season for the Worchester IceCats, but was able to get 6 games of NHL action, recording one assist.

By 1998, Mayers was able to consistently crack the Blues lineup, and has not looked back since. He gained a reputation as a gritty forward who stood up for his teammates and feared no opponent. His physical style of play inevitably caused nagging aches and pains, but Mayers illustrated time and time again what it meant to be a hockey player, bearing through the pain for the good of his team.

St. Louis fans grew to love Mayers for his consistency. You knew what you were getting from Mayers every night – hard work, determination, passion. He created space for his teammates, and made life miserable for his opponents.

It was with the Blues that Mayers scored a career high 15 goals in ’05-’06, and likely would have scored more if not for injuries that caused him to miss 15 games that season.

At the prime of his career, Mayers was given an opportunity to play for his native Canada at the 2007 World Championships, and he delivered in a big way.

In the quarterfinals game against Switzerland, Mayers scored the game-winning goal in a 5-1 blowout. He ended the tournament with 4 goals and 1 assist in 9 games played, and was a key component to Canada’s goal medal team.

Following his success on the international stage, Mayers was invited again to compete for Canada the following year. Expectations were higher this time around, but Mayers continued to deliver under pressure.

In the 2008 World Championships semi-final, Canada faced a motivated Swedish team in Quebec City. Mayers would score Canada’s 3rd goal on-route to an epic 5-4 victory. Unfortunately for Mayers, Team Canada was eliminated in the finals by Russia due to 2-goal efforts from Alex Semin and Ilya Kovalchuk.

2 medals in 2 tournaments? Not shabby. Not shabby at all.

One day before the 2008 NHL Entry Draft, Mayers was traded by the Blues to the Toronto Maple Leaf for a 3rd round draft pick. Mayers would go on to play 115 NHL contests with the Leafs, recording 9 goals, 15 assists and 160 PIMs.

In 2010, on the last day of January, Mayers was traded to the Calgary Flames as a part of the infamous Dion Phaneuf deal. Mayers would finish out the season in Calgary, but it was time to move on.

As a veteran entering his twilight years, the call of the Cup was too strong for Mayers to resist. Like so many before him, Mayers opted to try his luck and signed with the San Jose Sharks in hopes of a deep playoff run. But that year was not meant to be, as the Sharks were eliminated from the postseason by the powerhouse Vancouver Canucks.

Mayers did not have many playing years left, and finishing his career on a high note was key for the veteran.

Mayers ended up signing with the Chicago Blackhawks for the ’11-’12 season on a one year contract that paid him near the league minimum. For Mayers, it was no longer about the money, but the desire to win. Chicago had won the Cup recently in 2010, but was forced to trade the majority of its veterans due to salary cap issues.

Chicago played well in the regular season, finishing with the 6th seed in the Western Conference. The postseason, however, ended up being a massive disappointment. The Hawks were eliminated in the first round by the Phoenix Coyotes, whose physical play and stifling defense frustrated the Blackhawks to no end. For the second year in a row, Mayers experienced playoff disappointment.

Mayers opted to sign another one year contract with the Blackhawks for the 2013 lockout-shortened season, and this time, his decision paid dividends.

The Blackhawks started the season with a historic run of 24 games without losing in regulation. Chicago finished the year on top of the regular season standings, winning the President’s Trophy.

Facing the Boston Bruins, Chicago pushed the B’s to Game 6 before winning the Stanley Cup in Boston following a furious 3rd period comeback.

Though Mayers did not play in the Finals, the Blackhawks petitioned the NHL to have Mayers’ name engraved on the Cup.

They were successful, and Mayers won the first Stanley Cup of his long NHL career.

It’s a fitting end for a hockey warrior, a man that has competed time and time again against the world’s very best. Mayers will be remembered for the work ethic he brought to the rink every single day – as a fierce competitor, as a dedicated teammates, and as a consummate professional.

Alex is a Lead Writer for the Toronto Maple Leafs. Since joining the Hockey Writers, he has also briefly covered the Carolina Hurricanes. He also currently works as an assistant for the Western Mustangs at the University of Western Ontario. Follow him on Twitter @alexmai11.