Since he was summoned from the American Hockey League, Jake Guentzel has been a breath of fresh air for the Pittsburgh Penguins. At only 22 years of age, he’s put up some quality numbers during his brief stay. But is he destined to return to the minors when roster numbers get tight? Or will Guentzel force the Pens’ hand with his eyebrow-raising play?

If you aren’t already familiar with Jake Guentzel, my colleague Julia Stumbaugh wrote a terrific piece on him, soup-to-nuts. Guentzel was brought in to help fill the void when Chris Kunitz went down with an injury. He’s responded by accruing four points in five games while earning a regular spot on the Evgeni Malkin line. That’s pretty good company for a kid who, until his call up, hadn’t played a minute in the NHL. But with Kunitz practicing without a non-contact jersey and despite Guentzel’s impressive performance to this point, it looks like his first stint with the big club may be coming to a close. Even with a potential return to the minors looming, Guentzel is being noticed. Ask players like Tom Kuhnhackl, Bryan Rust, Conor Sheary and Scott Wilson what happens when young players are noticed.

Guentzel hasn’t received much help from head coach Mike Sullivan, either. After averaging slightly over 16 minutes per game in his first three games, he’s been limited to an average of only 11 minutes during his last two. Complicating matters further is the fact that he was a healthy scratch for the game against the Dallas Stars on Dec. 1. When asked about Guentzel’s absence, Sullivan cited a need for Guentzel to be more consistent with “sustained intensity” as a reason for his benching. 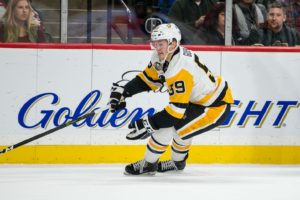 Perhaps the most harrowing yet obvious issue here is the overall roster number. As it stands, (and I’m counting Kunitz as part of the roster) the roster is full and most of the players have one-way contracts. There’s not much room to make an adjustment even if Guentzel was on the periphery of already being a viable NHL presence. Currently, outside of making a trade or (gasp) catastrophic injury, Guentzel’s playing on borrowed time.

If he continues to make strides like he has during this first call up, and if he continues to perform well at the AHL level, it won’t be long before we see Guentzel in a full-time role with the Penguins. As things stand now, though, there’s just not enough room to make that happen.