Following two high-scoring games, it seemed the Stars found the keys to success in 2015. Allowing only six goals-against to their 20 goals scored in a four-game winning streak, the Stars looked like the team that fans expected to see in October.

By the second game of January, Dallas went on a four-game losing streak, but picked up points in two. While the team faced many missed opportunities this season, their special teams and overtime incapacity are the most damaging obstacles in their ascent to the playoffs. Examining the Stars’ streaky play, what problems can the team mend to instill greater consistency going forward? 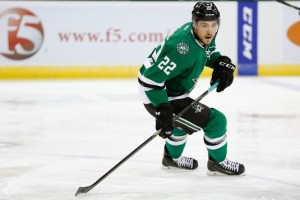 If anything, the Stars are consistent in their inconsistency. The problems that plagued the team at the beginning of the season are the same issues discussed at the mid-point. The inefficient and impotent power play persists in holding Dallas below .500. Special teams and goaltending win games in the modern NHL, and Dallas suffers in both departments.

The problem persists in the fact that the Stars aren’t taking shots with the man advantage. The power play sits at 29th in the league in shots with 82.7 CF%, or  Corsi-for percentage. This statistic means that the Stars are only taking 82.7% of the shots directed at either net during their power plays. So, why are the Stars not taking shots, but allowing so many? For one, their power play units consist of their point leaders; players who wait for the right shot instead of throwing pucks at the net. With the exception of Tyler Seguin, these players wait for the pretty play rather than going for ugly goals and crashing the crease. They over think the power play, often resulting in no shots on net.

One interesting point to note is that opposing teams hone in on Seguin because he’s the player most likely to both shoot and score. This leaves room for other players on the unit to take advantage of the play while the opposition focuses too much defensive attention on the league’s top scorer. Often, Seguin serves as defensive bait when the Stars produce a successful power play.

Though the play is even strength, this video serves as an example. As two Coyotes cover Seguin, Colton Sceviour is left open to accept Jamie Benn’s pass on the rush.

On the 4-on-5 penalty kill, Dallas ranks seventh in the league in all shots taken with 14.9 CF%. While the team’s penalty kill hasn’t been statistically successful in keeping the puck out of the net, they’re putting a high percentage of shorthanded shots on the opposition in comparison to the rest of the league.

Dallas’ penalty kill units are comprised of what fans and journalists call the “Pitbull Line.” The usual suspects include aggressive grinders like Antoine Roussel, Cody Eakin, Ryan Garbutt and Vernon Fiddler, who are also some of the best puck movers on the team. When given the opportunity, Cody Eakin takes the shot and picks up his own rebounds. As a result, he’s easily inserted at center on the third and fourth lines, or at wing on the top line. Overall, Eakin is a versatile player who consistently provides pressure in the opposing end.

If Dallas managed to apply the same pressure on the power play that they exhibit on the penalty kill, they might find great success. While a successful penalty kill is important, a strong power play controls the game. The Stars would drive their own success by improving their under-performing power play.

Lindback Can’t Back That Thing Up

The Stars have suffered unreliable backup goaltending for so many years that fans finally accept it as an inextricable hallmark of the team’s human condition. With one win and six losses in his first season with Dallas, Anders Lindback posted a cringe-inducing 4.26 GAA and .856 SV%. When Lindback started versus Columbus Blue Jackets’ goaltender, Sergei Bobrovsky, earlier this month, fans saw the writing on the wall before the backup goalie’s sixth NHL loss with the Stars.

Each season, the Stars ride Kari Lehtonen to the point of injury and fatigue. In 2013-14, the Finnish netminder finished with the heaviest workload in the league, appearing in 65 of 82 regular season games.

There are a few factors that explain this. For one, Lehtonen is a hard worker who takes any start offered. Lindback is also stuck in a vicious cycle. The backup goaltender takes extra time to warm up in each of his appearances, usually allowing a soft goal before settling into a groove. Likewise, he rarely gets a start because his play is unreliable. This is a classic case of a player not getting ice time because he’s unreliable, though his reliability is a result of not receiving  competitive ice time. Lindback then shows no progress, rendering him a victim of both circular logic and poor defensive coverage.

The Fountain of Youthful Defense 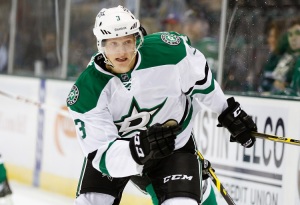 Injuries, trades, and call-ups changed the face of Dallas’ blue line in 2014. The Stars acquired Jason Demers for Brenden Dillon, and moved Sergei Gonchar to make room for rookie, John Klingberg. Going into 2015, the Stars picked up David Schlemko off waivers from the Arizona Coyotes, playing him in a loss to the Avalanche.

The Stars’ management is giving the kids a chance this season, rotating Jamie Oleksiak and Jyrki Jokipakka to keep both defensemen playing consistent ice time. Meanwhile, John Klingberg got off to a steady offensive start for Dallas, initially making good defensive decisions with the puck. Klingberg sat on the bubble for many games before making his first rookie mistakes. In the New Year, Oleksiak is learning to use his size while Jokipakka’s play matures in the AHL. Schlemko’s presence as the seventh defenseman gives the Stars room to develop these young players, providing veteran experience despite ups and downs in his professional career.

It’s frustrating to watch now, but youthful indiscretion is common in every rebuild. Mistakes are part of a necessary process. As the Stars move forward, the young defense will grow and solidify, but for now fans can only be patient with their mistakes. Dallas still lacks a superstar defenseman, but is making strides pairing inexperience with veteran leadership. Overall, the Stars are improving their assets without making potentially costly trades for that big number one.

Excluding two shootout wins, Dallas saw no success in overtime this season. In nine games that went past regulation, the Stars lost six, taking the other three to the shootout where they won only two. These games went to overtime due to leaky defense and the inability to convert on the power play.

The Stars are 0-6 in four-on-four overtime this season.

The Stars play their closest games tit for tat, as the defense dissolves immediately following each goal that they score. The Stars have a hard time holding a lead this way, habitually allowing their offensive push to diminish by the third period. They play best in the offensive end, especially with their crew of offensive-minded defensemen. This also contributes to the high frequency of breakaways and odd-man rushes the Stars allow, as their defense tends to pinch even with a multi-goal lead.

While overtime is played at even strength, the Stars show a statistical disadvantage during 4-on-4 play. Players cite the game opening up, highly offensive player match-ups, and too little patience as possible reasons for the team’s overtime detriments. In both of the last two overtime losses, turnovers and open passing lanes proved problematic. Each overtime goal scored by Chicago and Nashville was shot from the left side of the defensive zone, beating Kari Lehtonen on the blocker side. While Dallas players have the time and defensive zone coverage to recover from mistakes in regulation play, the 4-on-4 format magnifies their shortcomings. In a sudden-death situation with more open ice, there is too little opportunity for recovery.

Pulling Out of the Nosedive

In the New Year, the Stars find themselves in another four-game losing streak as they attempt to correct their fluttering season. The longest winning streak the Stars have strung together under Lindy Ruff is four games, while their losing streaks are much longer. The bittersweet news is that Dallas is taking the best Central Division teams to overtime, but only collecting a single point in most. Before the recent skid, the Stars won eight of their previous nine games, and strung two winning streaks together. The Stars still suffer from streaky play, but their current success is more frequent than that of the early season.

As the Stars face the Ottawa Senators tonight, they might be without three key forwards, including Tyler Seguin, Jamie Benn, and Vernon Fiddler, due to illness or injury. This gives other players an opportunity to step up, providing leadership and depth scoring during a time of desperation. Last season the Stars played their best hockey in the face of adversity, and hopefully this is the challenge they need to fight back into the NHL playoffs in 2015.

Update, 10:30 a.m.: All three supposed scratches took part in line rushes at the Stars morning skate, and will likely play against the Senators.