Canada is still the king of hockey in the world. But it seems that they are starting to lose some grip on their dominance.

Multiple outlets have released their current list of rankings for the 2016 entry draft. One look at the top 10 of these rankings reveals something very interesting. There’s a particular nationality notably absent from the list. That country is Canada.

The current top 10 shows just a couple Canadians on it, based on where the player was born. Pierre Luc-Dubois and Julien Gauthier are from Quebec and playing in the QMJHL. Jakub Chychrun would have played on Team Canada, but is originally from Florida. What’s going on here? Why all of a sudden is Canada, the powerhouse of the hockey world, lacking in top-end talent in this upcoming draft?

Don’t get me wrong. Canada still dominates in terms of overall talent in the NHL. The Olympics are proof of this. But we are in the midst of a shift in terms of the young talent coming in. Canada does not have the foothold on this like they used to.

Take a look at the names at the top of the draft rankings. Auston Matthews and Matthew Tkachuk hail from Arizona. Jesse Puljujarvi and Patrik Laine are from Finland. Although Alexander Nylander was born in Calgary, he played for Sweden in the world juniors. Many expect these players to go in the top five this June.

Canada will still do well when it comes to the number of players drafted. But because of the rise of the United States and Europe, the gap isn’t as big. As the years go on, this should continue.

A Look At Recent History

I went back and looked at past drafts going back to 2005 to see if there was a trend in where players came from. There is a developing trend that started with the 2014 draft. 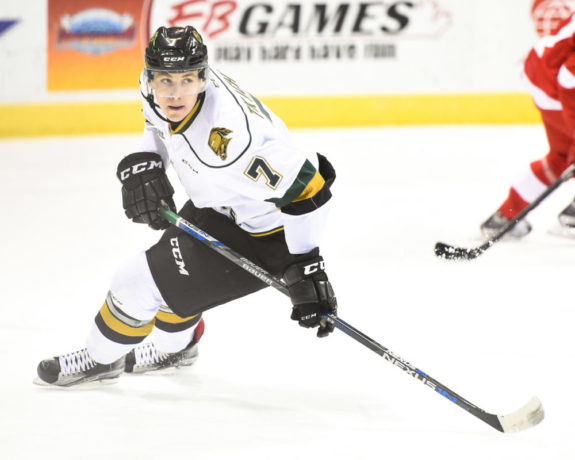 Players like Matthew Tkachuk are helping the world bridge the gap with Canada. Photo by Aaron Bell/OHL Images

Europe had their most successful draft in the last 11 drafts last season, with 76 players taken. They’ve average about 59 players in the last 11 drafts. In the last four drafts, the number of Europeans drafted have been 57, 58, 65, 76. NHL teams have noticed this trend, and have responded accordingly.

Teams now have more of a scouting presence in Europe. The Columbus Blue Jackets for instance have dedicated staff in Europe. GM Jarmo Kekalainen is a former GM in Finland. He saw the opportunity and jumped on it.

Columbus has a couple of European scouts in Kjell Larsson and Milan Tichy on staff. Larsson oversees all European scouting efforts for the Blue Jackets, while Tichy helps out in Europe on a part-time basis. With more talent coming from Europe, teams like the Blue Jackets have more dedicated staff there.

This would explain the rise in European drafting numbers. There is more talent coming from there than ever. This is a testament to the development programs that are available there now. Not only are more players coming over, there are better players coming over. Many experts think Laine could challenge Matthews for number one overall in June.

Canada you are still the king of hockey. But your foothold is starting to lose some grip. Other countries are slowly catching up to you, as shown by the top of this upcoming draft. Is this just a blip on Canada’s radar, or the start of something new that will last? Canada didn’t earn a medal in the world juniors and finished outside the top four. Finland won the event, followed by Russia, the United States, and Sweden.

After several years of trying, it seems the world is finally starting to catch up to almighty Canada in their beloved sport of hockey.