The Carolina Hurricanes closed out their preseason Friday night with a four-game winning streak, notching a 2-1 victory over their Metropolitan Division rivals, the Pittsburgh Penguins. As preseason games go with their inherent lack of meaning, there does exist the opportunity to pick out some positives for Coach Bill Peters’ young team. Whether any will transfer into the regular season remains to be seen. But, a few preseason positives stand out that will certainly make this team more competitive if they do materialize in the regular season.

Aggressive at the Net

The ‘Canes have played with more zest at the goal mouth, something that was sorely missing from this team last season. Peters preached “net-front presence” a lot in his first season as the head coach. One of the question marks was why this was such a difficult concept for the team to comprehend and bring to the ice. I maintain that one of the factors in Anton Khudobin being traded was that on paper, his year was a stinker. While I’m certain that general manager Ron Francis knew better than merely what the on-paper picture showed for Khudobin, the bottom line was that his team did not generate the offense necessary to get him in the win column.

Obviously that is ancient history, but it goes to the point that the Hurricanes have to play every game with a fierce determination to get in front of the net and make scoring opportunities. To put it in perspective, the ‘Canes finished last year’s campaign with 71 points, 36 points behind the Penguins, who made the playoffs with 97.

I don’t know anyone who is of the opinion that the Penguins, Washington Capitals, New York Islanders or New York Rangers are going to suddenly fall into mediocrity this season. The ‘Canes will have to find at least 30 more points to move into the circle of teams that will likely be in contention. This means that they will of necessity have to find their offense night in and night out. They simply cannot hang Cam Ward or Eddie Lack out to dry when they are playing well and giving the team a chance to win. 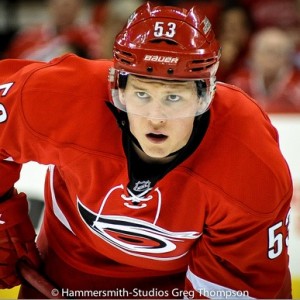 Jeff Skinner is one of the Hurricanes’ most important players. His seamless skating ability is a thing of beauty. He has a natural ability to take advantage of situations and make the most of scoring opportunities. However his run of concussions have taken their toll, or at least they seemed to last season. It appeared to me and to others that he seemed tentative about going to the net. He may not have been tentative, but it sure appeared that something was not right.

This preseason, Skinner led the team with three goals. The team, overall, has 15 goals and a total of 37 points scored as a team. By comparison, the Penguins have 18 goals and 46 points scored. The glaring reality is that guys like Skinner have to produce for the ‘Canes to have any hope of sniffing the playoffs. Not to mention the production needed from Eric Staal, Elias Lindholm and Jordan Staal.

The team cannot afford to depend on Justin Faulk and others from the defense to score. Those points should be on top of a solid offensive output by the forwards. Lots of defensemen score in the NHL, but it is my contention that this team in particular must have more from up top. Skinner is a huge part of what will be good or bad for the ‘Canes this season. If he can play without fear, like it looks like he has in the preseason, it very well could be more good than bad.

Admittedly, I have not seen all of the ‘Canes’ preseason games. Ward has had a couple of tough outings. But, what I saw Friday night in Raleigh’s PNC Arena was the goaltender as I’ve not often seen. He appeared loose, confident and focused, going after pucks and making saves like it was April and the team was making a playoff run. To be a meaningless preseason game, Ward was dialed in and that is a definite positive.

With Lack looming, Ward may have felt that he really had to bring it against the Penguins in order to keep his spot as starting goalie. Whatever the motivation, Ward looks ready, as ready as I have seen him in quite some time. A healthy, focused Ward can make an enormous difference in the Hurricanes’ season.  He is not in the circle of the elite goalies in the NHL, but he can be as good as any when he is on his game.

One of the by-products of Coach Peters’ first year was a vastly improved penalty kill. That trend has continued in the ‘Canes’ preseason. After keeping the Pens out of the goal on four-of-four power plays Friday night, the team wound up with a penalty kill of 88 percent. If they can continue to roll out on an effective penalty kill, the ‘Canes will be in a position to give themselves a better chance to win.

With Tuesday’s final cuts looming and the season starting next week, there are still areas the Hurricanes need to improve on when the games count. But, this has been a very good preseason for the ‘Canes, and hopefully a sign of more positive things to come.