You know what would make preseason predictions even better? Turning them into a contest to see who’s the best at it. So that’s what we did.

Seventeen THW writers participated, and only one will survive. Awaiting him will be bragging rights. And maybe a trinket or homemade trophy (or cookies!) of some kind. We’ll see.

The great Bill Schoeninger already broke down our standings predictions.

There are only two things we really, really agree on: Boston and Pittsburgh will win their divisions. That’s it.

Many teams, though, have definite advantages over the runner-up:

Chicago, if healthy and rolling, is a beast. But Bruce Brudreau knows how to coach a high-scoring, points-generating monster in the regular season, and Anaheim got better after adding Ryan Kesler.

A healthy John Tavares, a competent starting goaltender, a couple solid new forwards, and an upgraded defense. Things are looking good for the Islanders. Florida is the little advanced stats darling that could.

Colorado is a house of cards just waiting for a gust of wind.

The rest of the categories are complete toss-ups:

What happened to the East? Surprising.

Eek, sorry, Canada. Craig MacTavish’s Oilers have not only stunk, but they have had absolutely no identity to speak of. That is all on the Head Coach. If the Oilers come out of the gate still sucking, he needs to go.

Figured to be a contentious category. I have no problem with these being the top 3. I tried not to be too much of a homer for St. Louis, so I picked Boston. That way, even if I’m wrong, I STILL WIN. Not a lot of love for LA to repeat. Good.

The Rules of the Game 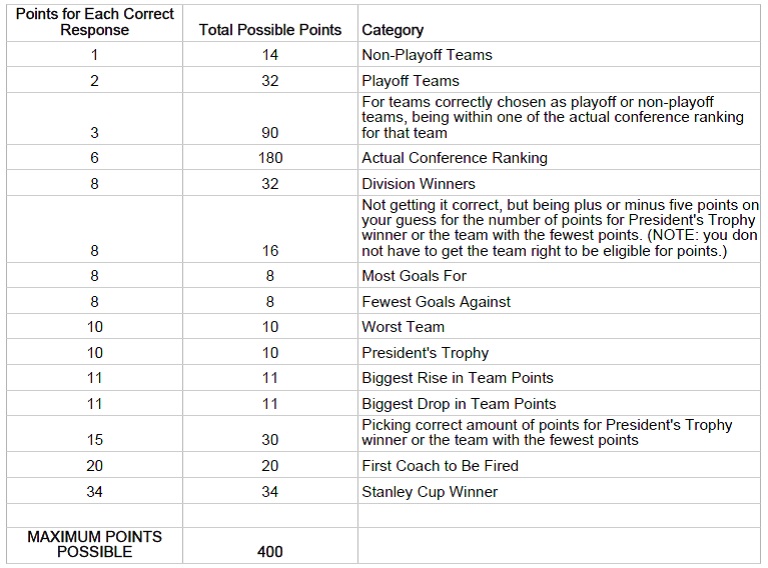