The Chicago Blackhawks certainly are not a team lacking for star power. Jonathan Toews, Patrick Kane, Marian Hossa, Patrick Sharp, Duncan Keith, and Brent Seabrook round out one of the best core groups in the NHL. Still, the key to the team’s two recent Stanley Cup victories has been its depth rather than the names at the top. Chicago’s roster this year is strong, but has one evident weak point in the form of a player who will be centering Hossa and Sharp to begin Game 1 against St. Louis: Michal Handzus.

Michal Handzus, or the Antithesis of Puck Possession

The Blackhawks are an excellent possession team, something you might expect given that the team evidently focuses so heavily on it. Additionally, Chicago’s game is predicated on speed, and a player lacking it will tend to stick out like a sore thumb.

And a sore thumb we have. Handzus may be the slowest active player in the NHL, and the clash between what he can offer and what the Blackhawks require has been cacophonic. He has manifested himself as one of the league’s very worst fits for a puck possession scheme, ranking near the cellar in raw and relative Corsi among Blackhawks players.

You’ll notice that all three of Marcus Kruger, Brandon Bollig, and Ben Smith have even worse possession numbers than Handzus. There are several reasons that these three don’t deserve the same criticism as he does; namely, they start their shifts in the offensive zone less than 20% of the time (compared to 60% for Handzus), and play their even strength minutes with other fourth line talent. Handzus has been spoon fed ice time all season long with the likes of Patrick Kane, Patrick Sharp, and Brandon Saad — the latter two being excellent possession players —but nevertheless has racked up some truly terrible Corsi numbers.

After adjusting for offensive zone starts and linemate quality, it becomes uncomfortably clear just how bad of a fit Handzus is for Chicago’s intended style. The problem, as we will get to, is only exacerbated by the fact that he plays on the second line, always with at least one of the Blackhawks’ star wingers.

This can be kept fairly simple and straightforward.

In his last 36 games, Handzus has registered just 6 points — all of them assists — while playing primarily with top-6 forward talent.  His deleterious impact on Patrick Kane’s offensive 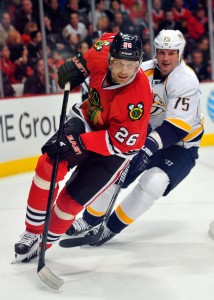 game was astonishing; Kane didn’t score an even-strength goal while on the ice with Handzus for almost 300 straight minutes this season.

The eye test coheres with the stats. Handzus’ puck skills have declined noticeably with age, and his glacial skating prohibits him from being a factor in most rushes that the Blackhawks generate while he is on the ice.

Put differently, Handzus has become nearly irrelevant in the attacking zone; his wingers are often forced to effectively play 4-on-5 while on offense. When this is conflated with his pernicious influence on puck possession, Handzus grades out as an enormous net negative.

The Problem and its Potential Solutions

In a nutshell, Handzus’ role is the problem. If he played fourth line minutes with fourth line talent, his flaws would be much less impactful as well as far easier to hide.

As mentioned, however, Handzus is centering Sharp and Hossa, two of Chicago’s best and most important players. There is little reason to expect that what his presence did to Kane won’t carry over to those two, and the issue resulting from this is obvious: Chicago can’t afford to have two of its most potent offensive forces not show up against St. Louis.

Peter Regin has been strong for the Blackhawks since being acquired from the Islanders in February. While he is hardly an ideal candidate to center a scoring line, he is a much more appropriate and sensible fit than Handzus in between Sharp and Hossa. Ben Smith is another option, having played quite well when forced into center duty after Jonathan Toews’ injury in late March. Moving Smith to the middle would have the added benefit of opening up a spot for Jeremy Morin, who has unquestionably earned it.

It remains to be seen whether these options will be explored, as Joel Quenneville has been a steady backer of Handzus since he first came to Chicago last season. Until something changes, his role in the lineup constitutes the Blackhawks’ most obvious and exploitable weakness.