The Chicago Blackhawks are hip. The logo is cool. And a number of hip, cool celebrities keep the jersey in style by wearing it in public, or sporting it in movies and television shows and referencing it in songs.

An Original Six franchise, the Blackhawks’ popularity has blossomed since its resurgence. But even when the team failed to win a Stanley Cup from 1961 to 2010 and struggled to fill half of the seats at the United Center in the early- to mid-2000s, the Blackhawks embodied the city’s grit and fortitude.

A long line of celebrities, including actors Jim Belushi, Vince Vaughn and John and Joan Cusack, are big supporters of the franchise. Belushi partied with the Stanley Cup immediately after the team captured the trophy in 2013. His pose while holding the Cup over his head and wearing a freshly minted championship T-shirt is a striking example of the passion the club brings out in its fans.

Before meeting his ultimate demise in the movie, The Friends of Eddie Coyle, unsuspecting small-time criminal Eddie is escorted to a Boston Bruins match against the Blackhawks. Portrayed by actor Robert Mitchum, Eddie did not suspect his “friends” were planning to take care of old “business” after the game. Watching his final game, Eddie is amazed by Bruins defenseman Bobby Orr who skates around the Blackhawks’ defense. “Can you imagine being a kid like that?” he says with a sense of irony. “Geeze, what a future he’s got, huh?”

In the 1996 cult movie classic, Swingers, Trent, played by a young Vince Vaughn, displays his fandom while playing a NHLPA Hockey ’93 video game between the Blackhawks and Los Angeles Kings. Trent becomes excited after the digital version of No. 27 (Jeremy Roenick) annihilates No. 99 (Wayne Gretzky) with a bloody body check. He brags: “It’s not so much me as it’s Roenick. He’s good.”

An older Vince Vaughn relished another opportunity to glorify his love for the organization. In the 2011 movie,  The Dilemma, Vaughn’s character, Ronny Valentine, cheers on his troubled friend, Nick Brannen (Kevin James), to seize the moment. During an intermission promotion, Nick missed his first two center-ice attempts to score before a red sea of Blackhawks jerseys. Hanging on the glass, Ronny yells: “Great moments are born from great opportunities. One shot.” Spoiler alert: Nick makes it, winning two tickets to the NHL All-Star Game. 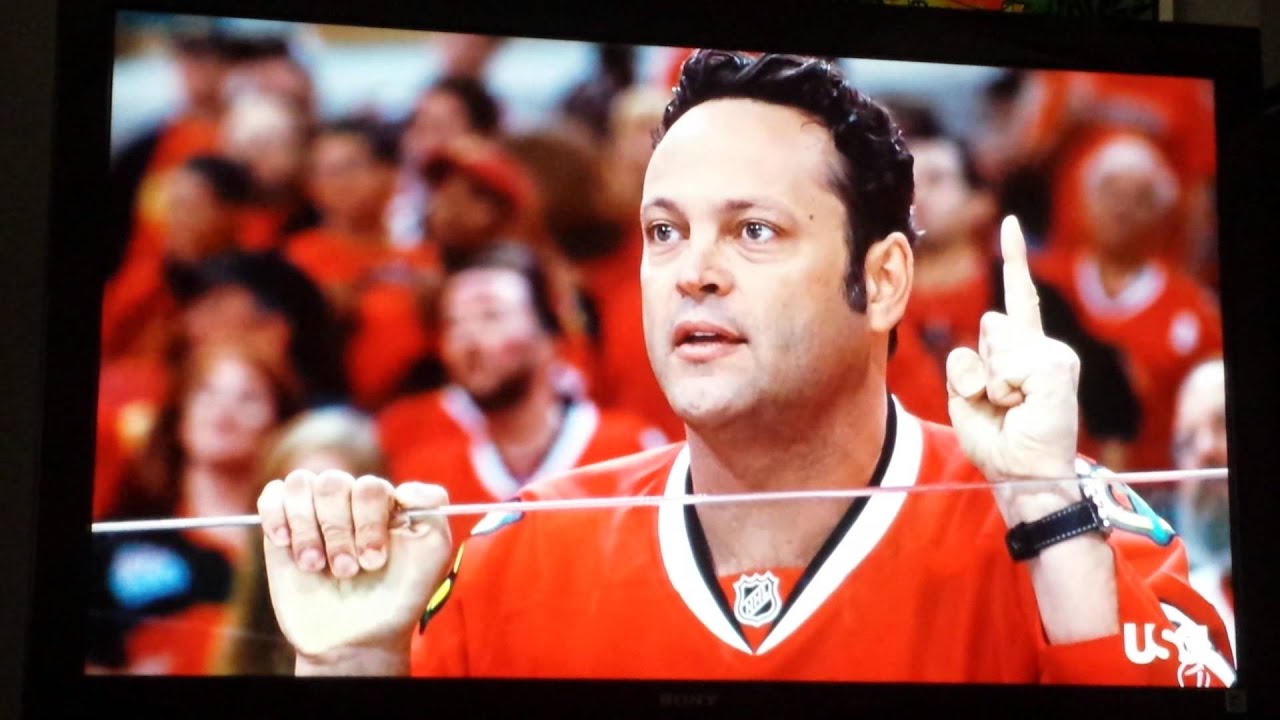 7. Band Gets ‘More Out of Today’ in Blackhawks Uniform

The singer of the Swedish thrash metal band 59 Times the Pain wears a Blackhawks jersey during the video for the song, “More Out of Today.” The singer is wearing a No. 27 Jeremy Roenick uniform as he thrashes around on stage. The band must have been big hockey fans in the mid-1990s. It also released a hockey-themed song, “2 Minutes Remaining in the 3rd.” The lyrics include:

“Trailing or ahead there’s one thing you gotta do,
2min remaining in the 3rd get the puck over your own blue,
If you’re trailing pull your goalie ahead then play strong D,
This is what it’s all about what the crowd came to see.”

One of the highest-rated network television shows in 2013, “Modern Family” used the club as a dialogue engine to drive the series. In one episode, Pepper Saltzman, who is played by actor Nathan Lane, misrepresents the name of the team. “Wow. They can call a team that?” he asks. Pepper is quickly corrected. In another episode, Phil Dunphy, a real estate agent played by actor Ty Burrell, employs his family to help sell a home to a Blackhawks fan by creating a franchise-friendly residence.

All Clark Griswold wants is a perfect family Christmas. The Chevy Chase-inspired character in the movie National Lampoon’s Christmas Vacation tries … and tries … and tries … to make the holiday the way he imagines it to be. But, like everything else Griswold does in the popular movie franchise, his good intentions create funny slapstick comedy. At least he looks good wearing his No. 00 Blackhawks jersey in the scene where he watches his unwelcome cousin drain raw sewage from his camper.

Paying homage to the movie Sudden Death during an episode of the TV series, Parks and Recreation, Andy Dwyer (Chris Pratt) sings about the heroics of actor Jean-Claude Van Damme. Performing the song as a one-man-band in front of elementary-aged school children, Dwyer immortalized the way Van Damme’s character, Darren McCord, defeats terrorists by pretending to be a Pittsburgh Penguins goalie against the Blackhawks in Game 7 of the Stanley Cup Final. McCord makes a last-second save to send the game into overtime. He also saves the life of the Vice President during the 1995 action flick, Dwyer sings. 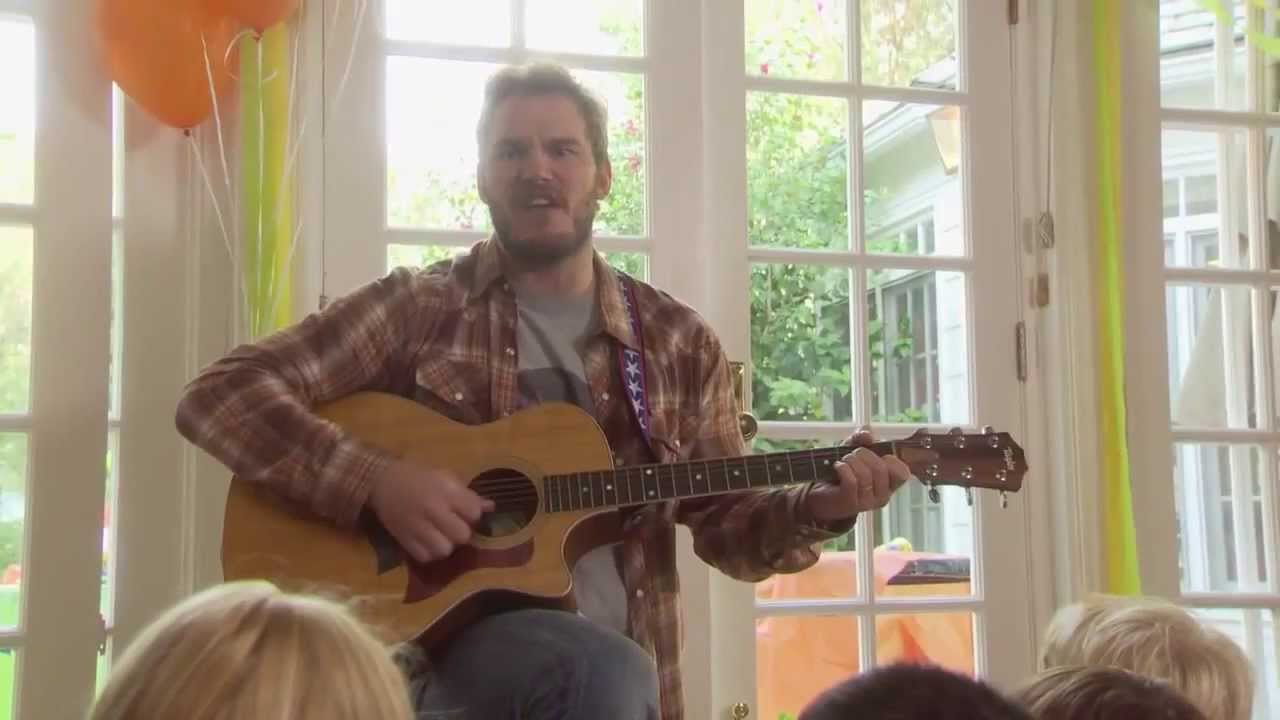 Singer Justin Bieber can dance but he doesn’t often show a lot of respect. Like the time he was granted permission to enter the home locker room at the United Center soon after the Blackhawks captured the 2013 Stanley Cup. He is pictured taking a photo of the Cup while – GASP! – standing on the Blackhawks logo. It was a slap in the face for players and fans. Bieber claims it was an accident but trust me when I say there are players, like ex-Hawk Matthew Barnaby, who take the tradition seriously. They do not like it when pop stars – or sophomore NHL reporters – trample on the Hawk Head. Once during the 2005-06 season, Barnaby all but body-checked a distracted-by-deadline trespasser off the sacred carpet.

As tough as it is to watch Billy Crystal attempt to act like a tough, street-wise police officer in the 1986 movie, Running Scared, it’s nearly as hard to see the way his character, Danny Costanzo, abused the look of a Blackhawks jersey. In a scene where he attempts to instil the virtues of going straight to an apprehended felon, Costanzo, wears a skin-tight uniform tucked into blue jeans. At one point, he says, “I’m sorry, man, but we gotta bust you.” Funny, that’s exactly what the fashion police would have said to Costanzo.

Outside of the franchise’s all-time greats such as Tony Esposito, Stan Mikita, Jeremy Roenick and Jonathan Toews, the most well-known performers to ever wear a Blackhawks jersey are … Wayne and Garth. The Wayne’s World characters from Saturday Night Live and motion pictures were basement-dwelling rock-and-roll fanboys who loved hockey. In one cool scene from the 1992 self-titled movie, Wayne and Garth are playing street hockey but keep getting interrupted by passing cars. Each time the coast is clear, they yell, “Game on!” For wearing the Blackhawks jersey with such class and dignity, Wayne and Garth, “Rock on!”