The Arena Chronicles – Part III – Where We Go From Here

Having covered the past and the present in the first two installments, time to turn to the future. Fear not, however, as I do not bring you a black hooded spectre like the Ghost of Christmas Yet To Come.

First, a few preliminaries. This piece is devoted entirely to what is possible. I claim no special inside information about the specific discussions being conducted at present.

While I have made inquiries, they have produced no new concrete information, other than that efforts are ongoing on multiple fronts. As the Dispatch reported recently, the Chamber of Commerce is going to spearhead a study on a number of options, and that is consistent with the intention to explore a wide variety of options. Mike Priest has indicated that the City, State, County and others are involved in the discussions, which is as it should be. 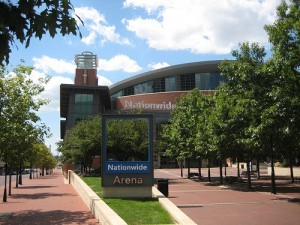 The lack of public pronouncements on this whole issue is a positive thing, not a negative. As we all learned in June, the premature airing of incomplete plans is misleading, and ultimately destructive to the interests of all concerned. As I will hopefully show, this issue is far bigger than the Blue Jackets, and accordingly deserves a corresponding level of attention, deliberation and planning.

All of the involved parties need to feel free to float and explore various ideas in a secure and confidential environment. Engaging in unnecessary or premature public debate only fuels dissention, forces compromises that are ultimately unwise, and almost universally creates an adversarial atmosphere. If and when public debate is necessary, it will certainly take place. However, forcing it serves no useful purpose.

So, with my legal disclaimers in place, let’s explore not only what can be done, but why it should be done. Actually, if we focus more on the who and the why, the specific whats should take care of themselves.

Of course, we are operating at a disadvantage, in that we have no access to the specific dollar numbers involved, on part of any of the interested parties.  It makes sense then, to start with what we do know:

Keep in mind that the primary reason we are even talking about a deficit situation is the election defeat in 1997.  As discussed in previously, that defeat came largely as the result of some poor timing, outsider influence, an unfortunate combination of a soccer stadium and arena in a single measure and an unproven dream of an Arena District that revitalizes downtown.

That last element, which was one of the key barriers to success at the polls, is no longer an issue.

Subsequent history has validated the dream, and far exceeded even the rosiest predictions for the Arena District.  It continues to grow and thrive, and the addition of Huntington Park only adds to the draw.   However, as the Glenn studies show, it is the Arena and the Blue Jackets that have driven the District to the $2 billion economic engine it is today.

All of this comes as the result of the willingness of Nationwide and the McConnells to step forward, take substantial risk, and bring the City an NHL franchise, a first-class arena and renewed economic prosperity for the downtown.  Sure, Nationwide got some tax breaks and some favorable pricing on land, but without the boldness of McFerson and McConnell, we are not talking about hockey today.

So, the “whys” are pretty obvious – there is simply too much at stake (economically and otherwise) – for a fix not to happen.

Now, the question turns to who has skin in this game?  Obviously, Nationwide has been footing the bills and paying the losses on the arena, and the Blue Jackets have been subsidizing Nationwide through the sub-optimal lease arrangement.  That lease was necessary, however, to make the original project anywhere near feasible for Nationwide.

The City of Columbus has benefitted enormously from this deal. Sure, they put some millions out for infrastructure, but nothing that would not have been required eventually as that area got developed.  In the meantime, they are benefitting from the increased tax revenue, both personal and business, plus the derivative income streams from spending that occurs throughout the rest of the city.  Similarly, the business owners in the Arena District and adjacent areas have a vested interest in seeing this gravy train continue.

Franklin County and the FCCFC  have a big stake in the action.  Nationwide Arena has provided them with a privately funded adjunct to the Convention Center, enhanced capacity to attract larger conventions, and a professional sports team to enhance visibility.  Again, the Glenn reports highlight the impact that the entire operation has had upon tourism and spending in the region.

Finally, the State of Ohio and The Ohio State University have significant, if perhaps less obvious, interests in the game.

As documented in Part I of this series, the State and OSU were intimately involved in the genesis of this entire situation, and both have ongoing interests.  The state is interested at multiple levels, from the tax revenue that it derives from the economic engine of the Arena District, to its financial stake in the financing of the Schottenstein Center, to the more amorphous virtue of the only NHL franchise in the state.  OSU and Nationwide have been competitors in the Arena game since Day 1, and they are each taking a 50% slice of a small pie.  As one observer commented – “Columbus has two Class A venues in a Class B market.”  So, OSU is interested in a solution to this as well, but perhaps from a slightly less benevolent perspective.

I’m not forgetting the fan base or the citizens of Columbus in general.  However, the public has demonstrated its disdain for being a direct funding source on a couple of different occasions, and is not likely to be appreciably more receptive in the near future.  While any public participation involves some de facto citizen involvement, I don’t expect a direct appeal to the taxpayers to emerge from the ongoing discussions.

So, what possible solutions are there?  Frankly, there are too many to contemplate.  But, here are some factors that must be considered in the process of conceiving a solution:

Government Involvement – There are lots of reasons why there are no private arenas for professional sports, and we are seeing why.  Arenas are more expensive to build (on a cost per patron basis) than stadiums, and the economic pressure put on the developers/owners and tenants is more than the private sector can usually bear. This is magnified here in Columbus, where two venues are competing for a relatively small market. Combine this with the public benefit that such structures bring to a community, as documented in the Glenn reports, and it is easy to see that some level of government involvement is both necessary and appropriate.

The Chamber of Commerce report will be out soon, and then the work will begin in earnest.  We may not hear about it for awhile, but that is just fine.  It’s not important to do it soon, or do it in public.  It is important to do it correctly.