Is Dan Bylsma a great coach or a product of a talented players like Evgeni Malkin, James Neal and Jarome Iginla?(Marc DesRosiers-USA TODAY Sports)

Let’s get one thing straight, Bylsma is a genuine human being. He comes off as being family-oriented, hard-working, and looks like he truly cares for the players on his team. As great as the Pittsburgh Penguins’ head coach may be as a person, I’m not evaluating his personal character. I’m evaluating his coaching ability.

In five seasons with the Pens, Bylsma has accomplished more as a head coach than many coaches who’ve stood for decades behind an NHL bench. His resume speaks for itself. Bylsma earned a Stanley Cup in his first season, finished three consecutive seasons with over 100 points (excluding 2012-2013 lockout shortened season of 48 games), and won a Jack Adams Award. Disco Dan has been at the helm for a team that has led the league in goals per game over the past two seasons. He’s also responsible for constructing winning streaks of 10 or more games in the last three years. Bylsma catapulted up the coaching ranks from AHL head coach, to head coach of the Pens in five years. His instant success had everyone awestruck.

[Also: When will Marc-Andre Fleury Play Next?]

To have Bylsma’s success, one must have a few talented players on their roster. Having the responsibility of managing two former MVP’s, Sidney Crosby and Evgeni Malkin is no easy task. Not that these players have huge egos, but Bylsma has to make sure his superstars are happy. The Pens talent doesn’t end there. Kris Letang is a future Norris Trophy winner and James Neal is the newest up-and-coming sniper to enter the NHL picture. Bylsma certainly has his work cut out for him dealing with an unending list of stars.

This season created more complications for the Pens’ bench manager. There was another former Hart Trophy winner added to Bylsma’s roster when Jarome Iginla was dealt to the Pens. Bylsma has struggled to find a comfortable spot for this 530 goal-scorer on the top two scoring lines. While Bylsma has seesawed Iginla from Crosby’s line back to Malkin’s line, the team has still scored plenty of goals against their playoff opponents. The Pens averaged four goals a game when they squeezed by the New York Islanders and have held the same scoring pace in their second round series against the Ottawa Senators.

No matter what players suit up around talents like Crosby, Malkin and Letang, the team should be able to win. Malkin won the scoring title and league MVP a season ago. Crosby was on a different level compared to any player who participated in the locked-out shortened season this past year. Letang might win the Norris Trophy this season and will win one before his career is over. Based on the present talent on the Pens, any coach should be able to finish atop the Eastern Conference each season. (Pittsburgh Penguins Roster)

The same success Bylsma and the Pens have in the regular season should hold weight in the playoffs. Besides Bylsma’s Stanley Cup in 2008-09, this hasn’t been true. His playoff resume has been nothing short of disappointments and frustrating circumstances since his debut season.

The Pens have found ways to make life more stressful than is necessary, especially in the playoffs. When questioning the team’s strategy, line combinations, match-ups or adjustments, the coach is solely responsible. This list of concerns has grown longer since Bylsma’s been behind the bench. Pens’ fans have come to complain, and have many logical concerns with some of Bylsma’s decisions and indecisions once the playoffs have gotten underway over the past few years. 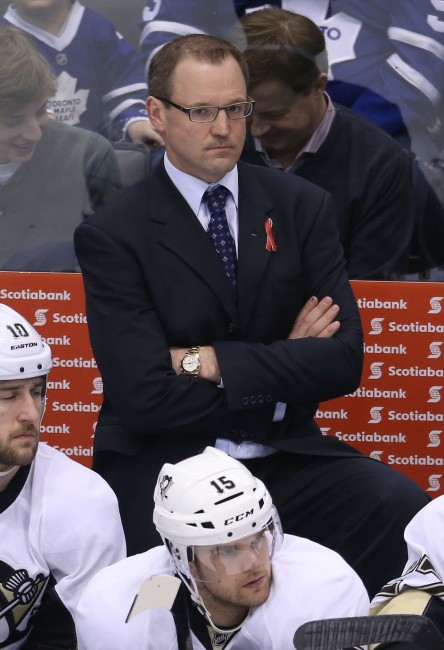 Dan Bylsma took a lot of criticism but his team bounced back in Game 4 against the Ottawa Senators at Scotia Bank Place. (Tom Szczerbowski-USA TODAY Sports)

Blame Malkin, Chris Kunitz or any player on the ice during the Pens’ Game 3 debacle versus the Senators. When they surrendered a short-handed goal with under a minute to go in the contest this fault lies on Bylsma. If Bylsma wanted defensive forwards to sit back and defend the Sens’ final attempt to get the equalizer, he had the face-off opportunity to do that after the Erik Karlsson penalty. Instead he threw on his first power play unit and told them to sit back and play defense. Craig Anderson should have never left his net until the game was over since the Pens had a man-advantage. Whether you agree or disagree with Bylsma’s late game strategy, the Pens players who get paid to score shouldn’t be on the ice to play defense at the end of that game. If Bylsma wanted to play defensive hockey, he should’ve put on the players who are paid to play defense. No matter who was on the ice, the Pens should’ve kept possession of the puck since they had a power play.

“We had a brief plan at the bench before going out to possess the puck and hold onto the puck with the guys we put on the ice. Unfortunately we had two situations where we dumped the puck in and weren’t able to put much pressure on the dump-in and allowed them to have a rush up the ice. We didn’t accomplish our goal.”

The playoffs are different because weaknesses are exposed. Teams that make adjustments to compensate for their weaknesses make the furthest runs in the post-season. Many times, Bylsma is too stubborn to change his team’s system to counter what weaknesses opponents like the Islanders exposed in the last series. He felt that the Pens were not playing “their game” well enough or they did not have good puck management. Bylsma needs to give other teams some credit; they’re trying to score with the puck too. If Bylsma tried delivering a message to his team to change the way they were playing defense against the Islanders, the memo was never read. Adjustments, and specifically in-game adjustments, have always been hard to come by when watching the Pens play. They think if they play “their game” and own puck possession, this strategy will prevail.

Many people are concerned with what line Iginla plays on in the playoffs. As long as the Pens are averaging four goals a game, Bylsma’s decision is irrelevant. If the team was having scoring issues, the Iginla soap opera would have more meaning. Whenever Crosby and Malkin have been healthy in the playoffs, scoring has come with ease. The only time the “Iginla line issue” comes into play is in the defensive zone when Iginla is trying to receive a breakout pass on his backhand. Iginla has not been caught on the defensive half-boards waiting for a breakout pass very often in the playoffs. 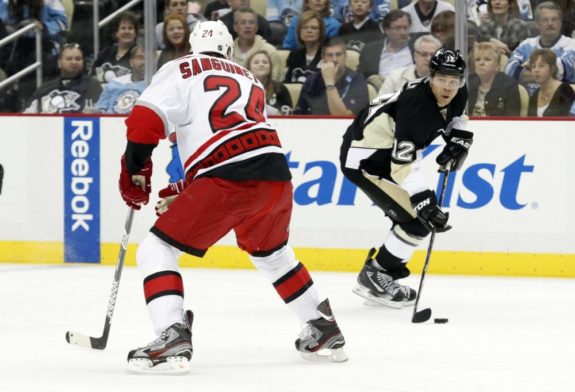 What line do you think Jarome Iginla should play on? (Charles LeClaire-USA TODAY Sports)

My real concerns are who Bylsma matches his lines up against on the other team. Last year against the Philadelphia Flyers, Sean Couturier gave the Malkin line fits. In the regular and post-season, Couturier was on the ice for every shift that the Malkin line was on the ice. The Malkin, Neal, and Kunitz line scored plenty of goals against the Flyers, but Couturier was under the skin of Geno and Neal in the playoffs. This duo took a ton of undisciplined penalties that completely played into the Flyers’ hands. The Flyers power play owned the Pens, and Bylsma did nothing to prevent Couturier from being on the ice against Malkin’s line. The bad penalties and match-ups were two vital reasons why the Pens lost that series. If Bylsma attempted to fix this issue during the series, nothing was evident.

Bylsma has a fantastic offensive system. The Pens are always adjusting their offensive tactics ahead of the curve. With their scoring talent, there is no team with a group of defensemen who can shut down the Pens offense. At certain times though, the team seems to only pay attention to offensive details and ignores their defensive responsibilities. I’m not saying that Bylsma completely ignores defense, but most of the time, whatever he stresses about defensive play does not get through to his team. Bylsma needs to explore a different approach that shows better results at the defensive end, especially during the playoffs. Teams that have great forwards, like the Islanders and Flyers, are the teams that expose the Pens’ defensive deficiencies.

There are always complications with the Pens. Are these stressful times due to Bylsma’s coaching, or would all of these situations play out the same no matter who was behind the Pens’ bench? Sometimes when there are so many superstars on a team no coach can get his message across. Maybe Bylsma is doing a better job than any other coach would ever accomplish. If the Pens hoist a Stanley Cup at the end of this playoff season, we will have our official answer as to what type of coach we have in Bylsma. Until that time, is Bylsma a great coach or a product of his talented team?